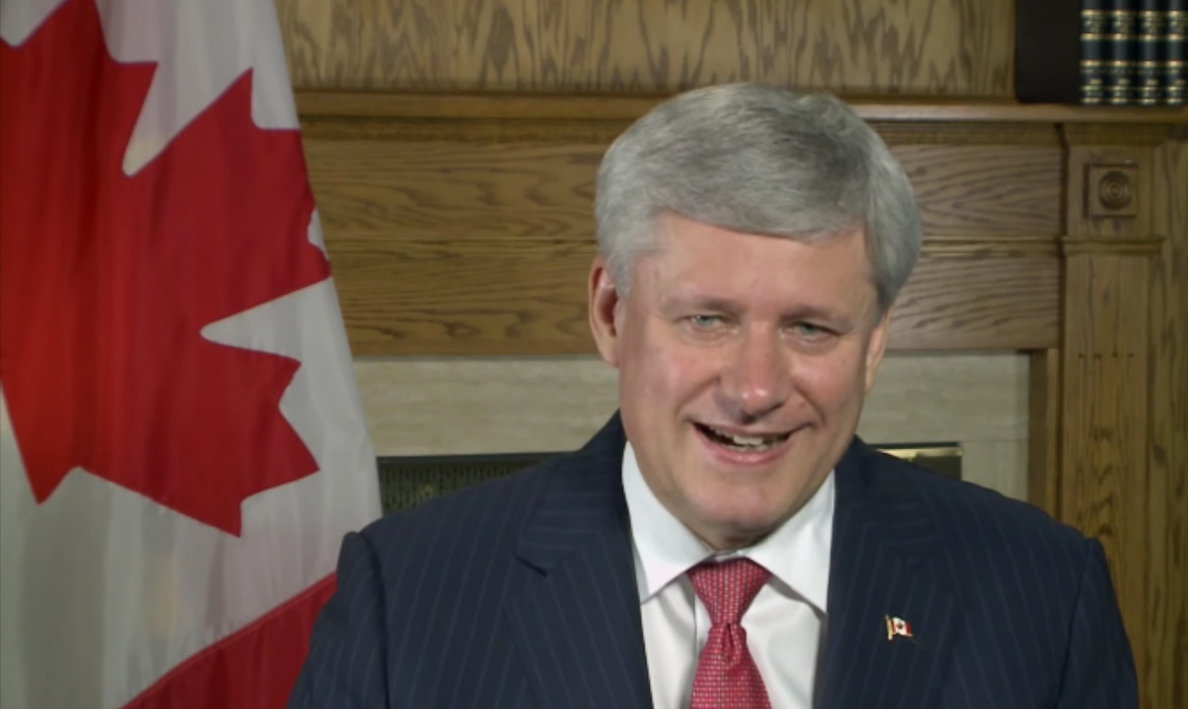 On one side stands an increasingly discredited government – closely allied with large corporations, especially those exploiting fossil fuels – driven by an aggressive, hard-line set of values which divide the world sharply into “good” and “bad” people and behaviors, and which appeal to a shrinking minority of citizens.

On the other side stands a growing mass of discontented citizenry, determined to reestablish more compassionate, flexible and inclusive values, returning Canada once again to its long-established role as a calm and even-handed presence in the world.

How will this situation work out?

Many Canadians no longer trust Stephen Harper. Nor do they trust the pronouncements of the Conservative government. Every statement made by the prime minister, or one of his senior officials, elected or unelected, is likely to be treated with suspicion.

Bill C 51, the so-called Anti-Terrorism Act, is widely viewed as having nothing to do with foreign terrorism, but rather to afford a means to crack down on domestic dissent.

Bill C-23, the so-called Fair Elections Act, is widely viewed as a means of curtailing voters unfavorable to the Conservative government.

When the leadership of a nation massages and shapes information so extensively that it is widely viewed to be unreliable, or to mask a hidden agenda, then citizens simply discount what the government says, and start to look elsewhere for their information.

Eventually, after mounting frustration, they begin to take action to correct this imbalance.

In the 21st century, in countries like Canada where outright violence by the government is relatively rare, and technology is relatively advanced, the battle between a mistrusted government and its citizens will not be fought primarily with guns, but with information – and especially information that leads to change.

Stephen Harper knows this, and that’s why the public relations budget for the Prime Minister’s Office has bloated up to over $263 million a year, in the face of widespread and occasionally draconian budget cuts across the rest of the federal government.

So how is this information war – already joined and in full-throated pre-election chorus – being fought?

A strangely familiar example from the Far East

The following story lays out some critical general principles, which I believe will apply in the short and in the long term to Canada, and to every other country in the world.

When a MERS (Middle East Respiratory Syndrome) broke out in Seoul, South Korea at the beginning of June, panic hit the city.

The government, shaped by a long tradition of dictatorship and information control that only ended in 1988, chose not to tell its citizens which hospitals had been visited by patients with the potentially deadly condition.

Because Park Soon-Young, like many Korean citizens, was deeply concerned about which hospitals were the safest to go to, the 26-year-old IT specialist gathered information about which hospitals and clinics had been involved with treating patients with MERS. Initially he “just wanted to share it with my friends and family”, but then, as public anxiety mounted, he published his information on a website called the “MERS Map”. On the site, a digital pin represented each institution visited by people suffering from the condition.

Within days, the website had 5 million hits, amounting to one in every 10 Koreans.

Within a few more days, the Korean government relented, and published its own more comprehensive and detailed information.

CBC journalist Tori Allen, visiting Seoul, interviewed professor Damien Spry, an Australian working on communications issues at Hanyang University in that city, and an informed observer of Korean politics. He noted wryly that this episode “raises the issue of who to rely on in the absence of a trusted authority.”

Or as one Korean citizen put it: “the government says it’s okay, it’s okay, but so many people doesn’t believe it.”

The Canadian government’s scientific experts have been shut down. Information about much of what the federal government is thinking or doing is only released through public relations apparatchik, usually by email, fax or some other indirect means.

Meanwhile, the Prime Minister’s Office is busily toiling away at changing the inner workings of Canada’s national system of governance, using the near-dictatorial powers of the PMO to their fullest extent.

In the “absence of a trusted authority” in this country, as in Korea, how can the public trust the government?

The new approach to deal with this national crisis, which will come to a head during the federal election, is the increasingly energetic citizen-driven sharing of the stories and the information that Stephen Harper and his senior advisers don’t want out in the public arena.

It means citizens compelling a meaningful response from Ottawa.

Or a regime change.

All other levels of government that operate in this secretive way (such as the BC Liberal government, which never fully explained why it fired eight healthcare researchers, then later pretended that there was an RCMP investigation of the matter) will eventually be on the receiving end of this kind of process.

Canadians have had enough, and are starting to take matters into their own hands.

One of the reasons why citizen advocacy is necessary and important is the simple fact that it actually works.

There are more and more examples, coming forward every day, that citizen actions, motivated by unassailable genuine data, are compelling governments at every level to change their tune.

Despite the often intimate relationships between large corporations and governments, and despite the vast wealth of these multinational business giants, ordinary citizens are able to bring accountability and common sense to the lexicon of regulators and legislators.

Here’s an example of how this works, and has worked, and will continue to work, on into the future.

On Friday, May 15, the City of Chilliwack disclosed that it had been offered $800,000 by pipeline giant Kinder Morgan, prior to the City making a comment to the National Energy Board (NEB) about its position on a proposed Trans Mountain pipeline, which Kinder Morgan wants to run through Chilliwack lands.

A local citizen's group, WaterWealth — fresh from playing an important role in stopping a toxic waste treatment plant from being constructed on the banks of the Fraser River — sprang into action over the weekend. With blog posts, emails and other communications, the group generated a storm of protest at this outrageous attempt to bribe Chilliwack’s Council and Mayor into a cooperative state of mind.

Faced with an animated citizenry, in attendance in numbers at the Council meeting four days later, Mayor and Council recognized that something was up.

But Chilliwack was different. Mayor Sharon Gaetz recognized this when she said:

“It would be ideal if Kinder Morgan had offered this after the NEB decision. It would have been ideal because somebody used the word ‘bribe,’ and I think that’s offensive. I think it’s very offensive frankly. Council does not accept bribes and never has.”

Councillor Jason Lum also recognized that there was a problem:

“It feels like… it would be akin to a developer coming prior to a public hearing and saying “Listen, I’m going to give you all this money if my project goes ahead” before the public hearing happens. We would never be able to do that.”

So recognizing the fact that Kinder Morgan was trying to sweeten the City’s pot with a few drops from its $130 billion pool, and despite, interestingly, a recommendation from City staff to accept the deal, Councillors voted against accepting the “bribe”, preferring to wait until after the NEB had made its decision.

The National Energy Board, for its part, has maintained a deafening silence on the issue of Kinder Morgan’s nefarious behavior, probably because Kinder Morgan, through its Calgary lawyers, has warned the toothless NEB to back off as it pursues other communities throughout the Lower Mainland.

So this is going to be the new normal.

Where governments and their corporate buddies are working together in this country to subvert the common good, using the kinds of morally questionable tactics that we tend to associate with corrupt governments in other parts of the world, they are going to be met increasingly by a wall of resistance from ordinary people – people who are attached to their home community or region – and telling them “this shall not happen.”

The world is changing. Everywhere ordinary people are rising up, most often in small groups or nonprofit organizations, to challenge the self-interest of governments and corporate players, whose economic model often ignores environment social concerns, and focuses solely on economic exploitation – of people and material resources – rather than cooperation and inclusiveness.

In recent years, a string of successes achieved by local nonprofit groups has dominated headlines around the country.

Here's a few of them.

A few years ago, a small group of citizens in Salmon Arm, BC held off the country’s biggest builder of shopping centers, SmartCentres, and the world’s largest retailer, Walmart, when the two business partners joined together to construct a 55 acre big-box center in the delta of the Salmon River. SmartCentres was restricted to 22 acres only, and the BC Ombudsperson, Kim Carter, made the story the centerpiece of a damning critique of environmental legislation in the province.

On the national stage, the Canadian government was shamed a few weeks ago into taking its sales taxes off menstruation products, thanks to a petition campaign with more than 70,000 signatures. The petition was so influential that at one point, female MPs in the Conservative Party threatened to boycott government business if action was not taken swiftly.

On June 22, a private member’s bill from Conservative MP Michael Chong sharply limiting the power of party leaders was passed by the Senate by a vote of 38-14, despite a last-ditch attempt by the Harper government to block the bill. Supporters of the bill, in a non-profit group known as Friends of the Reform Act, attributed the bill’s passage to a large extent to public pressure:

“Thousands of ordinary Canadians got involved with this campaign. They sent letters to their MPs and letters to their Senators. They shared information on Facebook and Twitter, and they talked to their friends about the importance of democratic renewal.” That such a bill – proposed by a Conservative back-bencher, and endorsed by all the Opposition parties, could make it past stiff government resistance was only possible with massive – and visible – citizen support.

The next few months before the federal election in October will be marked by a continuation of massive advertising by the Stephen Harper’s crew in the PMO, major public relations campaigns by large corporate players, and growing resistance and active advocacy efforts put forth by hundreds of thousands of Canadian citizens, as they speak about the values they cherish, and the changes needed to express those values.

And we haven’t even discussed climate change, the 565-tonne gorilla sitting in the middle of the planet’s ecosystem.

There can be only one outcome to this challenge.

The citizens of Canada are fed up, and will refuse to accept the smokescreen of PR that the federal government has put up for the last nine years.

Come October 19, the citizens will prevail.