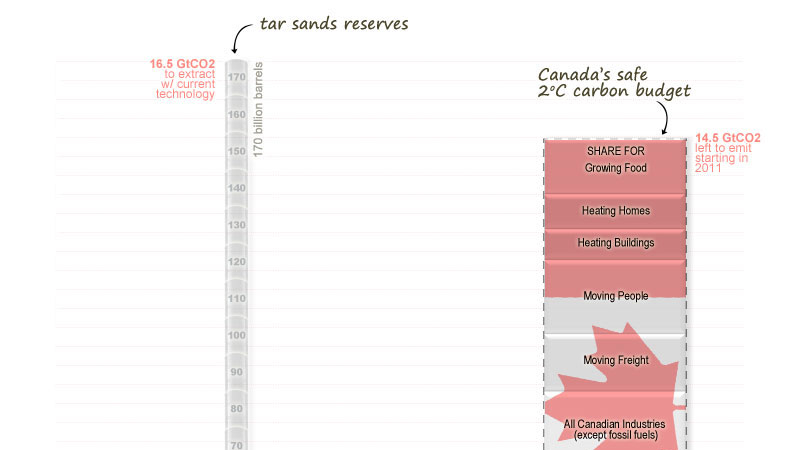 The Alberta tar sands contain a gargantuan 170 billion barrels of oil that are economically viable to extract using today's technology. Unfortunately, the climate pollution from extracting it all using current technology would exceed any safe and sane carbon budget for Canada. (See: "Tar sands vs Canada's safe carbon budget".)

If we Canadians live up to our fundamental climate obligations and promises, there will only be enough national carbon budget to extract a tiny percentage of tar sands reserves.

In this article, I'll first take a look at how much of the tar sands might be extractable under Canada's safe carbon budget. Then I'll cover the three main proposals to prevent the rest from being stranded in the ground.

How much tar sands oil can be extracted under Canada's safe carbon budget?

The major governments of the world, including Canada's federal government, have repeatedly pledged to keep global warming below a 2°C increase in an effort to prevent the worst impacts of climate change. To have a likely chance to do that, the International Panel on Climate Change (IPCC) says only around 900 billion tonnes of climate pollution (900 GtCO2) can still be dumped into our atmosphere. That is the world's 2°C carbon budget. (See: "The climate number that changes everything").

Based on our current emissions, a very generous share for Canada might be as high as 14.5 GtCO2. I call it "generous" because it means Canadians could continue to pollute at four times the global average, per person, to the very end of the fossil fuel age. Maintaining such an excess will be challenging.

But even such a generous share is still many times too small to handle the tar sands plans. By my estimates, less than a tenth of tar sands reserves could be extracted under it using current technology. And that could be used up in just 10 years at current expansion rates.

To extract more, the tar sands will need to either dramatically clean up their extraction methods, or else find "carbon offsets" from somewhere.

The options at a glance...

To illustrate how much tar sands oil could be extracted under a safe carbon budget for Canada, I created the chart below.

On the left is a stack of barrels showing the climate pollution to extract the tar sands reserves using current technology: ~16.5 GtCO2. That's roughly 1 GtCO2 for each 10 billion barrels.

As you can see at the bottom of the chart, the tar sands' share of Canada's safe carbon budget is far less than their plans require. It's only big enough to extract around 13 billion barrels — or eight per cent of reserves — using current technology.

The hunt for alternatives

To get more oil out of the ground, three main possibilities have been proposed so far. Here is a quick summary:

Here are more details on each proposal.

The most often mentioned "offset" for extra tar sands emissions is to rapidly phase out Canada's coal-fired electricity. That could free up some carbon budget for the tar sands to use.

The idea makes sense, but the potential benefit for the tar sands is limited. That's because Canada doesn't burn a lot of coal to start with. Only nine per cent of Canada's emissions today come from coal-fired electricity. So even if all Canadian coal burning were quickly shut down, it would only be a tiny part of what the tar sands need.

On my chart I illustrate an even more aggressive scenario in which the tar sands help fund an extremely rapid shift to 100 per cent clean electricity in Canada. That means quickly shutting down both coal and natural gas power plants. That might be able to free up enough carbon budget to extract another eight per cent of tar sands reserves using current technology.

So even a world-class clean electricity push could still leave nearly 85 per cent of tar sands reserves stranded in the ground.

The troubling reality is that Canada's entire economy doesn't have nearly enough 2°C carbon budget remaining to "offset" the tar sands plans — not even close.

With Canada's 2°C carbon budget clearly too small for what the tar sands want, the search for a lifeline has turned global.

The Harper government, long a fierce critic of carbon markets, is now looking to participate in global carbon markets to cover some or all of the oil sands emissions. To me, this striking shift in strategy is yet another indication that the world is now taking the climate threat much more seriously.

The Canadian provinces are also starting to look at global carbon markets. In July, all the premiers signed on to a new Canadian Energy Strategy that includes the objective of "reducing greenhouse gas emissions globally." The same week, the B.C. government released an outline for their new provincial climate strategy that includes expanding "access to global carbon markets."

The idea of paying other nations to clean up for you makes sense in principle. But left unresolved for the tar sands — and Canadian taxpayers — are all the big questions, including:

Q: Will there be enough offsets?

The tar sands might require as many as 15 billion tonnes of offsets just to extract their reserves (see chart above).

For scale, that would require purchasing nearly five per cent of the remaining safe carbon budget from all 175 nations that emit less than Canada.

And the tar sands aren't the only industry needing climate offsets to continue business as usual. In just one other example, the global airline industry has also decided to buy carbon offsets rather than reduce its own emissions. It plans to buy an estimated 13 to 20 billion tonnes of offsets by 2050.

And those two examples are just a tiny slice of the potential global demand for "carbon offsets." Consider that global reserves of fossil fuels are five times what will fit in the world's 2°C carbon budget.

The carbon market could turn into a multi-trillion dollar game of musical chairs in which many times more fossil fuel owners are bidding than there will ever be offsets for.

Q: Will they be affordable?

With the potential for demand to exceed supply, the price of offsets could become significant. I've seen "expert" studies quoting future carbon prices everywhere from one dollar to several hundred dollars per tonne. In other words, nobody knows. It will all depend on how many people try to buy offsets and how closely humanity sticks to a safe carbon budget.

Q: Who in Canada will pay for tar sands offsets?

The price tag for tar sands offsets could exceed a trillion dollars. Who will be expected to pay: the tar sands companies, or Canadian taxpayers?

It's not even clear if the tar sands could afford to pay. I've read multiple economic studies on the viability of the tar sands in a world staying below 2°C. Every one shows the tar sands struggling to be viable against a glut of cheaper-to-produce oil from elsewhere. Adding the costs of offsets would make the tar sands even less viable.

Canadians might want to keep a close eye on who's paying the bar tab for this party.

The initial push by industry was to develop less climate-polluting ways to extract tar sands bitumen. Industry and government invested in developing low-carbon technologies. And coal got replaced by natural gas.

For a while emissions-per-barrel did fall.

And as the agency points out, "there are several forces that are working to drive emissions intensity up in the future … (e.g. declining reservoir quality, aging of existing facilities, etc)."

One of the big climate solutions being currently tested is to eliminate natural gas burning and instead soften bitumen using radio waves powered by renewable electricity. And to eliminate climate pollution from diesel-burning there's talk of switching the big trucks and other heavy machinery to battery-electric versions, also powered by renewable electricity.

For the tar sands, it seems, ditching fossil fuels is the way to prosper in a safe climate future.

Here are the geeky details and various assumptions used in my chart and this article.

The major governments of the world, in an effort to prevent the most damaging impacts of climate change, have pledged to keep global warming below a 2oC increase. To have a "likely" chance to do that, there is only so much more carbon we can dump into our atmosphere. The world's most respected and authoritative climate report, the International Panel on Climate Change (IPCC) Fifth Assessment, lists humanity's remaining Carbon Budget at ~900 billion tonnes of CO2 (GtCO2) to have a "likely" chance of staying below 2C. This is their 450ppm scenario. For details, see: "The climate number that changed everything."

Canada currently emits 1.6% of global emissions. A 1.6% share of the global carbon budget would be ~14.5 GtCO2. This is what I used in my chart.

As noted, this is a generous slice of the global budget. For one thing, Canadians emit nearly four times more climate pollution per person (21 tCO2) than the global average (6 tCO2). So it is possible that we will be pressured to cut emissions faster than much poorer nations that pollute less per person. Canadians might also decide that cutting our dangerously excessive climate pollution levels down more quickly is the morally right thing to do.

For my chart, each sector's "fair share" slice of the carbon budget equaled their current annual share. Each sector's current annual share of national emissions was taken from Canada's 2013 official greenhouse gas inventory. Here are some of the main ones: 10% for growing food; 6% for homes; 6% for other buildings; 13% to move people; 11% to move freight; 12% to generate electricity (9% coal +3% natural gas); 14% all non-fossil-fuel industries; 4% waste and waste water treatment; 9% tar sands; 8% natural gas production; 6% conventional oil production; 3% downstream oil and gas; 1% coal mining.

PER BARREL:
Environment Canada Emissions Trends 2014 data shows that emissions in Canada per barrel are currently:

FOR ECONOMIC RESERVES:
My math for using current technology to extract all 170 Gbbls of tar sands economic reserves is therefore as follows:

USING SHARE OF CANADA'S 2C CARBON BUDGET:
The ~1.3 GtCO2 tar sands share of Canada's safe carbon budget would allow ~13 Gbbls to be produced using current technology. That is around 8% of current economic reserves.

The Alberta government estimates that 17% of bitumen will become economic over time. Producing that much oil using current technology would emit ~30 GtCO2 inside Canada. That is more than double Canada's 2C Carbon Budget. The full climate impact of producing and burning that oil would be ~180 GtCO2.

Climate scientist Dr. James Hansen estimated that half of the bitumen could become economic in the future. Producing that much oil with current technology would emit ~90 GtCO2 inside Canada. The full climate impact of producing and burning that much oil would be ~520 GtCO2. That is over half of the world's remaining safe carbon budget. In his words, "game over" for the climate.