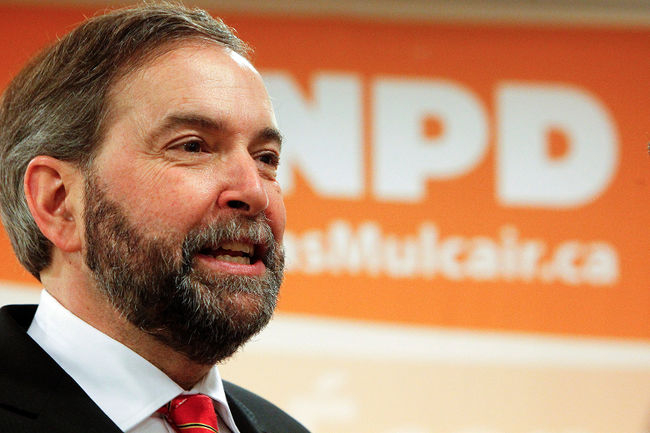 As part of his Ontario-wide Tour for Change, today federal opposition leader Tom Mulcair visited Amherstburg, where he pledged to revive Canada’s ailing manufacturing sector and give struggling middle-class families a leg up.

“The manufacturing sector that once supported Southwestern Ontario has taken a beating under Stephen Harper,” said Mulcair.

“Canada’s manufacturers and the communities that rely on them need a partner here at home and a champion on the world stage to attract investment. I will be that champion.”

Amherstburg’s Mayor Aldo DiCarlo brought the NDP leader to see some of the hardest-hit areas in his community. The two discussed the challenges local middle-class families have faced in the wake of hundreds of manufacturing job losses under Stephen Harper.

Mulcair highlighted his plan to encourage Canadian manufacturers to invest in innovation, research and development, and stable full-time employment by introducing the Innovation Tax Credit.

Part of Mulcair’s industrial plan includes developing and subsidizing renewable energy, a sector in which Ontario is already leading the way, through the building and export of solar panels and the upcoming implementation of a carbon cap and trade system that targets polluters.

“Mr. Mulcair has repeatedly talked about the need for Canada to become a leader in clean technology,” said spokesperson George Smith.

NDP industry critic Peggy Nash promised last month that if elected, her party would invest in public transit, renewable energy, and improving energy-efficient technologies, while making high-polluting industries pay for the ecological damage they cause.

Such investments may go some way to reversing the trend of falling incomes, rising household debt and unemployment, which Mulcair said has now risen by 200,000 after nearly 10 years of Stephen Harper’s government.

But the damage in Ontario is possibly even more extensive, as Nash previously said that a total of 400,000 manufacturing jobs in Ontario had been shed under both the Tory and former Liberal federal governments.

“Stephen Harper has the wrong priorities and his plan isn’t working. Instead of helping middle-class families get ahead, the Conservatives have given Canada’s largest and most profitable corporations billions in tax breaks and [have] done nothing to protect Canadian jobs,” said Mulcair.