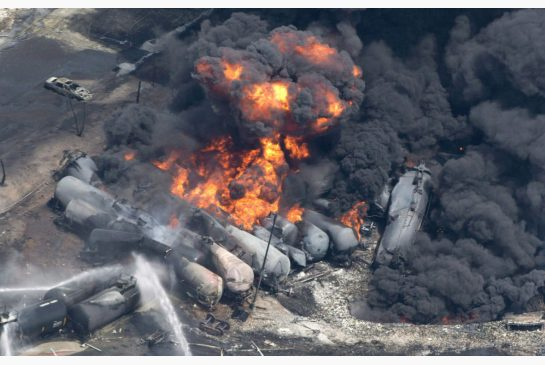 Crude oil boils up in a train derailment in 2013 in Quebec. The Canadian Press
Previous story
Next story

An oil field boom in North Dakota has turned a quiet agricultural region into an industrial zone, where farmers and ranchers report over 100 oil spills per month.

In a July 23 webinar, members of North Dakota’s environmental community spoke about the impacts of the second-largest fracking oil field in the United States, the Bakken Shale.

Earthworks, a non-profit American environmental agency, presented the webinar entitled "Inside the Bakken: National Impacts and How You Can Help."

One of the largest oil developments in the U.S. in the last 40 years, the Bakken Shale extends over eastern Montana, western North Dakota and into parts of Saskatchewan and Manitoba. While the oil was initially discovered in 1951, hydraulic fracking made it economical to put the field into production.

“Bakken oil is transported by oil and the vast majority of oil trains travel from North Dakota,” said Deborah Thomas, a board member with the non-profit group ShaleTest Environmental Testing, while introducing the speakers.

“These trains with their payloads of extremely explosive, fracked crude travel through communities across North America, putting millions of Americans and Canadians at risk.”

Just over two years ago, the air and hand brakes failed on one such train filled with Bakken crude. It careened at 104 kilometres per hour into the small Quebec town of Lac-Megantic, derailing near the town’s centre at 1:15 a.m. and spilling six million litres of crude oil.

The extremely volatile oil burst into flames and, with the subsequent explosions, killed 47 people, forced another 2,000 from their homes, and destroyed much of the downtown core.

Don Morrison told the webinar that before the explosion Lac-Megantic looked a lot like Bismarck, ND, where Morrison works as the executive director of the Dakota Resource Council.

According to Morrison, a study in July 2014 by the US Pipeline and Hazardous Safety Administration said Bakken crude possesses a higher gas content, higher vapour pressure, lower flash point and boiling point, all of which means it ignites easier and is more flammable.

“We’re working to get our state officials to take responsibility to make Bakken oil safe to transport by rail,” Morrison said.

But the deadly rail trains are far from the only problem which arrived with the oil boom. Morrison told the webinar that farmers and ranchers are reporting about 150 oil spills every month. One spill saw nearly one million gallons flood into a farmer’s field.

Gas flaring is another issue. Morrison noted that one rancher had a flare 800 feet from his house go out seven times, filling his home with gas and causing respiratory and other health problems.

For people who live near wells, waste dumps, pipelines, or rail lines, their homes have decreased in value.

Wayde Schafer, a conservation organizer with the Dakota Sierra Club, talked about the natural gas wasted through flaring. In the first quarter of 2014, 36 per cent of all natural gas coming out of the ground was flared off. Schafer observed the national average for gas flaring is one per cent.

Because the price of natural gas is far less than oil, the energy companies argue it’s not economically feasible to capture it, according to Schafer. Under new regulations that have cut back on flaring, North Dakota still has 12,000 producing wells flaring at 18 per cent.

“The natural gas from the Bakken does not have to be flared,” Schafer said, calling the choice to do so a “selfish economic choice of the oil industry’s.”

Rather, he said, the gas could be captured, processed and used to provide electricity for heating homes and powering industry.

Martin Mock, the senior pastor with the First Lutheran Church in Williston, ND, addressed the social cost of the Bakken boom—which with falling oil prices, is now turning into a bust.

He cited a large gap between the wealthy and the poor, noting that the cost of living in the region is almost as steep as Hawaii. “Based on the high-five-figure and low-six-figure incomes, people can live here, but people living in the service industry are struggling to make ends meet,” Mock said.

Jobs are available in the service industry, but workers don’t earn enough to pay the upfront housing costs. Many workers live in “man camps” featuring row upon row of run-down trailer homes.

In Williston alone, 126 children are homeless, yet the area has no homeless shelter. In 2013, 62 people committed suicide. Mock said the legal system is stretched in every area.

Allison Ritter, a public information officer with the North Dakota Department of Mineral Resources, addressed some of the concerns raised in the webinar when contacted by the National Observer.

As of April 1, 2015, Ritter said, oil producers in the state are required to install and use oil-conditioning equipment to reduce the vapour pressure of all Bakken crude for transport. The goal is to produce crude that does not exceed vapour pressure of 13.7 pounds per square inch (psi).

National standards place oil with a vapour pressure of 14.7 psi or less to be stable.

In the Lac-Megantic spill, the crude had a vapour pressure of 9.3 psi. But Ritter said the Transportation Safety Board of Canada questioned the validity of the sample taken from the tank cars. “In addition, the timing, source, sampling and analysis of the samples have raised numerous questions about the results.”

Regarding gas flaring, Ritter said the state intends to reduce the percentage of gas flared, as well as the volume, duration and number of wells flaring. By 2020, companies must reduce flaring to 10 per cent with a potential of further reduction to five per cent.

She said the flaring points to the need for more pipelines, noting that roughly 12 to 13 per cent of the gas flared is connected to pipeline infrastructure that is undersized or compressed.

Addressing oil spills in the state, Ritter said $1.5 million has been allocated toward an analysis of crude oil and produced water pipelines. The Energy and Environment Research Centre will look at construction standards, depths, pressures, monitoring systems, and maintenance, among other things.

This will result in a report with recommendations by December 2015. “The industrial commission will then adopt the necessary administrative rules necessary to improve produced water and crude oil pipeline safety and integrity.”

“If you have trains carrying Bakken oil coming through your communities, learn as much as you can about where that oil is coming from, what it means, what could happen if it explodes in your area,” Morrison said.