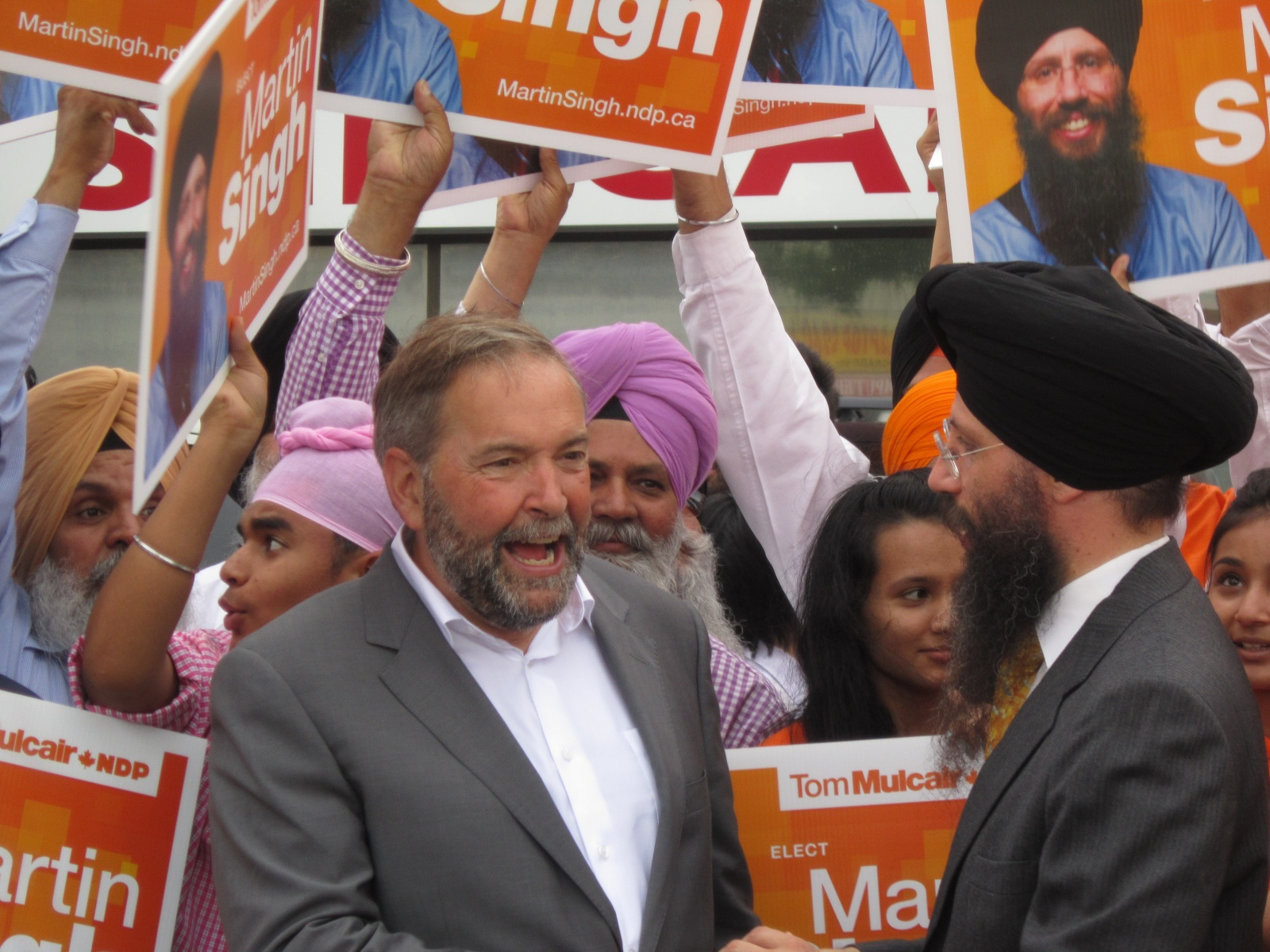 A deafening drumbeat whipped an already fevered crowd into a roar as Thomas Mulcair strode upon the stage like a conquering general, surveying the orange-clad troops ranged before him.

The ‘orange army' seated before Mulcair was a typically Canadian mosaic united under the NDP’s banner, including Punjabi-speaking Sikhs, middle-aged Caucasians, and a smattering of Asians, all of whom waved orange banners in an atmosphere laden with adrenaline, sweat, and a driving faith that Mulcair may yet be 24 Sussex Drive’s next resident.

Mulcair wasted no time in revving up his eager footsoldiers at the Brampton leg of his Ontario-wide Tour For Change on July 25, denouncing Stephen Harper’s tax cuts for the wealthy and his 59 Senate appointments as hypocritical, after his previous pledges to abolish an institution that has only become more scandal-plagued since the Conservatives first took office in 2006.

"Only the NDP has the credibility and the determination to get rid of the unelected, undemocratic, Senate," said Mulcair.

Having castigated Harper’s handling of the Senate, Mulcair made his pitch to Brampton’s middle class, promising to restore funding to Canada Post, provide tax incentives to small businesses instead of large corporations, and touched on the issue of skyrocketing student fees and childcare costs that are helping to hold back an entire generation of Canadians.

“For the first time in our country’s history, current generations will be worse off than their parents. Clearly Mr. Harper’s plan is not working, and whether you’re a small business owner in Mississauga, a young family just starting out in Caledon, or a manufacturing worker here in Brampton, you are part of an ever-growing community who want to bring change in Ottawa,” said Mulcair.

One major part of that change is renewed investment in Canada’s crumbling infrastructure such as roads, bridges, and transit that is becoming increasingly overcrowded in many communities.

A case in point is Blackfriars Bridge in London, Ontario, closed to traffic since 2013 for safety reasons, which Mulcair used as a backdrop to his address in that city just one day before he visited Brampton.

Such a strategy would include $1.3 billion being invested into transit every year and would create more than 31,000 middle class jobs in construction, manufacturing, and transit operations, a promise that was received by yet more cheers from Bramptonites battered by a lack of well-paying work and ever-rising living costs.

“An NDP government will be ready on day one to do its share to improve our nation’s infrastructure and get Canadians moving and that means shorter commute times for the people of the GTA,” said Mulcair to yet more cheers from his enthusiastic troops.

Getting people moving with shorter work commutes will be just one reward for Canada’s small businesses, for whom the NDP proposed cutting small business taxes from 11 to nine per cent in Parliament that the Tories voted against, only to put his party’s tax cut plan into their own budget just weeks later.

“After years of getting Canada’s largest and most profitable corporations billions in tax breaks, it’s time we rewarded small businesses who create 80 per cent of the new jobs in this country. Those small businesses are the backbone of our local communities,” said Mulcair.

However, Mulcair only mentioned the environment once in passing during his Brampton address, linking it to his policies of investing in infrastructure and the middle class in building a better Canada

Despite the seemingly short shrift given to environmental issues in Brampton, Mulcair’s industry critic Peggy Nash promised last month that if elected, her party would make high-polluting industries pay for the ecological damage they cause.

The NDP also intends to subsidize green energy if elected, while Mulcair himself has previously discussed the need for Canada to become a world leader in developing clean technologies.

Even so, the environment was not top of mind for federal NDP candidate Yvonne Kelly, who is running on a platform of improved public services, affordable housing, creating middle class jobs, and pushing for a $15 minimum wage.

“We want to see fairness, we want to see good jobs, not the precarious part time low-paying jobs that have been developed over the last 10 years under Prime Minister Harper. We want to see quality childcare, people are paying up to $16,000 a year for one child and that’s not allowing people to make ends meet, let alone get ahead,” said Kelly.

NDP member Sheila Koffman said that C-51 was a major issue for her and said that it resonated especially strongly in a community like Brampton that has a high number of recent immigrants.

Mulcair himself did not touch on C-51 during his address, but the NDP have promised to repeal it if elected, alongside C-24 that allows dual nationals to be stripped of Canadian citizenship without any dual process.

While such developments worried Koffman and her fellow NDPers, she was still confident that her party will turf Harper out of office come Oct. 19.

“I hope it sends a message that he’d better be scared and that we’re going to defeat him and he’s done,” said Koffman.

But Harper may not be done quite yet, as the CBC’s poll tracker shows Tory and NDP support tied in a dead heat at 31.3 per cent each as of July 24, while Justin Trudeau’s Liberals trail at 26.3 per cent. This leaves the NDP down by 1.1 per cent and Tory support boosted by 1.9 per cent, since the last update on July 16.

Possible reasons for a Tory bounce include the recent mail-out of Universal Child Care Benefit cheques.

The latest poll from Forum Research will be more heartening for NDPers like Koffman, as it shows NDP support running at 34 per cent, compared to 29 per cent for the Liberals and 28 per cent favouring the Conservatives. Such a result would allow Thomas Mulcair’s party to form a minority government.