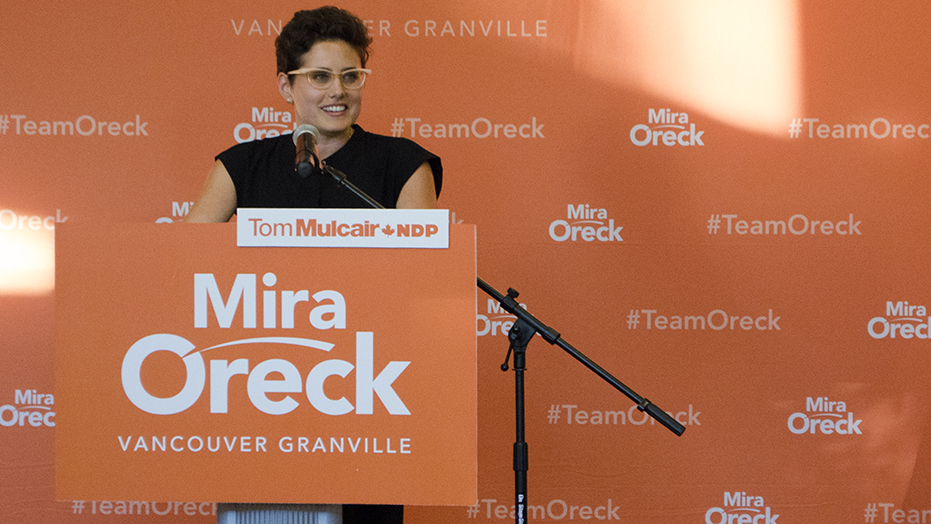 Zoe Oreck slowly walked up the stage when she was called to give a speech during her great-niece Mira’s campaign launch.

“She is by far the most competent candidate we could ever have,” she passionately told the audience. “Do I think Mira might be one of our best MPs there? You bet I do!”

Mira Oreck, the director of public engagement at the Broadbent Institute, announced her nomination as the New Democratic Party’s candidate in the new riding of Vancouver Granville for the upcoming federal election in a public event celebrated at the VanDusen Botanical Garden.

During the event that also featured speeches by former BC NDP Leader Joy MacPhail, former NDP MP Dawn Black and her great aunt, Oreck addressed a crowd of about 200 people who had gathered to support her candidacy.

“We are at a pivotal moment in Canadian history. The NDP is poised to offer a vision more relevant than ever for a truly progressive Canada,” she said during her speech.

“You will see a government committed to economic and environmental innovation, one that acknowledges the desperate need to renew our economy by eliminating subsidies to the fossil fuel industry and investing in clean technology and energy.”

Oreck began her career as an environmental advocate with Friends of the Earth in Washington DC. She then went on to work with some of Canada’s most senior environmental organizers on the Great Bear Rainforest campaign in British Columbia.

Oreck has also worked as a developer of media-based campaigns for social change non-profits and political organizations in the U.S. During the 2012 American presidential election campaign, she co-produced two of President Obama’s most widely-viewed online videos.

Getting young people to vote

During Oreck’s campaign launch, attendants had the chance to enroll themselves as volunteers and also to donate money for the campaign.

David Berson was one of the donors. Berson met Oreck about 13 years ago, when she interned at his office. He remembers her as not only a hard worker, but also as someone who always had a positive attitude towards life.

“Mira is a very welcome, inspiring, intelligent candidate for this riding. I want to do everything I can to help her to win,” he said. “I think that she is young, dynamic and she will attract young people to get out, vote and get more involved in society.”

Oreck, who is 36 years old, believes her age can be an asset to fuel interest in politics among youth.

“I think the first way to engage young voters is by actually being a younger person running for office,” she told the National Observer after the event. “I think people need to see themselves in their elected officials.”