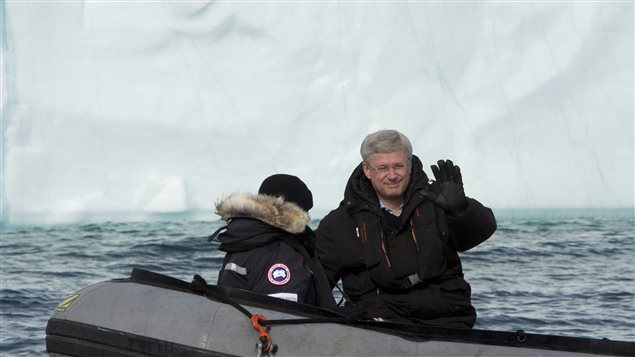 Prime Minister Stephen Harper and his wife, Laureen, take a closer look at an iceberg west of Pond Inlet on Eclipse Sound in August 2014. Photo by Canadian Press.
Previous story
Next story

The Conservative Party has announced a targeted series of new measures to protect Canada’s environment by promoting hunting, angling, and snowmobiling tourism and supporting the country’s gun owners.

Seeking to build on his “historic” conservation record, Prime Minister Harper promised voters that if re-elected, he would invest $9 million over three years to Destination Canada, which would bring more American recreational hunters, anglers and snowmobilers to the north.

"These initiatives will help to protect Canada’s natural environment and support economic development and new jobs across the country," he said in an early September statement from Whitehorse. “By partnering with angling, hunting, and conservation groups, we can ensure that our conservation efforts are good for the environment and good for local economies.”

In addition to the financial investment, Harper committed to creating a Wildlife Conservation and Enhancement Program that would improve habitats for common game animals. The initiative would launch in 2017 on a $5-million annual budget and restore wetlands for ducks and migratory birds, control burns to sustain moose, and implement a timber rotation for wild turkey.

“If you love the outdoors, you protect it — for your children and grandchildren,” said Manitoba’s Candice Bergen, Conservative candidate for Portage-Lisgar, in a supporting email. “Conservatives have always known that hunters, anglers and sports shooters are some of the strongest conservation advocates around.”

In fact, most of the party’s new conservation measures target gun owners and hunters specifically — if brought back for a fourth term in power, the Tories would also modernize migratory bird regulations to allow family hunting permits and permit use of crossbows in hunting Canada-wide. Crossbows are currently illegal in Newfoundland and the Yukon, where Harper made the original announcement.

He further promised to ensure adequate firearms training throughout the country and uphold his opposition to the Liberal long-gun registry, which he abolished in 2012 for imposing “unnecessary burdens on firearms owners.”

"Any attempt to bring back the long-gun registry, as Mr. Mulcair advocates, would cost billions of dollars and be no more effective than the previous Liberal plan," said the prime minister. "Justin Trudeau and Thomas Mulcair would almost certainly return Canada to the confrontational policies of the past, which were not only costly and ineffective but were disrespectful of rural Canadians."

The entire plan would build upon his 2014 National Conservation Plan, he added, which included $252 million in spending over a five-year period to conserve Canada’s lands and waters, restore ecosystems, and connect Canadians to their environment.

So far, other environmental commitments of the Conservative Party platform include extended partnership with the Pacific Salmon Foundation by investing $15 million to conserve key B.C. estuaries and preserve the lower Harrison River’s salmon ecosystem, a May 2015 pledge to lower greenhouse gas emissions by 30 per cent below 2005 levels by 2030, and an agreement with other G7 nations to eliminate use of fossil fuels by the end of the century.

Stephen Harper protecting the environment? (And my mother was a sumo wrestler…)