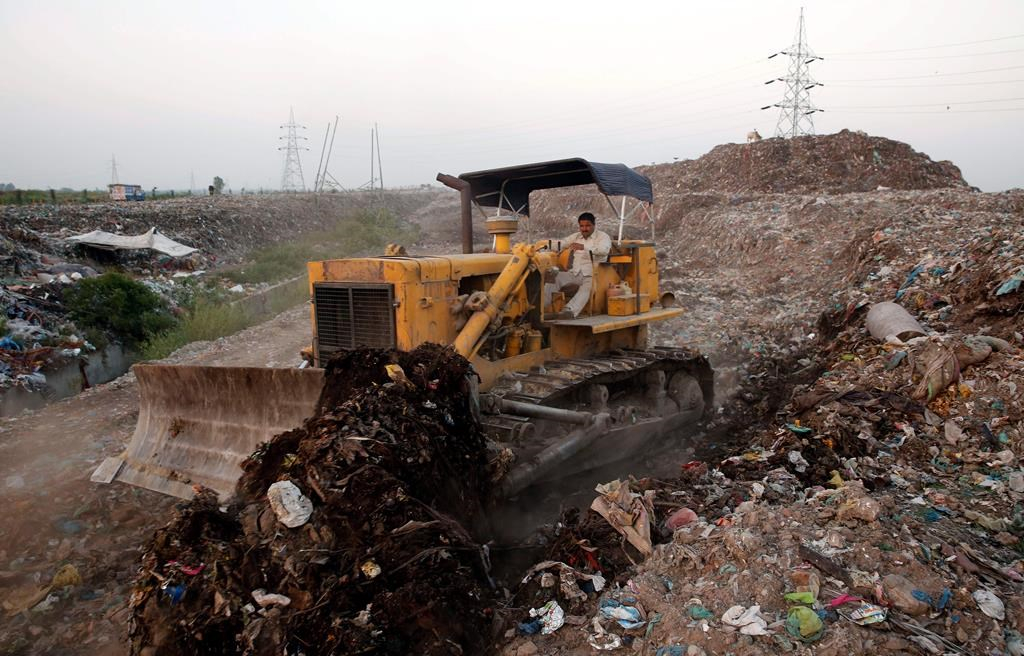 NEW DELHI — India will confirm plans next week for a fivefold increase in renewable energy by 2020, the environment minister said. But it will continue to champion poor countries in their demand that industrialized nations assume the brunt of responsibility for decades of climate-warming emissions.

Describing poverty as a key source of global pollution, Prakash Javadekar told The Associated Press on Thursday that nations hoping to reach a global climate pact in Paris in December must commit to a world where all 7 billion-plus inhabitants have equal rights and access to electricity, opportunity and justice.

"Poverty is, in a way, a real polluting factor," Javadekar said, adding that India's top priority is elevating hundreds of millions of Indians still living on less than $2 a day. At the same time, expanding the economy and building infrastructure will cause carbon emissions to grow, as the country relies on burning coal to fuel most of the 254 GW of electricity it generates today.

India is one of the last major polluters yet to submit its plans for combating and coping with climate change to the United Nations, before the world's nations attempt to nail down a global climate pact in December. As Prime Minister Narendra Modi joins other world leaders at the U.N. General Assembly meeting Friday, experts and officials are eager for India's climate commitments.

Already, countries and territories accounting for at least 60 per cent of global emissions have announced their targets, including the world's No. 1 and 2 polluters, China and the United States. But experts say the pledges so far fall short of what's needed keep temperatures from rising more than 2 degrees Celsius by mid-century — a level beyond which scientists say we'd see extreme climate changes, including sizzling hot summers, much higher sea levels, torrential storms and more severe droughts. Current national pledges put us on track for a 2.9 to 3.1 degree temperature rise.

On Thursday, Indonesia submitted its pledge to the U.N., vowing to strengthen forest protection and increase renewable energy production to account for at least 23 per cent of the Southeast Asian island nation's total capacity by 2025.

Experts have worried that India's position could doom global efforts to limit the rise in temperatures.

"India for a long time has been resistant to the notion of developing countries taking targets at all," former U.N. climate chief Yvo de Boer said Thursday in Paris. "Modi has indicated he wants to make a very big push on the economy, focus more on manufacturing. There's a lot of coal in India so the logical fuel for him to choose in driving that growth is coal. If he takes an ambitious climate target, that means he wants to balance that growth with climate ambitions."

Javadekar said the Indian pledge on climate action will be released Oct. 1, and will include targets not only for increasing renewable energy but also for curbing its emissions intensity, or how much carbon dioxide the country produces divided by its GDP. In 2009, India said it could cut emissions intensity by 20 to 25 per cent below 2005 levels by 2020. Javadekar indicated the new intensity target would be more ambitious, but he would not give details.

"Nobody has actually asked us for this ... because they know India's particular situation," the minister said, alluding to India's relatively low emissions rate of 1.6 tons per capita compared with a U.S. rate that is about 10 times higher. While the U.S. and China, emitting around 7 tons per capita, pledged to bring theirs to a common 12 tons per capita by 2030, India "will never reach there," Javadekar said. "I don't see going beyond 10 any time soon."

India's plans for a fivefold boost in renewable energy, from about 34 GW today to 175 GW by 2020, had been promised earlier by Modi as he vowed to bring universal electricity access to India's 1.2 billion people by 2020. The 175 GW goal includes 100 GW of new solar power, 60 GW from wind, 10 GW from biomass and 5 GW from small hydropower dams.

It's an astonishing pledge, considering where India is today. A quarter of the country, or 300 million people, still has no access to electricity, while hundreds of millions more make do with just a few hours a day. Blackouts are so common that hospitals and many businesses are forced to use diesel generators, while about a quarter of the 254 GW being produced today is lost in grid leakages and theft.

Experts estimate it will cost at least $150 billion for India to sort out its electricity woes and meet the renewable energy target — funding India does not have. Instead, it will rely on building business opportunities, and will hope for international commitments in waiving high intellectual property costs for technologies that can help India improve its energy production and efficiency.

"We definitely will expect a good amount of technology, affordable technology," Javadekar said. "Why people should profit from disaster? They should actually help India to build this huge program, making it a reality."