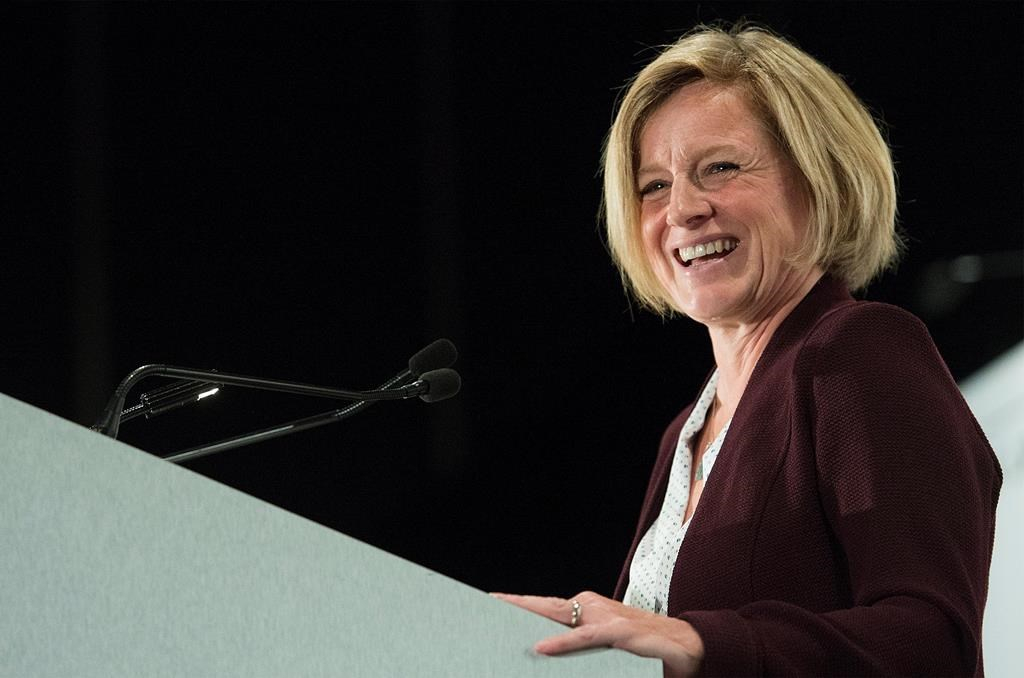 MONTREAL — The federal NDP's national cap-and-trade proposal may not be suitable for Alberta, the province's NDP premier said Monday.

Rachel Notley, on the first leg of a business trip to Montreal, New York City and Toronto, said a national cap-and-trade system to reduce greenhouse gas emissions in Canada "may not be our best road forward."

The Alberta premier's words run counter to the plans of her federal counterpart, Tom Mulcair, who proposed on the federal election campaign trail over the weekend a national policy of cap and trade.

"We may therefore address climate change using different tools than Ontario and Quebec will use," she said in a speech to business executives, referring to those provinces' deal to work together to cut emissions with a cap-and-trade system.

Mulcair's proposal would allow provinces to opt out if their efforts to minimize carbon emissions are as good or better than those of the federal government.

Notley took no questions after her speech.

The Alberta premier also said her government intends to do a much better job at living up to its responsibility to be part of the solution on climate change.

She said that if her province "doesn't get it right on the issue, a solution is going to be imposed on us — sooner or later — by others. By the federal government, and by our markets, who will increasingly insist that energy products they buy be mined and processed responsibly."

Notley said a climate-change review panel in Alberta will look at ways to phase out the use of coal as quickly as possible but without imposing unnecessary price shocks on consumers.

She noted that the province is heavily dependent on coal for its electricity, with 55 per cent of it coming from coal-fired plants.

"Air pollution and poor air quality is a direct threat to the health of our children and our seniors," said Notley.

She also stressed the importance of renewable energy and energy efficiency.

"Alberta is the only jurisdiction in Canada without an energy efficiency program," she said. "That is unacceptable, and we will change this."

"The net price of carbon in Alberta has increased but still remains relatively low," she said.

"But we have demonstrated that it is possible to act meaningfully on carbon pricing for sound economic and environmental reasons, without triggering economic hardship.

"We must do this, so that we have the means to diversify and broaden our economy in the years and decades to come, as the world evolves towards a decarbonized future."

Her comments came a day after news of a report that said hiking Alberta's carbon tax is the best way to reduce the province's greenhouse gas emissions from power generation.

The government-funded analysis, which was obtained by The Canadian Press, said charging large emitters up to $50 a tonne for carbon emissions — an almost 70 per cent increase — would produce the best result.

But that price would also raise electricity costs more than any other option considered, the Brattle Group concluded.

The study, which has not been released publicly, was delivered to the province's Energy Ministry and electrical regulator in July 2014, before the last provincial election. It is now before the climate-change panel, which is charged with designing an overall policy for Alberta in advance of international talks in Paris this December.