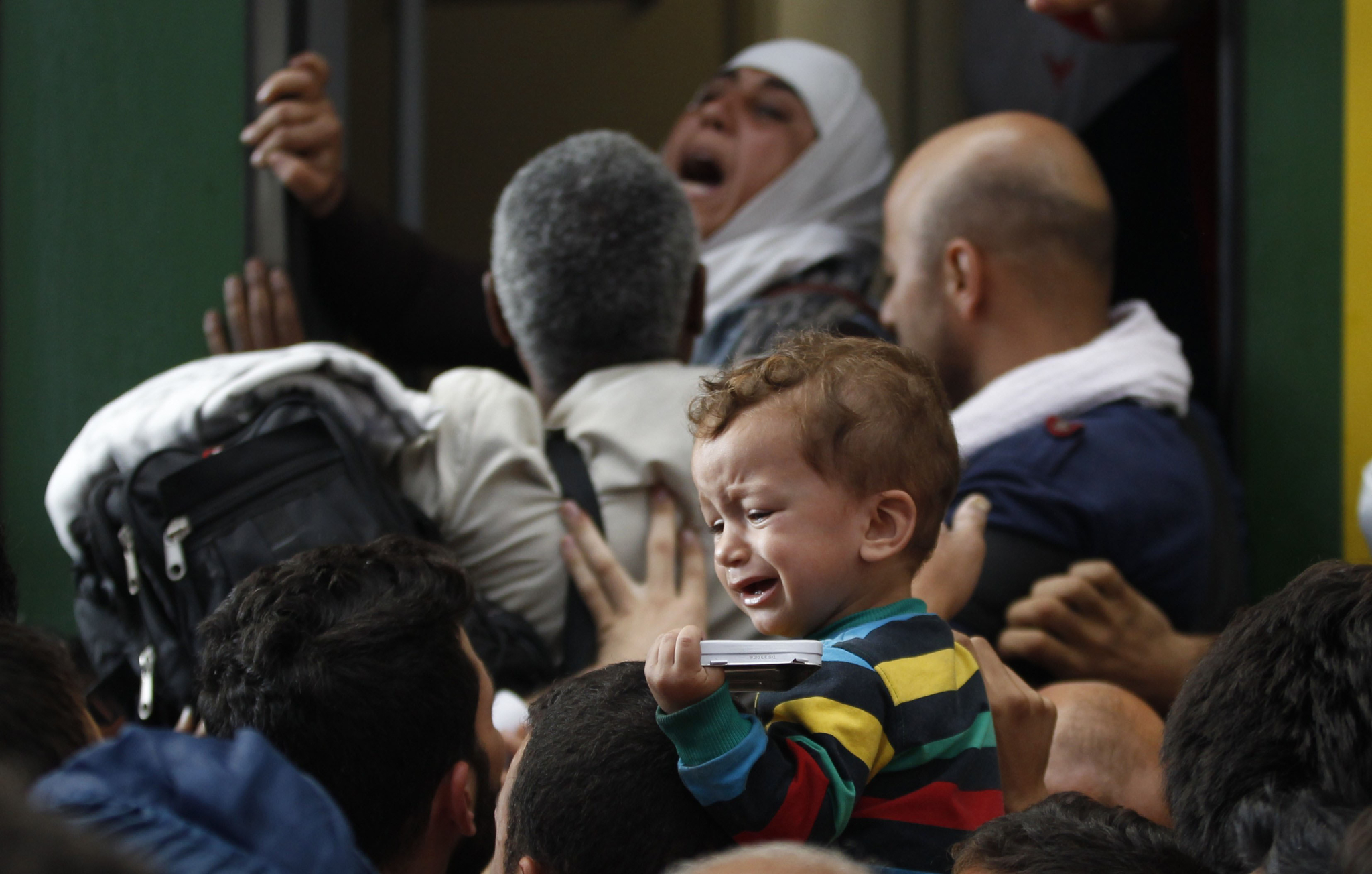 Tima Kurdi, aunt to drowned toddler Alan Kurdi, travelled from Canada to Turkey in 2014 to see him and other family members. Shocked by the suffering she saw in the Syrian refugee community there, she went door-to-door begging for supplies and food from local residents.

“It changed my life,” she told The Vancouver Sun.

Kurdi is a Canadian hero, one of many who are struggling to survive as newcomers in a tough economy. These Canadian citizens and permanent residents maintain vital links with extended families abroad who live under often-horrific conditions: wiring them money, filling out onerous and often opaque sponsorship forms on their behalf, dealing with a Citizenship and Immigration bureaucracy straight out of Kafka—and supporting traumatized children, if they are lucky enough to get them here.

There are thousands like Kurdi mending the torn fabric of the world, doing far more than their share to prevent a lost generation. But Canada has not been doing its part to support them. Instead, we’ve been dismantling Canada’s refugee and immigration policies piece by piece.

“We have been quite systematically re-orienting our immigration over the last several years to make it more focused on economic needs and focused on more long-term labour market needs,” Prime Minister Stephen Harper told The Wall Street Journal last year.

Thirty years ago most of our immigration was via family-class sponsorships. Now, far fewer family members qualify and the application process is more difficult, resulting in a 20 per cent drop in family-class immigrants within the first five years of the Harper government.

Family-class sponsorship is a completely separate process from refugee claims. It makes sense that it would be easier to settle newcomers who have economic and social family support—and it makes sense in terms of ensuring a strong community for children, parents, spouses, nieces and nephews and siblings who join their relatives in Canada.

But under the Harper government’s current family-class rules, children over eighteen are no longer permitted—and neither are nieces, nephews or siblings.

“People come in and say, ‘I can’t sleep at night, my mother is living in Aleppo and I’m worried a bomb will fall on her house,” lawyer Lorne Waldman of the Canadian Association of Refugee Lawyers (CARL) told The Globe and Mail this month. “Anyone who is Syrian in Canada is desperately trying to get their relatives out.”

Rather than support the eminently sensible process of family reunification to guide the speedy settlement of those fleeing conflict, both family-class sponsorships and refugees confront red tape and agonizing waits, and find their claims rejected for reasons that often are unclear and seem arbitrary or based on technicalities. (Once a refugee’s claim is denied, she or he may apply for a Pre-Removal Risk Assessment as a last-ditch attempt to avoid deportation, but the rejection rate for these is 98.6 per cent.)

With roughly 41,000 Syrians in Canada, the government—or a new government, after Oct. 19—should use the authority it already has to re-open the process to a less restrictive definition of family, and to dramatically speed up reuniting families by issuing temporary residence permits.

In this way, and with faster security checks, we could bring hundreds or thousands more people to safety within weeks. The Canadian Council for Refugees and Amnesty International, along with CARL, have already called for such temporary residence permits to be issued.

The Harper government has undermined immigration and refugee policy in many ways that are relevant to a crisis situation like this one. One of the most egregious changes was imposition of a morally bankrupt list of “designated countries of origin” that the government considers “safe” countries.

This includes Mexico, where, for example, a search for 43 disappeared students resulted in numerous awkward findings of other, unidentified bodies; and Hungary, where violent persecution of the Roma is well established.

Refugee claimants from these countries have been processed and rejected at high speed, with no right to appeal—a key aspect of any accountable system—before they’re shipped back to the often-hellish situations they’ve left. (A federal court decision found the lack of appeal process to be unconstitutional. Predictably, the Harper government is appealing this decision.)

Meanwhile, we’ve put public health at risk by cutting health services to refugee claimants waiting in Canada for a decision on their cases. A Federal Court found these 2012 changes to be unconstitutional as well, and again, the Harper government is wasting taxpayers’ money appealing the decision— instead of, say, using it to fund overseas visa offices in Turkey, Jordan and Lebanon (or the Central Processing Office in Winnipeg that handles private sponsorships for Syrians).

A new federal government should make it a priority to honour international agreements in which Canada, thanks to Harper, has refused to participate. In 2013, for example, we pulled out of the UN’s Convention to Combat Desertification, and are now, bizarrely, the only country not part of it.

We have declined to ratify the UN’s Optional Protocol to the Convention against Torture. We have refused to sign the Arms Trade Treaty or the Optional Protocols on Children’s Rights and the Rights of Persons with Disabilities.

All of these are relevant to the “push” factors driving refugees.

Help refugee families— and free them from Canadian prisons

This month twelve organizations— who together can rightly claim expert status on refugee issues in Canada—released their set of recommendations for an appropriate Canadian response to the plight of Syrian refugees.

Anyone hoping to ride the wave of popular concern to 24 Sussex would do well to take note. The recommendations are focused and practical.

Besides calling for 10,000 Syrian refugees to be admitted by the end of this year, they demand that refugees be admitted based on UNHCR-identified need—not on the basis of their religion, Harper-style. They have also insisted that resettlement efforts focus on reuniting families, and that administrative requirements for private sponsorships be loosened.

Both NDP and Liberals have continually updated their promises of numbers and timing. Right now, both pledge to meet or exceed the organizations’ target numbers by the beginning of 2016. The NDP promise to admit 10,000 Syrian refugees this year and 9000 per year over coming years; the Liberals have promised 25,000 by January.

The recommendations call for these numbers to be additional to, not at the expense of, regular immigration commitments. A new government should ensure that these commitments do not displace other refugees—and that other refugee applications are not delayed, and other refugees penalized, in order to expedite Syrian refugee private sponsorships. This, unfortunately, is the current situation.

Canada should respond to UNHCR’s request to issue more student visas, work permits and other documents that would allow Syrians to get to Canada even temporarily. And given the urgency of the situation, refugees being privately sponsored should not face the requirement, instituted by the Harper government in 2012, that their applications first be approved by UNHCR.

Immediacy is critical, and we need multiple levels of government to work together.

With this in mind, Canada should heed the call of the Canadian Immigrant Settlement Sector Alliance (CISSA) to quickly enact the first part of the Emergency Refugee Contingency Plan—developed in 2002 following the Kosovo crisis— that puts on alert "Canada’s current 36 refugee reception centres, sponsorship agreement holders, and the Ministry of Defence in the use of Canada’s military bases for possible immediate relocation of Syrian refugees from Europe, and consulting with Provincial Ministers responsible for immigration."

A proper response to the Syrian crisis will involve all of these short-term responses to a desperate situation. It will also some more long-term responses.

First, restoration of immigration policies that have been intentionally decimated by the Harper government.

Second, a review of unjust and wasteful actions, such as the imposition of policies and laws likely to be found unconstitutional, or like the current indefinite and in some cases mandatory detention without charges of some 11,000 refugees and other migrants with irregular status. This number includes hundreds of children, who with their families have been jailed without criminal charges, sometimes with the regular criminal prison population, for years on end.

This federal election, we need to elect a government that will respect and support people like Tima Kurdi, rather than undermine them. We’d all sleep better at night knowing we’d brought in a federal government that would do Canadians proud.