10 questions on the new Trans-Pacific Partnership deal: What it does, doesn't do 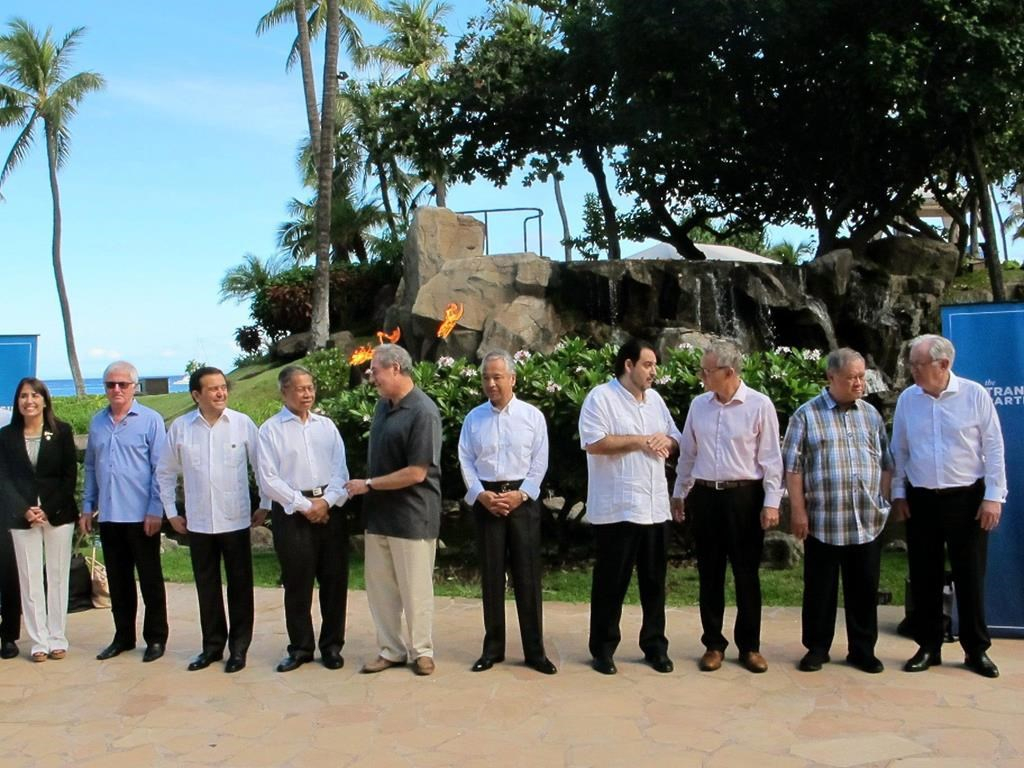 ATLANTA — A historic new trade agreement was announced Monday, which is certain to prompt a spirited political debate in a number of countries — starting with Canada's election.

Here are 10 questions about the Trans-Pacific Partnership, answered:

Who's in it? Brunei, Chile, New Zealand and Singapore started the project years ago. The United States, Canada, Mexico, Japan, Vietnam, Australia, Peru and Malaysia are now joining, bringing the membership to 12 countries. More have expressed interest in entering later, including Colombia, Thailand and South Korea.

How big is it? It's the biggest trade zone in the world, spanning four continents and representing 40 per cent of the world's economy — a far higher share than the European Union.

Is it more important than the EU? Not even close. Europe has truly open borders, allowing a free flow of people and products from one country to another. This simply changes regulations, and reduces trade barriers across a larger area.

What does it do, then? It reduces or eliminates barriers on a staggering array of Canadian exports to several countries, most notably Japan. This applies to everything from machines to canola, beef and pork, minerals, forestry products and seafood. It allows up to 3.25 per cent more foreign dairy into Canada. It allows more foreign car parts into North America without tariffs. It also creates new rules for the digital economy, such as restricting governments' right to shut off data flows.

Why does it matter? This brings the economies of a fast-developing region into the American sphere of influence. It sets new trade standards in China's backyard. It sets precedents for future agreements, including any involving China and its state-owned-enterprises. It increases trade and establishes unique rules for the 21st-century, cloud-computing digital economy.

So what's the problem? It also exposes middle-class workers to additional low-cost competition from foreign labour, notably in the auto sector. It would also cut into the profits on dairy farms, although the government promises a multibillion-dollar 10-year program to protect current farm revenues. Government decisions could be overturned in special tribunals, as they are in NAFTA, when companies sue over democratically adopted laws.

Is it a done deal? No. It still needs to be ratified in national parliaments, including Canada's, once the federal election is over. A vote is expected early next year in the U.S. Congress, and it could prove difficult.

So can we see the full text? No, not yet. It's undergoing a legal review. The details that have been released are coming from the various governments. One Canadian official expressed hope the parties would manage to release the agreement within a few days. But it's unclear whether Canadians will get to see it before they vote on Oct. 19.

Does this end NAFTA? No. The North American Free Trade Agreement still exists, but in areas where the two agreements conflict the newer one will usually prevail. In a way, this is what Barack Obama promised when he first ran for president and said he'd revisit NAFTA — which prompted a controversy back in 2008. He promised new labour and environmental provisions, and this agreement has chapters on both those things.

Does this end Canada Post and the CBC? No. There's a popular online theory to that effect, based on the provisions limiting the rights of state-owned-enterprises. But the government insists the relevant chapter excludes public services, and specifically says the CBC and Canada Post won't be touched.