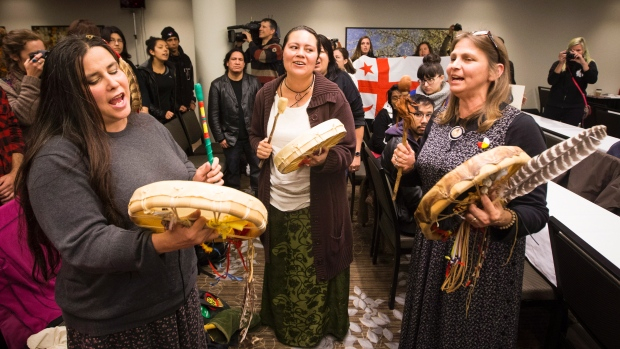 Indigenous women have a message for Prime Minister Stephen Harper.

Under his watch, nearly 300 of their own have been found missing, murdered or dead under suspicious circumstances, but a national inquiry “isn’t really high” on the PM's radar. Their children make up nearly half of the country’s foster care population, and one in four Indigenous children currently lives in poverty.

Under his watch, more than 90 First Nations communities lack access to safe drinking water, and over $60 million has been slashed from Indigenous organizational budgets.

Yet today, days before the federal election, Indigenous women say they would like to thank him.

“All of the bad stuff he has been doing has translated into this beautiful response from Indigenous people that ends up being led by Indigenous women,” said Tanya Kappo, an Edmonton lawyer from the Sturgeon Lake Cree Nation and First Nations activist.

“I would thank him because he forced us as Indigenous women to take our place instead of waiting for the place to be made for us.”

Since 2006, Harper has issued a national apology for Indian Residential Schools — but has also denied Canada’s history of colonization. His Conservative government also trashed the Kelowna Accord and passed sweeping omnibus bills that compromised Canada’s natural resources, and the ability of Indigenous people to protect them.

This steady stream of insults, along with disregard for nearly 1,200 missing and murdered Indigenous women (MMIW), has spawned an unprecedented level of First Nations activism that has captured national and international attention, she suggested.

A cause to unite the country

The last several years under the Harper government have, in fact, profoundly changed the non-Indigenous perspective of issues like First Nations land rights and environmental conservation, Kappo said.

“This has had a really big impact on how the relationship has changed with non-Indigenous Canadians," said Kappo. "Suddenly, they’re seeing us differently than the sort of angry Indian that’s been portrayed for generations."

First Nations relationships with the federal government may have deteriorated over the last 10 years, but in many ways, their bond with the rest of Canada has never been stronger, she explained.

Protests against Bill C-51, the Pull Together campaign against the Enbridge Northern Gateway pipeline, and the Unist’ot’en Camp in northwestern B.C. are just a few First Nations-led movements that have garnered support from thousands of Canadians country-wide.

Nova Scotia Native Women's Association president Cheryl Maloney believes First Nations communities have "a lot of power" in Canada as a result of this activism, inspired by pushback against Harper.

"When I was at some rallies, non-Aboriginal Canadians were outnumbering us," she told National Observer. "Canadians were paying attention to the omnibus legislation, and they know because of the advocacy of First Nations that the environment is at risk in this country.

“We may be living in some of the poorest places and with some of the worst statistics, but over the last four years, aboriginal and environmental issues — we've influenced the Canadian psyche on that."

Despite feeling "more racism from our prime minister" than the rest of Canadian society combined, Maloney said she would like to thank Harper not only for bringing Canadians together, but for"awakening" Indigenous youth as well.

According to the Mi'kmaq advocate, the 2012 Idle No More movement gave birth to a more informed generation of young people who understand everything from omnibus bills to treaty laws and the legislative process in Canada.

"Our youth were at every round dance, every protest," she explained. "Our ceremonies came back through the kids, who did everything in ceremony whether they were taught it or not. It’s so powerful.”

Métis and Cold Lake First Nation artist Dawn Marie Marchand has reclaimed her own Indigenous identity over the last decade, and now uses art and culture to engage First Nations youth in Alberta.

Before the Harper government, she said it was easier to "gloss over" the concerns of Indigenous communities, but now that these issues have been pushed into the spotlight, it won't be so easy to do so in the future.

“There have been so many opportunities to call out the systematic racism inherent in the Indian Act through social media," she said in an interview.

“If he wasn’t so blatant in his dog-whistle politics and demonizing women and Indigenous issues, many of us never would have found our voice.”

But don't be confused, she added — Indigenous women aren't happy with Stephen Harper. On the contrary, Marchand fears that if Harper is re-elected, her people will experience worse challenges under his administration.

“It’s almost like you’re in battle, but it’s not a physical battle," she told National Observer. "You know without a doubt that you are not valued in this country."

Marchand said Harper appears to have a systematic policy of marginalization that not only affects Indigenous people, but ethnic minorities at large.

"Now we’re seeing the next step, which is the demonization of Muslim people," she explained. "[The Conservative government] is not above any form of divide and conquer. Their priority is to access land and resources by any means necessary."

Kappo whole-heartedly agreed, and said dismissal of MMIW is only the tip of the iceberg when it comes to systematic marginalization under the Harper government.

With the Tories at the helm, she believes First Nations "consultation" has frequently been little more than tokenism.

So what's the message from these Indigenous women?

Thank you, Stephen Harper — and don't come back

Kappo, Marchand and Maloney share the view that it's time for the veteran prime minister to go.

He's already done enough damage to his own party's reputation, let alone the reputation of the federal government.

“I think Stephen Harper and the Conservatives for all Canadians have been the worst offender ignoring the foundation of Canada, which is the Constitution," said Maloney. "That’s bigger than just saying they’re ignoring aboriginal rights.”

Both the Liberals and NDP have made large election promises to Indigenous Canadians, including an end to boil-water advisories across all reserves, a national MMIW inquiry, and billions of dollars in infrastructure, health, and education investments.

Repair work will have to start right away if the government aspires to have a real relationship with First Nations communities, said Marchand, and those initiatives must involve Indigenous scholars, philosophers, and law-makers.

"If you look within the Harper Conservatives, that has changed forever the political landscape for Canadians," she explained. "It has infiltrated every board, every area of federal reach within the country. I don't think anything is going to turn on a dime."

The Conservative Party National Campaign did not answer multiple calls for comment on this story.

Indigenous voters could snatch victory from Conservatives in Kenora