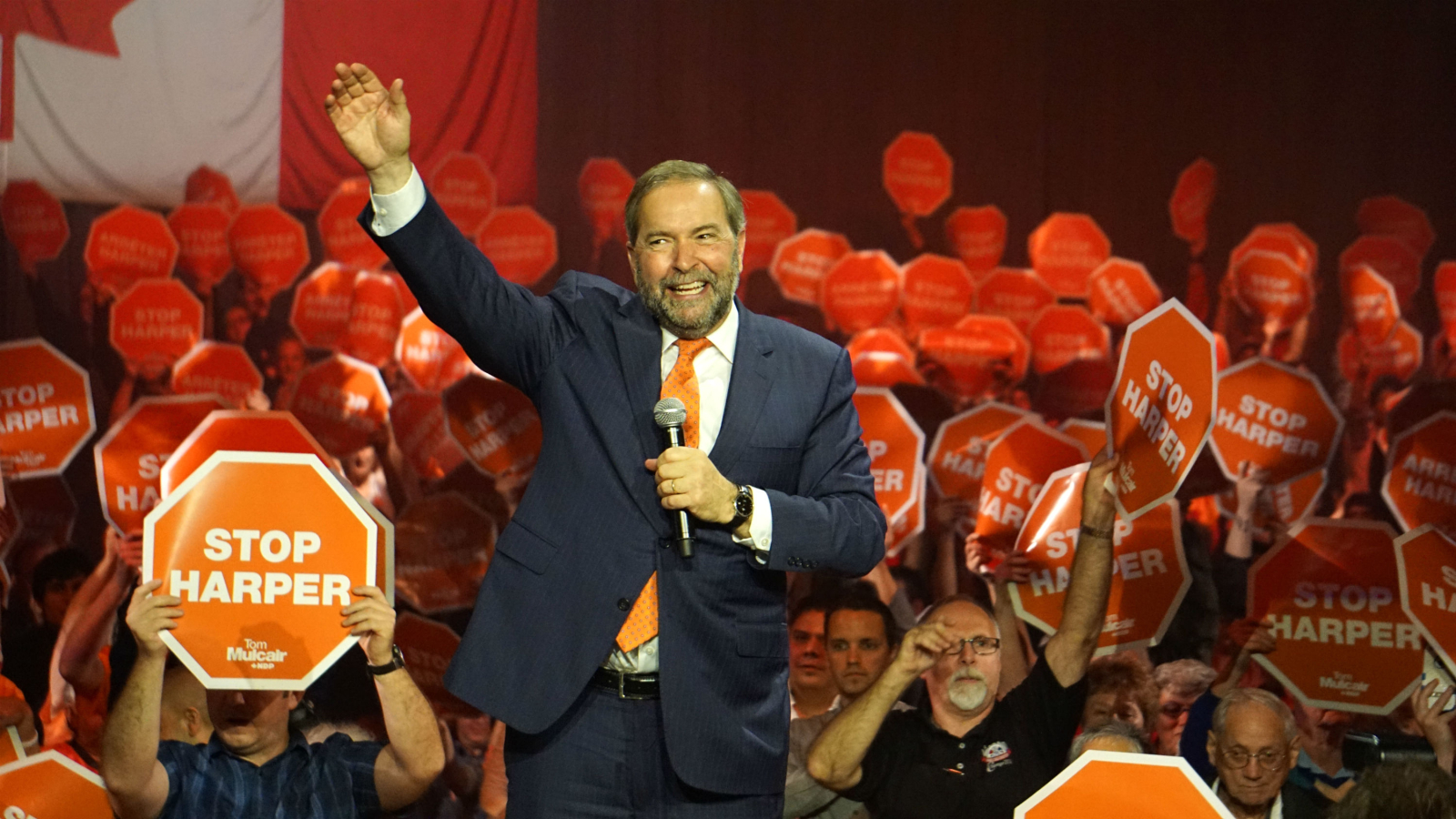 Tom Mulcair invoked Jack Layton's name several times as he ended the NDP's campaign with two rallies Sunday, an attempt to pay homage to the former leader's memory as much as it was to conjure up his spirit for party faithful in the final push to the polls on Monday.

Reminders of the man who delivered New Democrats to the doorstep of power in 2011 were sprinkled everywhere at the waterfront convention centre in Toronto where Mulcair made his final pitch to skeptical Ontario voters.

Layton's widow, Olivia Chow, who is running in Spadina-Fort York, was in the front row of Toronto area candidates. A man wearing a T-shirt inscribed with the words "I am Jack's Legacy" wandered the cavernous hallways.

Later, at home in Montreal, Mulcair's references to Layton, who died within months of the party's historic 2011 rise to Official Opposition status after a battle with cancer, drew sustained, heartfelt cheers.

It's not that Layton's name has been absent from Mulcair's campaign. His stump speech usually ends with a reference to the former leader and acknowledges how the former Toronto city councillor helped create the party's power in Quebec.

One of the challenges for Mulcair as Canadians trudge to the ballot box is to prove that 2011 was not a fluke and that voters finally warmed to the NDP, not just Layton.

Sean Caragata, who is working on the campaign of Toronto NDP candidate Andrew Thomson, a former Saskatchewan finance minister, says "regardless of the ultimate outcome in terms of total seat count," he believes Mulcair will succeed in holding the party's Quebec base and broadening its appeal to places like Alberta.

But do New Democrats wonder what it would have been like had Layton not died of cancer?

The polls in the final leg of the 2015 campaign have not been kind to Mulcair's NDP.

After riding a wave of enthusiasm following the election of the first-ever New Democratic government in Alberta and outrage over the Harper government's C-51 anti-terror bill to the top of the public opinion, Mulcair has watched the party's fortunes plunge to the point where they could end up back at third party status.

Party insiders insist their ground strength is not reflected in the national polls and point to the fact they won or placed second in 224 ridings in 2011.

The NDP campaign battened down the hatches Sunday as it swung through Toronto and Montreal, where Mulcair — unlike the perceived front-runner Justin Trudeau — took no questions from the media travelling with him. He did do an interview with the Toronto station CP24, something his handlers did not disclose ahead of time.

"We're going to get it done," he said at the first rally of the day in the hotly contested riding of University-Rosedale, where New Democrat Jennifer Hollett is locked in a tough fight with Liberal incumbent Chrystia Freeland.

Throughout the campaign, Mulcair has said his principal opponent is Stephen Harper and that his job is to defeat him and replace his Conservative government.

But on the eve of the election, he directed most of his stump speech attacks Sunday at Justin Trudeau's Liberals, who polls have suggested are out in front.

Mulcair renewed his attack over the resignation of Liberal campaign co-chair Dan Gagnier, who was forced to resign after The Canadian Press revealed an email earlier this week that he was providing strategic advice to TransCanada Pipeline about how to get the Energy East project through should there be a change of government.

He pointed to the Liberals' unfulfilled promise of a national childcare program from previous campaign and said Trudeau has clearly given up on it.

The NDP could hold the balance of power in a hung Parliament — or end up as a junior partner in some form of informal coalition — scenarios that Mulcair has refused to discuss.

"To each and every Ontarian," Mulcair said in font of about 1,000 supporters. "On Monday you will have a crucial role in deciding the outcome of this election. Whether it's in Brampton or Scarborough or Niagara, in Waterloo, or London, in Essex, Oshawa, or Kenora, Ontarians know it is New Democrats who defeat Conservatives."

That may not be entirely true in light of polls that suggest the party is running third in the province. Caragata said in downtown Toronto the battle appears to be between Liberals and New Democrats.

The sense of anticipation is heavy and Hollett urged her supporters to keep knocking on doors.

"There's no sleep tonight," she said.