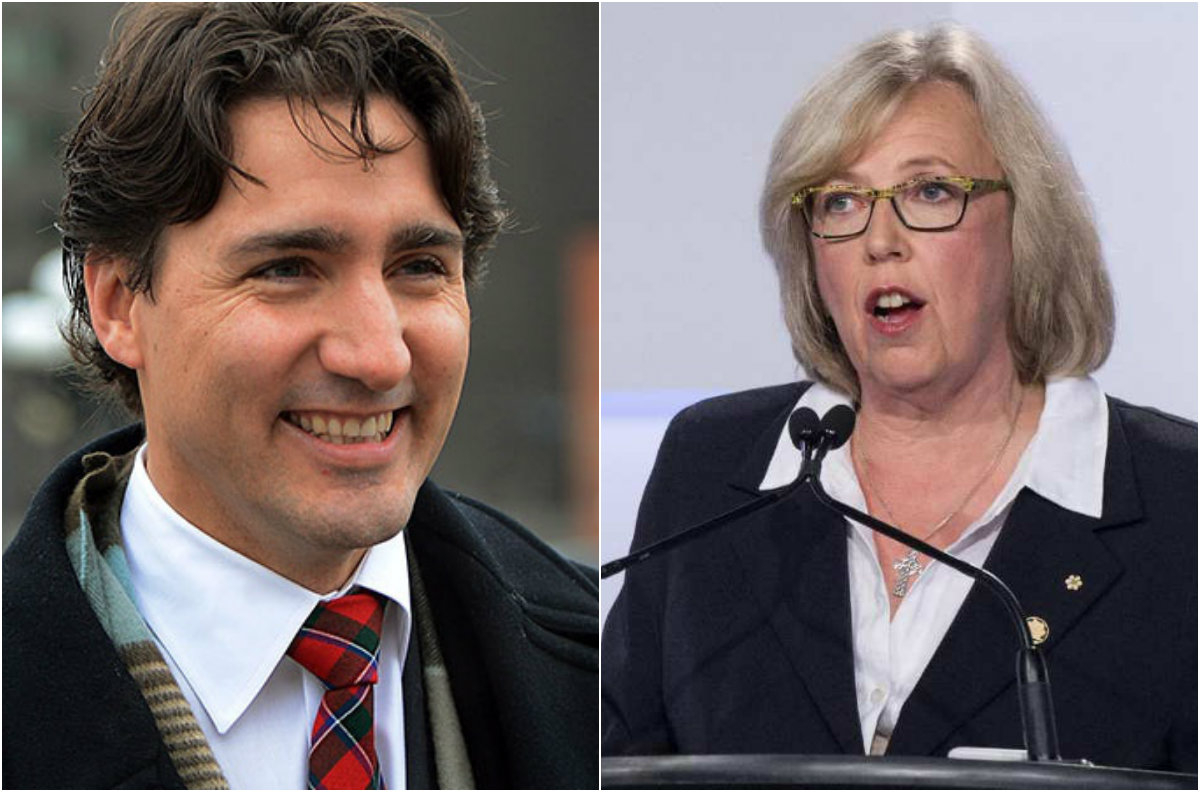 May said that, unlike Harper, Trudeau was someone with a “personal understanding of climate science” that could result in Canada playing a more constructive role at the Conference of Parties (COP) 21 talks starting Nov. 30.

“So far, Justin Trudeau is saying the right things, and his willingness to meet with me to discuss COP-21 was very much appreciated,” said May, noting that the incoming prime minister met with her just four days after he won the election.

While Trudeau’s decision to invite both federal opposition leaders and provincial premiers to join his COP-21 delegation seems revolutionary today, May said it used to be standard practice for all prime ministers before Harper— but that few took notice when the Tory leader began shutting his opponents out of international summits.

“After nine years of Stephen Harper, it looks totally amazing,” said May. “I have not expected anything less from any change in government, because it’s totally outrageous that opposition parties have been excluded from delegations under Stephen Harper.”

May herself managed to work around Harper’s tactics at past climate conferences by joining other countries’ delegations, tagging along with Papua New Guinea at Durban in 2011 and joining Afghanistan’s team two years later in Warsaw.

Being at previous COP talks as a delegate allowed May to gain access to negotiations that she would not have had as a mere observer, allowing her to better network with members of foreign green parties, including government ministers.

May’s full delegate status also let her move freely between up to six meeting rooms hosting talks, giving her a broader idea of what to expect should she ever be part of a future Canadian negotiating team.

Now that May can finally represent her own country at Paris, she must tread a fine line between legitimate criticism and openly attacking her government’s proposals, while not revealing too many details to others.

“You cannot reveal any secrets from within your delegation – that’s totally unacceptable,” said May.

The new Liberal government’s emissions reduction target will not be ready in time for Paris. While Trudeau may yet prove to be Canada’s green Gorbachev, the PM-designate faces an “awful timeline” in May’s words, one that he cannot control.

Trudeau cannot even begin any prime ministerial duties until his inauguration on Nov. 4, and until, then the Canadian government remains in ‘caretaker’ mode, as it has been since the Oct. 19 election.

That leaves Trudeau mere days to pick his new cabinet, delegate various responsibilities, prepare for the Throne Speech, then jet off abroad to the G20 Summit in Turkey on Nov. 15-16, a leader’s summit for the Pacific Rim nations in the Philippines on Nov. 18-19, the Commonwealth Heads of Government Summit in Malta on Nov. 27-29, and finally COP-21 on Nov. 30 – Dec. 11 in Paris.

To top it all, the new PM must also find time to meet with provincial premiers ahead of the Paris talks and hash out a national plan for slashing carbon emissions before COP-21 gets underway.

“There’s a lot that needs to be done before we get to Paris,” said May.

The Liberal environmental platform calls for working with the provinces to establish a framework for reducing Canada’s carbon footprint within 90 days of taking office, meaning that a climate action plan likely won’t be ready until early 2016, well after the Paris talks conclude.

However, the Liberals have also promised to phase out federal subsidies for oil sands industries and invest in renewable energy sources, roll out tax incentives to promote technological innovation and job creation, and increase the amount of protected marine and coastal areas to five per cent by 2017 and 10 per cent by 2020.

“I think it will take a while to repair the damage of 10 years of Stephen Harper,” said May.

Don’t COP out yet

On Sept. 27 Brazil’s president Dilma Rousseff pledged to slash emissions by 37 per cent below 2005 levels by 2025, rising to 42 per cent by 2030, coupled with a goal of sourcing 45 per cent of energy from renewables.

While momentous, there are still widespread concerns that COP-21 may not be enough to keep global warming within 2 degrees Celsius, as evidenced by the last round of preparatory talks in Bonn on Oct. 19 – 23.

“The current state of the draft agreement reflects how close countries are to reaching consensus on key topics. For example, progress was made on mitigation and transparency where negotiators are now debating the details, while on adaptation and finance there remain more fundamental differences,” said Jennifer Morgan, global director of the World Resources Institute’s climate program, in an Oct. 23 statement.

Adaptation to climate change and financing decarbonisation efforts remain sticking points as poorer nations are pressing their richer counterparts to do more, according to May.

“We can’t risk another Copenhagen,” said May, referencing the 2009 summit’s failure to establish a strong working agreement to tackle climate change.

In her view, a truly effective global climate deal must include penalties for any nation violating the rules, such as trade sanctions.

May said the 1987 Montreal Protocol on Substances that Deplete the Ozone Layer was effective as it had the teeth to penalize violators, resulting in drastic CFC gas emission cuts.

She contrasted that agreement to the 1998 Kyoto Protocol, which did not include any penalties for high-polluting nations and eventually fell apart after the U.S. under President George W. Bush refused to ratify it, followed by Canada’s total withdrawal from the treaty in 2011 with no adverse consequences for Stephen Harper’s government.

“If we could have an enforcement mechanism that would be helpful, to see this treaty actually work,” said May.