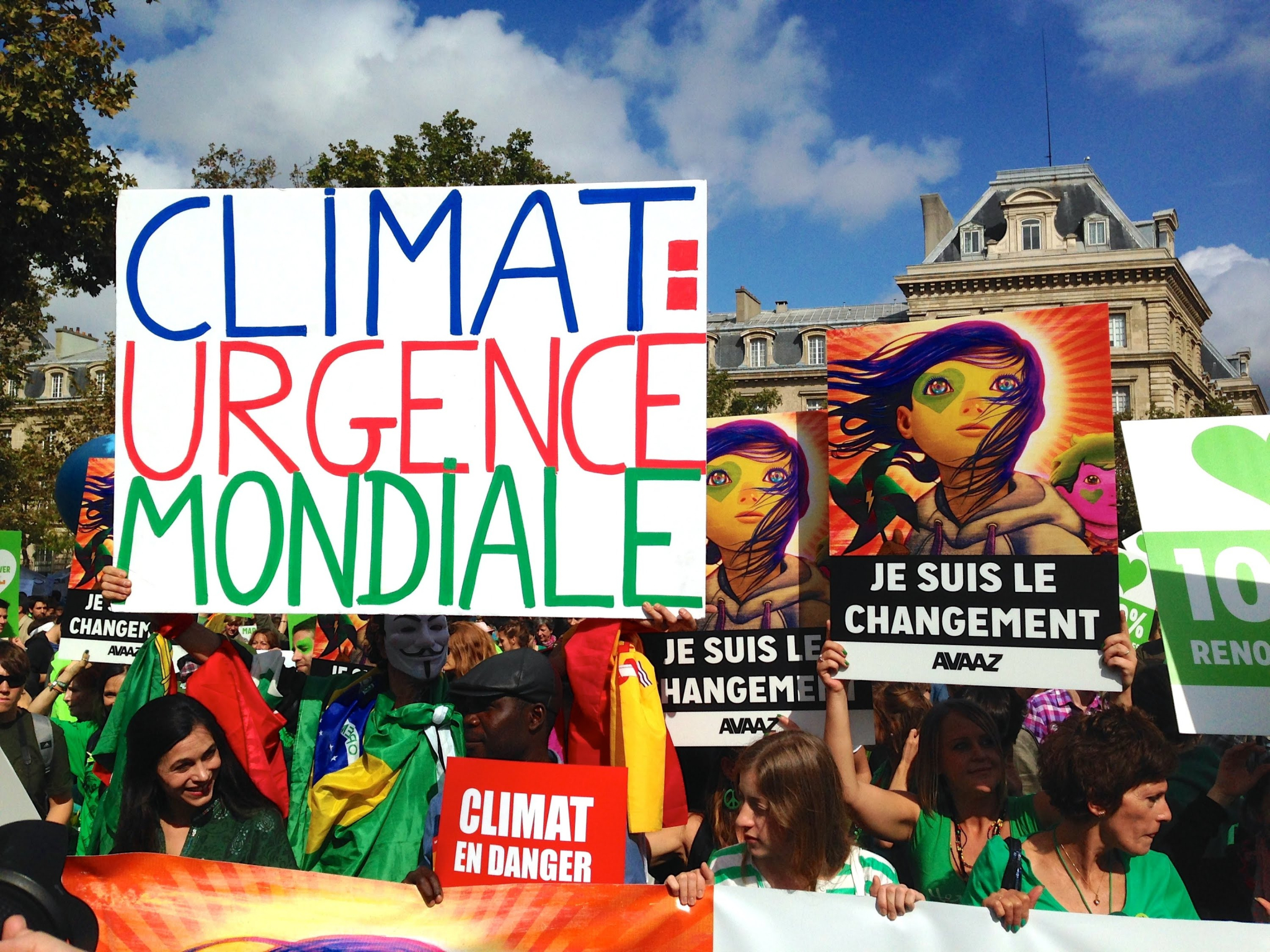 UPDATE November 18: The French government has announced that it will prohibit demonstrations including the Global Climate March planned in Paris for November 29, and further actions related to the COP21 climate talks. 350.org campaigner Nicolas Haeringer said in response, "The government can prohibit these demonstration, but it can not stop the mobilization, and it won't prevent us from strengthening the climate movement...we will still find a way for people in Paris to make the call for climate justice to be heard."


With the highly-anticipated Global Climate March on the verge of cancellation following the weekend’s terrorist attacks in Paris, climate change activists are scrambling to make alternate plans ahead of the Paris climate summit, COP21.

But even amid rumours of cancellation of the march — expected to be one of the largest in the world of its kind — some remain determined to forge ahead as planned.

“The tragedy in Paris has only strengthened our resolve,” said Nicolas Haeringer, France campaigner for 350.org Monday afternoon. “This movement for climate justice has always also been movement for peace – a way for people around the world to come together, no matter their background or religion, and fight to protect our common home.”

But authorities aren't sure that can happen given the security risk.

Everything outside of the climate talks, “a whole series of concerts, of rather festive events, will be without a doubt cancelled,” French prime minister Manuel Valls said Monday to RTL radio, according to the Agence France-Presse.

Organizers of the Global Climate March on November 29th on the eve of the summit had hoped to attract as many as 200,000 participants.

Several of the main organizers of the march – including 350.org, Avaaz and Coalition Climat 21 — spent Monday sequestered in meetings, planning what course of action to take in the event of a cancelation.

The group 350.org said it will continue to discuss with French authorities how it can move forward with the march, plans for December 12 (a day on which 350.org has called for mass mobilization and civil disobedience) and other demonstrations.

“We fully share their concerns about public safety – just as we fully oppose any unnecessary crackdowns on civil liberties and minority populations,” Haeringer said.

350.org said no matter what the final plans for the Paris march, it urged other global climate marches world-wide to continue. “We can think of few better responses to violence and terror than this movement’s push for peace and hope.”

Patrick Bonin, a climate and energy campaigner with Greenpeace Canada in Montreal, noted that a lot of effort, planning and resources over a number of months have gone to prepare for the march.

The intense preparation has left some groups willing to move ahead, but others want more time to ensure they’re making the proper decision. Greenpeace is in the latter camp.

“With the discussion we had with the French government, it’s too early to decide from a Greenpeace point of view if that demonstration will go forward,” Bonin said Monday evening on the phone from Montreal.

“What happened is still quite fresh for the French people and they want to make sure the right decision is taken.”

"We believe the right decision has to be made"

The march is important for Greenpeace because it ensures the negotiators inside the conference centre know people outside are pushing for a proper climate deal,” Bonin said.

“But this said, there are security decisions. We believe the right decision has to be made.”

The Coalition Climat 21 released a statement saying that it believes COP 21 can not take place without the participation of civil society in France. “Thus, we will implement all our efforts to hold all the mobilizations currently planned.

“In consultation with the authorities, we will continue to ensure the security of all participants is guaranteed.”

The situation was much the same over at Climate Express, a group of climate activists that was hoping to send 10,000 people to Paris on bikes, or by bus or train.

"Let us answer fear with solidarity"

Sofie Defour, who works in communications with Climate Express, told National Observer that the group would meet Monday evening to discuss their options going forward.

“Our thoughts are with the victims of the attacks in Paris, their families and friends. This weekend is a time for grieving and mourning,” read a statement on the Climate Express website. “Let us answer fear with solidarity.”

The statement added that together with their international partners, Climate Express is closely monitoring the security situation in France, but for the moment the schedule for the march remains unchanged.

Diane Connors, a regional organizer with the Council of Canadians in Edmonton, is still heading to Paris with a 17-member strong youth delegation. The Global Climate March was an integral piece of their itinerary, but like many the world over, Connors is waiting to hear whether the march will go ahead.

Connors is less concerned about the chances of getting caught in a terrorist attack than she is over the increased security that the past weekend’s events will bring.

“It could mean we’re not allowed to exercise our freedom of speech and our freedom of assembly in order to speak out about things that we think are important at this venue,” she said.

Connors is also disappointed the march may not go ahead as she saw it as a symbol of solidarity and a grassroots way to build community and spirit in advance of the negotiations.

“I’m concerned that not holding that march will be crushing the spirit of hope that we had coming into this event.”

Louise Comeau, executive director of Canada’s Climate Action Network (CAN), said the terrorist attacks would not impact the delegation of 60 who are accredited to participate in the negotiations.

But Comeau said another larger group of people planning to go to Paris for the march and other events will now face a choice as to whether they go or not.

Generally, Comeau said people heading to Paris are concerned, but also determined to show the world that everyone can come together to solve climate change.

“Our intention is to go, but to be cautious and careful, and show the world that we’re committed to moving forward.”