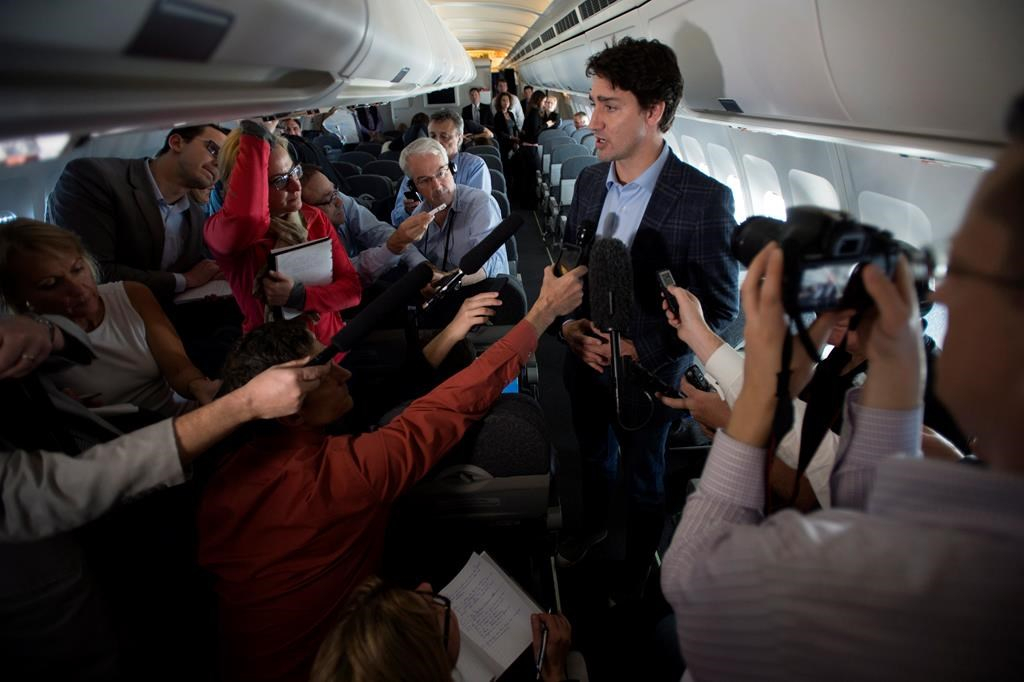 PM Justin Trudeau speaks with media on the plane to Manila (CP).
Previous story
Next story

MANILA, Philippines — Canada will increase the number of ground troops it has in Iraq to train local forces as a way of making a bigger military contribution to the coalition fighting Islamic militants, Prime Minister Justin Trudeau says.

Trudeau said the increase, from the current number of 69 special forces trainers, is one of the scenarios being worked on as the government prepares to end the air combat mission of its CF-18 fighter jets in the U.S.-led coalition that is bombing targets in Iraq and Syria.

Trudeau disclosed the plan during a wide-ranging, 20-minute news conference aboard his Canadian Forces airliner, several hours before it touched down in the Philippine capital of Manila on Tuesday night local time for the Asia Pacific Economic Co-operation summit.

Trudeau will hold a key bilateral meeting with U.S. President Barack Obama at the summit on Thursday, where he said they will discuss a range of topics, including the military mission against the Islamic State of Iraq and the Levant, the refugee crisis and their combined efforts to fight climate change.

Trudeau has remained firm that Canada will withdraw its six CF-18 jet fighters before its March 2016 commitment expires, but has faced pressure to climb down from that promise because of Friday's terrorist attacks in Paris.

"I've committed repeatedly to my allies that we were going to do more on the training front and that means obviously more than just 69 trainers," Trudeau said.

Trudeau didn't offer specific numbers but he has cited the Forces Afghanistan training mission, to which the Harper government initially committed almost 1,000 troops.

Trudeau said he wants Canada to be "a strong and positive contributor to the continuing mission against ISIL," by training northern Iraqi troops to take the ground war directly to the militants.

Trudeau's arrival at the back of his aircraft to meet with almost two dozen travelling journalists was a marked departure in prime ministerial communications after the strict message control of the recent Harper decade.

The rookie prime minister, on his first international trip, described some of his behind the scenes activities at the G20 summit he'd finished attending the previous day.

He said he was looking forward to his first formal bilateral with Obama because "we're going to have a lot to agree on" despite the president's recent rejection of the Keystone XL pipeline project from Alberta to the U.S. gulf coast.

"One of the things I pointed out in our very first conversation on the phone was his focus on getting big things done in his final year," he said. "Looking at legacy dovetails nicely with my desire to get big things done off the bat, in my first year, to set the tone for the coming years."

Their joint efforts will continue at the Paris climate change summit in two weeks, he said, where they will "push strongly on some of the more recalcitrant countries who don't seem to be as ambitious in their approaches to climate change."

"I said, 'look Canada is a country with energy resources and seasons and a climate that means that we have challenges where it would be easy for us to make excuses around not doing the kinds of things on climate change that we need to do," he said.

Asked whether he was offended by Obama's characterization that Alberta has "dirty oil," Trudeau suggested such remarks were a result of Canada's inaction on the environment.

Trudeau said Canada has more work to do, beyond making positive statements, to convince the world that the country now takes environmental issues seriously.

"I know that Canada has to start demonstrating real action and not just words in order for the world to understand that we are serious and committed to developing our resources in a responsible and sustainable way."

Trudeau didn't offer anything specific, including whether his government would raise the previous Conservative government's greenhouse gas emissions reduction target ahead of the Paris summit.

Trudeau also held firm to his commitment to bring 25,000 Syrian refugees to Canada by the end of the year, in the face of mounting criticism from the premiers of Quebec and Saskatchewan, as well as some mayors.

"It didn't take the tragedies of Paris for us to suddenly realize that security is important," said Trudeau, adding that he is "very much committed to keeping Canadians safe while we do the right thing to engage responsibly with this humanitarian crisis."

That's the same message Obama gave the G20 on Monday as it wrapped.

Trudeau called that meeting an "excellent first experience at my first summit." He said he had a wide range of discussions as he attempted to forge relationships with other world leaders. While he's trying to find common ground with other leaders, he said he realizes the need to "agree to disagree on other things."

"I'm also pleased to say I asked a fair bit of advice of leaders and they volunteered some as well," Trudeau added.

"So many of the issues Canadians are facing, around the economy, around trade, around security, around growth have implications that stretch far beyond our borders."