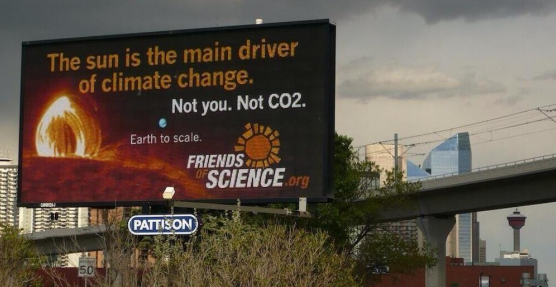 Friends of Science billboard in Calgary in 2014. Photo courtesy of Greenpeace
Previous story
Next story

Ecojustice, on behalf of a group of prominent Canadians, filed a complaint Thursday with the federal Competition Bureau, asking it to investigate false and misleading representations made by climate change denier groups.

In their application to the Commissioner of Competition, the group called for “a thorough, rigorous inquiry of the denier groups and their climate science misrepresentations.”

The group is also pressing for the commission to refer their application to the Attorney-General of Canada for criminal charges against the denier groups.

Ecojustice filed the complaint of behalf of Stephen Lewis, the former Canadian Ambassador to the UN and chair of the 1988 World Conference on the Changing Atmosphere; Tzeporah Berman, author and adjunct professor at York University; and Thomas Duck, an atmospheric scientist at Dalhousie University in Halifax.

Other complainants are David Schindler, the Killam Memorial professor of ecology at the University of Alberta; and Danny Harvey, an University of Toronto professor and Intergovernmental Panel on Climate Change lead author.

The complaint cites The Friends of Science, The International Climate Science Coalition, and the Heartland Institute for misleading billboard advertisements, website representations and a poster made available as a free download on a website.

The science is very clear

“These groups attempt to discredit the established scientific consensus that global warming and climate change are real and caused by human activity,” Duck said in a statement. “The reality, causes and consequences of climate change are well understood.”

David Schindler told National Observer that the science is very clear. “Most of what these groups are basing their propaganda on is so outdated and so anti-science that I think it’s time the public had the record cleared.”

Schindler said lots of solid oceanography, physics and atmospheric science are involved, to the point where every major academy in the word has endorsed the Intergovernmental Panel on Climate Change.

“I’m very much with the people of 350.org who say we don’t have 50 years to stop using CO2. We have to turn the CO2 in the atmosphere around in very short order or we’re going to have a very expensive planet on our hands to try to maintain any sort of reasonable human lifestyle,” Schindler said.

Michelle Stirling, communications manager for Friends of Science, issued a statement saying that they didn’t know what public benefits accrued from a charity [Ecojustice] “attempting to publicly denigrate a group of scientists and citizens who are expressing scientific information to the larger public.”

Stirling said they will wait to receive any formal notice of action from the Competition Bureau.

The Friends of Science Society says it has spent a decade reviewing a broad spectrum of literature on climate change “and have concluded that sun is the main driver of climate change, not carbon dioxide.”

Ecojustice’s application states that climate science misrepresentations generally adhere to the following notions: that the earth’s climate is not warming; humans are not causing any warming that is occurring; actions to reduce greenhouse gas emissions are not warranted; and any climate change that occurs is beneficial.

In late November, the Friends of Science issued a news release in which it said Calgary is the showcase for a “clever collection of climate change billboards” which help taxpayers understand the uncertainties surrounding climate science.

“Friends of Science Society hopes an informed public will keep policy makers from making an ill-fated rush-to-renewables in Alberta and prevent Canada from signing on to economically destructive climate targets in Paris.”

Canada’s Competition Act prohibits the making of materially false or misleading representations for the purpose of promoting any business interest such as fossil fuel development.

In its application, Ecojustice states that it believes the case should be referred to the Attorney General as a criminal matter. Potential prosecution can take place if it can be demonstrated that there’s clear and compelling evidence that accused knowingly or recklessly made false or misleading representations to the public.

The competition bureau must also be satisfied that criminal prosecution would be in the public interest.

The application alleges that the Friends of Science’s continued display of climate science misrepresentations after numerous consumer complaints and a former censure by the ASC is clear and compelling evidence that the group knowingly or recklessly made such misrepresentations.

“When combined with the overwhelming public importance of the context in which the climate science misrepresentations are made – including the effect of climate change on the Canadian economy, and the negative effects of climate science misrepresentations on competition in key markets for stimulating the transition to a low carbon economy in Canada – we believe the Commissioner’s inquiry should proceed on the criminal track,” the application states.

Ecojustice and the individuals it represents allege that the climate change denier groups misrepresent climate change science to promote their own business interests and those of their anonymous funders.

“While the denier groups do not publically disclose the identities of their funds, available public information suggests their funding comes at least in part from individuals and corporations with business interests in the production and use of fossil fuels,” the application to the Competition Bureau alleges.

The application states that Talisman Energy Inc., a Calgary-based oil and gas exploration and production company, donated $175,000 to Friends of Science in 2004 to fund the production of a specific video and other activities.

Mike De Souza, an environmental journalist then with the Ottawa Citizen, wrote in 2012 that Talisman Energy contributed to a pair of trust accounts at the University of Calgary in 2004. The money was intended to produce a video and engage in public relations, advertising and lobbying activities against the Kyoto Protocol and government measures to restrict fossil fuel consumption and greenhouse gas emissions.

The accounts were formed at the request of Friends of Science, whom de Souza described as “retired oil industry workers and academics who oppose the Kyoto Protocol and reject the validity of peer-reviewed science on the causes of climate change observed in recent decades.”

In an earlier submission to Alberta’s Privacy and Information Commissioner, Talisman said that a university audit turned up nothing to suggest that the school was aware of its own funds “being used for political purposes,” De Souza reported.

A Talisman spokesperson told De Souza that “the donation was a decision made by the company’s former president, who had ‘different views on climate change science.’

“Today, Talisman’s position is quite different and Talisman does believe that [greenhouse gas emissions] pose a significant risk to the industry,” the spokesperson said.

In its application, Ecojustice states that climate science misrepresentations are inherently harmful to the proper functioning of markets in Canada.

The Competition Act gives the commissioner investigatory powers to examine witnesses and order the production of documents—such as lists of donors— to advance an inquiry. If the information gathered by the commissioner shows the act has been violated, the matter may be referred to the Attorney General of Canada for prosecution or civil proceedings before the courts.