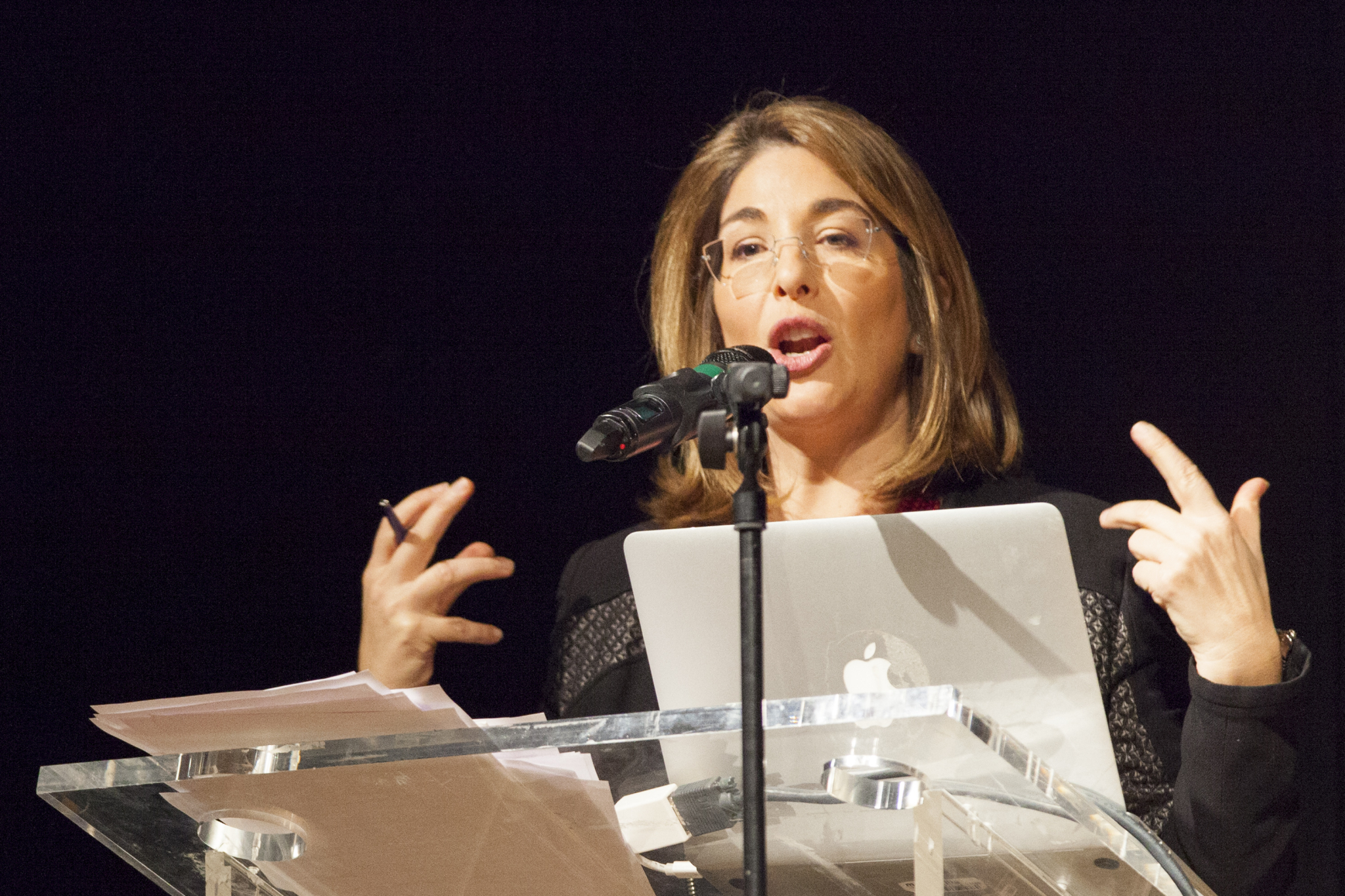 In sharp contrast to the hopefulness that some environmentalists are expressing at the COP21 climate summit, iconic Canadian activist and author Naomi Klein delivered a stinging rebuke against it—stating her doubts that the global talks will deliver the kind of radical, transformative change needed to prevent catastrophic climate change.

"I refuse to leave our future in the hands of the world leaders cloistered in Le Bourget,” she said in downtown Paris, well removed from the summit site northeast of the city.

"We have left our messianic fantasies at home. We've done the math. We know politicians have come to the table with emissions reduction targets that will lead us to an extremely dangerous future, three to four degrees.”

"This is not ambition."

Klein was speaking at a free public event downtown that drew about 500 people away from the summit. The author is promoting her new movement, the "Leap Manifesto" —an attempt to bind together social activist, labour, environmental and indigenous groups to push for greater climate ambition from governments.

And while environmental observers from Greenpeace to Équiterre have said they're surprisingly pleased with Trudeau and his climate negotiators so far — Klein says current country emissions targets at COP21 are "completely unacceptable."

She's not alone. Few here at the summit, including scientists and the UNFCC, believe the climate targets proposed by nations will be enough to keep global warming below two degrees —the summit's official goal. The hope is, the final agreement will include a mechanism for "ratcheting up" stricter climate targets in five years time.

"If this was 1992, and we were in Rio, maybe we could mess around with this kind of incremental nonsense. But it is 2015... and we are up against the wall. We cannot kick this can down the road anymore —there is no more road.”

The global two degrees target is itself a step back. At past COP meetings, Klein says, island nations said they needed "1.5 to survive” and African delegates said even two degrees warming "was a death sentence for Africa.”

“[So] by the end of the summit, there won’t be anything that deserves to be described as success. But we cannot afford to give into despair —we need a post-Paris peoples’ plan.”

Enter the Leap Manifesto, she says.

Klein’s been travelling the planet for five months to promote the manifesto from Australia to Europe. It’s a philosophical call for action by her “political pop up” organization called This Changes Everything, which is also a book and film.

The manifesto calls for people to support a fully sustainable energy economy in 20 years, in a way that respects Indigenous rights, and against powerful interests that would resist decarbonization.

"We know we are up against forces which have a huge amount to gain from inaction. When you look at the sponsors of the [COP21] summit, the fossil fuel companies, there’s trillions of dollars to lose if we have a response to climate change that acknowledges we have to leave the vast majority of reserves in the ground,” said Klein.

The manifesto is called "Leap" because of its call to jump towards greater climate ambition, but also because 2016 is a leap year. The hope is that people will rally internationally for the movement on Feb. 29.

The Leap Manifesto was launched in September during the Toronto International Film Festival and at the height of the Canadian federal election with the backing of environmental, labour and social activist groups. Some 100 famous Canadians also signed on, including Donald Sutherland, Ellen Page, Neil Young, Rachel McAdams, Leonard Cohen and Pamela Anderson.

But the day after the launch, mainstream media “threw an epic tantrum,” said Bianca Mugyeny, Canadian outreach coordinator for This Changes Everything.

National Post founder Conrad Black called the Leap Manifesto “national suicide,” while others called it “green communism,” a sabotage of the NDP, and an attempt to throw Canada back to the stone ages, said Mugyeny.

The Globe and Mail simply called it madness —which was a strange reaction, she said, to a document (the Leap Manifesto) "whose byline is a call for Canada based on caring for the earth and each other,” she added, with laughs from the Paris crowd."But the backlash wasn’t all bad. We gained a lot of attention."

Now, other leap-inspired manifestos are popping up, from Australia, Europe, the Canadian Arctic and Maritimes regions.

The President of the Canadian Labour Congress Hassan Yussuff signed on too, but it was not unanimous among the unions he leads. Many rank and file members work in the oil sands that CLC represents. But Yussuf says, if we are listening to the science, and we have to get Canada off fossil fuels, then "workers have to be part of that discussion.”

"We need to something dramatic…. because the path we’re on, if we don’t change it soon, we’re going to end up somewhere very horrible."

That’s why he’s part of a “one million climate job” campaign calling for Canada to expand public transit, retrofit nearly all houses and buildings, and build high-speed rail networks to get Canadians from coast to coast. The fast train technology, he says, has been around since “Dr. Zhivago’s time” in the 1950s.

“It’s interesting to come to Europe to experience the technology that [Montreal-based] Bombardier sells and develops, but yet we can't put it to use in our own country."

'The fish are sick with tumours and cancer'

Beaver Lake First Nations Cree woman Crystal Lameman was one of the panelists. She is also a signatory to the Leap Manifesto, and told the Paris crowd how the oil extraction industry hurt the health of her community in northern Alberta.

“It’s not charity. It has violated our treaties, attacked our basic human rights, it’s made our children sick. It’s killed those beings that cannot speak for themselves: the winged, the water and the land beings. The fish are sick with tumours and cancer… and the moose have puss bubbles under their skin. That’s not natural.”

“People everywhere are getting up… and we’re saying we’ve had enough,” she said.

Progressive intellectual Maude Barlow with the Council of Canadians added that any Paris climate agreement that Canada signs on to could be undone by trade deals such as the Trans-Pacific Partnership.

“If Canada were to take a real and serious position [on climate change], we would come back and be hit by investor state challenge from all of the American corporations under NAFTA, and all of the Chinese oil and energy corporations operating [in the] tar sands under a similar investor agreement [with China.]"

She said the real battle on climate change is a fight against economic globalization based on unlimited growth. That philosophy ensures that "there’s absolutely no forest not to be taken down, no dam not to be built,” warned Barlow.