Time for the Big Five to look alive: Canada’s largest banks should act on climate change 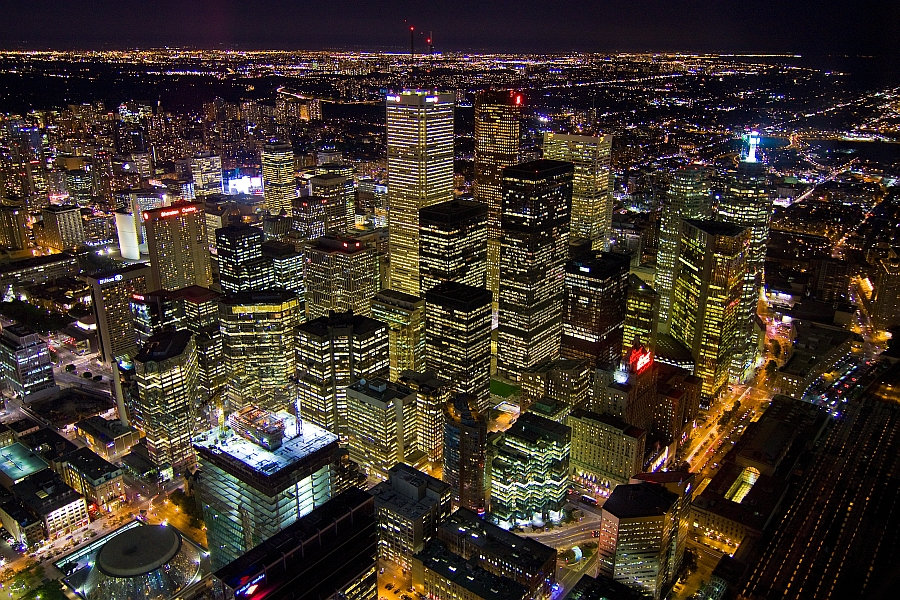 The Toronto Financial District viewed at night from the CN Tower, home to all of Canada's 'Big Five' banks. (Photo: Wikimedia Commons).
Previous story
Next story

Speaking to a high-level audience in Paris on Monday, François Villeroy de Galhau, the Governor of Banque de France, France’s central bank, made it clear that “understanding and analysing risks related to climate change is essential” for the financial sector. He went on to emphasize the need for financial markets to be aligned with international emissions reduction targets.

As European central bankers and the global investment community prepare for an international climate agreement in Paris, Canada’s largest banks remain stunningly silent on the issue of how they are assessing the investment implications of climate change. Our country’s five largest banks – Royal Bank of Canada (RBC), the Bank of Montreal (BMO), Scotiabank, the Toronto-Dominion Bank (TD), and the Canadian Imperial Bank of Commerce (CIBC) – manage most Canadians’ money and are heavily invested in industries that will have to adapt in the transition to lower carbon energy systems.

The 'Big Five' banks and their asset management arms have large stakes in energy companies, transportation, and other business sectors that stand to be impacted by tightening emissions regulations and carbon pricing regimes. While global financial leaders are now engaged in discussions on how climate policy will create new investment risks and opportunities, the Big Five appear wedded to high-risk strategies that do not acknowledge the investment implications of international climate policy and changes to national and regional energy systems.

A recent report by the University of Cambridge indicates that global investment portfolios could lose up to 45 per cent of their value, as markets respond to climate policy decisions, technology uptake, and extreme weather impacts. In response to these risks, a number of global banks are scaling back their exposure to assets that could suffer in the low carbon energy transition. In the US, both Wells Fargo and Morgan Stanley, the fourth and sixth-biggest US bank by assets respectively, are scaling back their lending to coal-mining companies. Morgan Stanley announced they will shift their “lending and capital-raising efforts toward cleaner and renewable sources of energy and reduce the proportion of our energy financing to coal mining and coal-fired power generation.” Where are similar statements (and action) on responsible risk management by Canadian banks?

The responsibility of our national banks is not just to write healthy pay checks for their managers. The banks’ boards of directors must also consider stability and long-term value creation for shareholders, even if it means asking tough questions about their investments in North America’s major coal players such as Peabody Energy and Teck Resources. Bank directors should be responding to their international peers, including regulators at the Bank of England and the credit ratings agencies, and carrying out rigorous portfolio analyses that consider how sustained low coal and oil prices and tighter emissions regulations will impact their bottom lines. Those Canadian banks who choose to continue with a business as usual approach to managing their oil and coal-heavy investment portfolios could be in for an unpleasant financial surprise.

It is time for the Big Five to move beyond public relations platitudes on the environment and climate risk. They must align their investment portfolios and debt financing policies with internationally agreed upon climate targets to limit the world to two degrees of warming. The Big Five could carry out internal stress-testing against 2 degree scenarios and indicate to shareholders how they plan to produce a “2 degree transition plan” that will ensure a healthy business even in an emissions-constrained world.

Willful blindness by bank directors could lead to shareholder claims

According to Ed Waitzer, a Senior Partner at Stikeman Elliot in Toronto, “new regulation and expectations will touch the financial services and other sectors, as well as... investors in carbon-intensive industries.” Are Canadian bank directors listening? For those who are not, Ben Caldecott, Programme Director at University of Oxford's Smith School of Enterprise and the Environment, is clear: “company directors could be at risk of litigation if they mislead investors and the public about climate change.” This could include the directors of Canada’s largest banks.