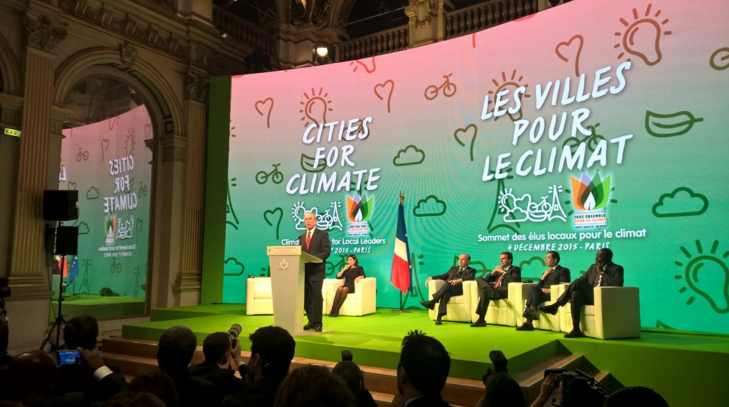 Close to 1,000 mayors from five continents gathered at the Paris City Hall Friday to sign a historic agreement on climate change measures.

The mayors, including the City of Vancouver’s Gregor Robertson, pledged to support such long-term climate goals as a transition to 100 per cent renewable energy in their communities or an 80 per cent reduction in greenhouse gases by 2050. On Thursday, the City of Vancouver was honoured in Paris by the C40 Cities Climate Leadership Group for the Greenest City Action Plan.

“We recognize that human-caused climate change already harms millions of citizens and its impact will last for decades,” read the declaration the mayors signed.

“Continuing on the same high greenhouse gas emissions trajectory will result in disaster for our children, the environment and global biodiversity. Climate change action is the only path forward.”

Among the pledges the mayors made are to advance and exceed the expected goals of the 2015 Paris Agreement; and to produce and put in place resilience strategies and action plans to adapt to the rising incidence of climate-related hazards by 2020.

The mayors also promised to deliver up to a 3.7 gigatons reduction of urban greenhouse gas emission reductions annually by 2030.

Leonardo DiCaprio implored other mayors to join in emissions reductions

The gathering took place at the Bloomberg Philanthropies-sponsored event, Cities for Climate.

Jessy Tolkan, director of the digital climate change campaign group Here Now, told National Observer that in her opinion the local leaders’ summit may have been one of the most significant days of the two weeks in Paris.

Speaking from Paris, Tolkan said, “While it’s critically important the COP21 deliver a strong binding agreement for the nations of the world, the reality is the nearly 1,000 mayors in attendance at today’s event can contribute to more than 50 per cent of the solution we facing from climate change.”

Actor and environmental activist Leonardo DiCaprio addressed the mayors, telling them: “Model cities like Vancouver, Sydney, Stockholm and Las Vegas have already committed to using 100 per cent renewable energy in the coming decades.

“So to all the mayors and governors in this room today, I implore you to join with your peers to commit to moving to no less than 100 per cent renewable energy as soon as possible. Do not wait another day.”

While the declaration was short on details as to how the cities would accomplish their goals, it did set out that the jurisdictions would need increased access to climate finance, budget authority and stronger legislative capacity.

The declaration called on every level of government to make its maximum potential contribution toward climate change progress.

“The mayors today set out the bold ambition,” Tolkan said. “If the negotiators from all the nations around the world are able to take the lead from mayors like Canadian Mayor Gregor Robertson from Vancouver, and the Mayors of Sydney and Copenhagen, then we’re headed to really making some history and combating this biggest challenge that’s ever faced humanity.”

It’s unclear how many other Canadian cities signed the declaration.

This year more than 200 applicants from 94 cities globally competed for the award. Vancouver was among the 33 finalists.