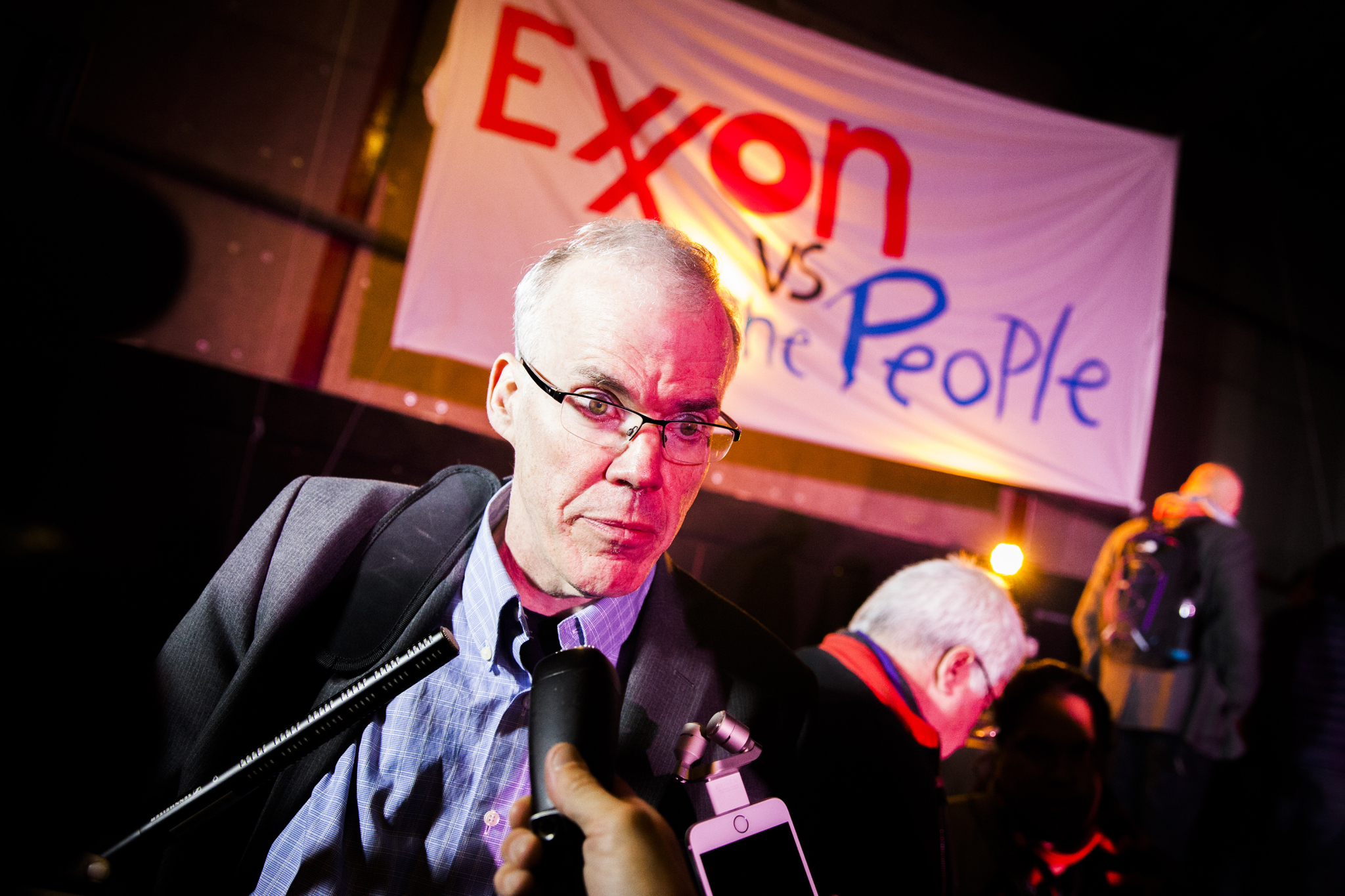 McKibben, fresh off a 350.org-led campaign that killed Keystone XL, told National Observer in Paris that the company's recent legal troubles have become the “central environmental campaign of our time—an attempt to make Exxon accountable, and by extension to make it clear that the fossil fuel industry stands in the way of real progress."

His and Klein's kitschy court room drama, which had no representation from ExxonMobil, brought in witness after witness from around the planet, who are in Paris for the global COP21 UN summit on climate change. Each presenter gave scorching testimony about the company’s harm to the climate, people and the environment.

“If you drive [into the Niger Delta], the pastime now is burials," said Nigerian activist Ken Henshaw.

Henshaw described how ExxonMobil's West African gas operations allow enormous amounts of gas flaring. Benzene has been found in the water supply 900 times higher than it should be, he said. "People still drink that water now.”

"What you see everywhere are posters announcing this burial, or that burial," Henshaw said. "Life expectancy is between 43 and 46, I’m afraid. I’m really getting scared.”

The next witness was Bryan Parras with Texas Environmental Justice Advocacy Services. He said studies have shown people living near Exxon’s Gulf refinery operations at Baytown have unusually high incidents of health problems.

"We’ve seen higher rates of leukemia in children," he said. "There’s a 56 per cent increased rate if you live within two miles of the Houston ship channel.”

Latino, African-American, and Indigenous people are disproportionately affected, he added.

The east side of Houston is also one of most toxic places in the region and country because of the large amount of refineries and chemical plants, Parras added. “It’s also one of the areas that has the most pipeline leaks.”

"We've really had to push the city and our medical establishment, which is world-renowned. Really famous cancer treatment centre in Houston. It’s no coincidence that it’s there.”

Naomi Klein asked what year he was born.

“Did it surprise you to learn that Exxon has been researching climate change for your entire life?” asked Klein.

“It didn’t,” replied Parras. “I honestly don’t trust anything these companies say. It made me upset. It made me think, what else do they know but are not saying?”

The next witness was Cherri Foytlin from Rayne, Louisiana, who works for BridgetheGulfProject.org. The Gulf Coast social and environmental activist says Exxon and other oil companies have built a pipeline grid —like a “fly swatter” —across Louisiana’s marshes and wetlands with devastating impact.

"So we're losing about a football field every hour in south Louisiana, and we've lost one million football fields to this day," Foytlin said. "I'm busy putting sand bags up to keep the water out of my community."

“Those wetlands are our protection —they are a buffer zone for us,” replied Foytlin. "When we have hurricanes like Katrina, that killed over 1,000 people, come up —we don’t have that protection that we would have.”

“In your experience, is the oil industry an important political player in Louisiana and neighbouring states?” McKibben asked.

"They have us by the throat, because they have all the jobs. But more importantly, they hold down our political system.”

Fighting against the company can make you a target, she said. “[They] had little meetings in towns and put pictures of activists up on the wall and said ‘This is public enemy number one.’”

“Even my own kids have been sick with different kinds of issues that we can trace directly back to oil related pollution.”

“I’m busy buying sand bags to keep the water out my front door. In a couple more generations here and my whole way of life is going to be completely under water.”

One of the last witnesses was Dr. Steingraber —an eminent U.S. biologist and a distinguished scholar at Ithaca College in New York. She’s considered one of America’s leading anti-fracking voices.

Naomi Klein asked her, "Sometimes natural gas gets marketed as a climate change solution. Is that the case based on your expertise?”

“It’s not a climate problem, in fact it’s a catastrophe for the climate,” Steingraber replied.

“Methane, the evidence shows, is a much more potent greenhouse gas than formerly appreciated. The IPCC estimates that over a 20-year time frame, natural gas, pound for pound, can trap 86 times more heat than CO2.”

She likened the company’s denial campaign to the tobacco industry’s pushback against the health risks of smoking. “Only with climate change, the stakes couldn’t be higher. It’s everybody —the whole planet and all the other species too.”

She’s a member of a group called Concerned Health Professionals of New York that also looked at the human health impacts of fracking. They reviewed more 500 fracking studies and published a report in October showing that 85 per cent of the studies concluded that fracking was bad news for people and the climate.

"So in addition to the deceptions that Exxon has precipitated regarding the actual existence of climate change and the role of fossil fuels, Exxon is also implicit in promulgating the idea that natural gas is somehow a more friendly fossil fuel compared to the other two members of the unholy oil and gas and coal [triad].”

In his closing arguments, McKibben said: "You have heard eminent scientists explain that because of the delay in [climate] action, because of Exxon’s failure to present the truth, we’re going to see increases in the level of the sea, and you’ve heard from people who will be driven from their homes.”

“It’s hard to imagine a set of corporate practices that could’ve done more damage and more damage needlessly. For that, we ask for a judgment against Exxon, and for the future of this planet.”

“There is no price that can be put on the Marshall Islands, on Arctic cultures, on the lives of our loved ones.”

One of the judges, Milañ Leak —daughter of the president of Maldives, said the evidence is “compelling" that Exxon’s business methods have caused "loss and damage" to those who live near by.

"The testimony is compelling that Exxon’s decision to deny climate change and work against climate action has dramatically escalated one of the deepest crises humans have ever faced,” she said.

And the verdict is...

“Given that as a court we lack the ability to compel testimony from Exxon, we are unable to reach a conclusive finding of guilt or innocence. The majesty of the law demands that a defendant be able to offer exculpatory evidence. However, we can ask other courts in other jurisdictions that have the power to summon this company before the law do so and with haste,” said Leak.

Back in the real courtroom in the U.S., the New York attorney general subpoenaed the company's records from the 1970s, which revealed the company had been conducting its own scientific research into global warming, and that senior executives simply ignored the findings.

Some of these memos have already been made public by investigative journalists at Inside Climate, an online environmental journal, The Los Angeles Times and the Columbia School of Journalism.

It remains unclear if criminal charges for Exxon will follow. But the Center for International Environmental Law in Washington, D.C. expects that the release of more of these records could result in civil suits from all manner of parties claiming global warming damages.

ExxonMobil did not respond for requests for comment this weekend. But regarding the New York case, its media relations manager Alan Jeffers wrote last month:

"We unequivocally reject allegations that ExxonMobil suppressed climate change research contained in media reports that are inaccurate distortions of ExxonMobil’s nearly 40-year history of climate research that was conducted publicly in conjunction with the Department of Energy, academics and the UN Intergovernmental Panel on Climate Change."

"ExxonMobil has included information about the business risk of climate change for many years in our 10-K, Corporate Citizenship Report and in other reports to shareholders."