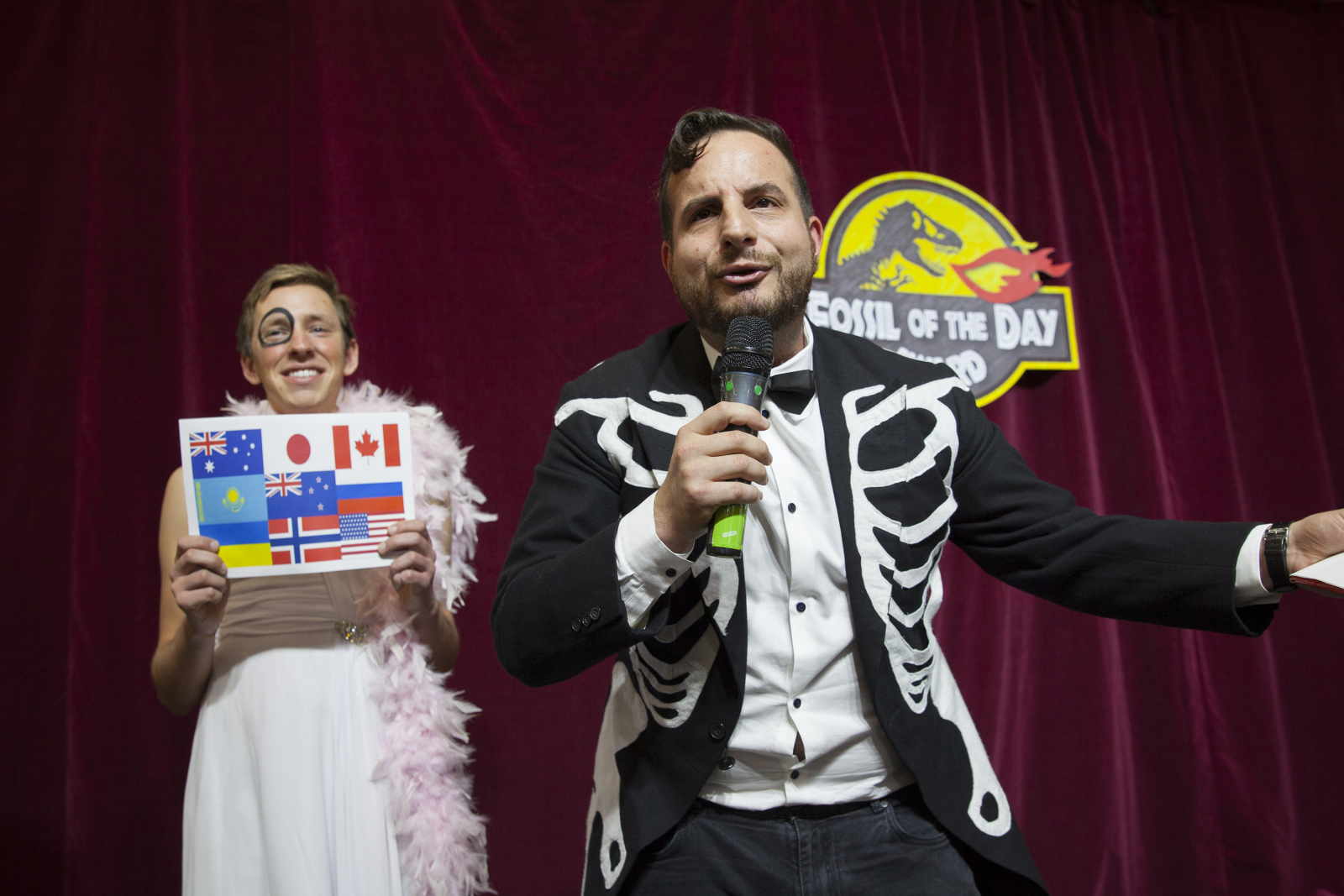 Fossil of the Day award was handed Thursday in Paris to a group of countries including Canada for not having more ambition towards 2020 targets. Photo by Mychaylo Prystupa.
Previous story
Next story

Despite the Trudeau government shedding much of its tarnished reputation as a global climate negotiations laggard, Canada won its second "Fossil of the Day Award" at the COP21 Paris climate talks.

Climate Action Network International gave the notorious distinction to Canada along with an “Umbrella Group” bloc of negotiating countries for “standing in the way of increasing ambition before 2020,” said the climate-negotiations watchdog group.

“In order to get a successful agreement here at COP, the agreement needs to be as ambitious as a young Napoleon Bonaparte on high heels,” said the group’s humour-hued announcer Thursday evening, to a large crowd at the summit.

The fossil award was given because two dozen developing nations —calling themselves the Like Minded Group of Developing Countries (LMDC) —said they’d make even deeper emissions cuts to help stop global warming, if rich countries committed to deeper pollution cuts too before the year 2020.

But that demand is getting blocked —and Canada, says the well-connected Climate Action Network, is a part of that opposition.

“All countries need to close the gap to emissions on the target as soon as possible, so by 2020 we can work harder at reaching more ambitious goals for 2030. Right now, we are dating Khloe Kardashian, when by 2030 we need to be dating Kim,” the announcer said with satirical jest.

The fossil award comes with just hours before an expected near final draft of the Paris accord, and tensions are high that poor countries are not likely to get assurances for so-called “Loss and Damages” —meaning, wealthy country financing for climate emergencies happening now.

"Frustration grows at COP21" - Video co-produced by Zack Embree and Mychaylo Prystupa in Paris for the National Observer.

West Coast Environmental Law, Young Liberals of Canada, and the Canadian Youth Delegation chastised the Trudeau government for not putting Loss and Damages more firmly in the accord’s language.

Ottawa has been given praise for backing a 1.5 degree global temperature target, as well for announcing funding for helping poor countries explore renewable energy, and helping adapt to climate change.

“But at some point, there’s a storm that wipes out 65 percent of the GDP in Vanuatu for example, earlier this year, and those communities have to rebuild,” said West Coast Environmental Law’s Andrew Gage.

“They need assistance today, just to get back on their feet. That’s not what [Canada’s] funding commitment is for. This is about urgent assistance for the most vulnerable people in the world.”

Nimra Amjad, 30, from Calgary, said Canada is “hiding” behind the U.S. which has long said it doesn’t want to be held liable for poor country’s climate-related havoc.

“I do [developing] work in Pakistan, and I’ve seen first hand in front-line communities affected by floods, where homes are being washed away, and they have absolutely no legal recourse.”

A spokesperson for Canada's Environment and Climate Change Minister Catherine McKenna said, "Canada is a partner with many groups as we proactively work for an ambitious agreement; for example today we were invited to join the High Ambitious Coalition."

Canada also won its first Fossil of the Day Award on Wednesday, along with New Zealand and the USA, for insisting on an "explicit exclusion of compensation and liability in the loss and damage negotiations," said Greenpeace.

Frustrations heat up in final hours of COP21 (VIDEO)