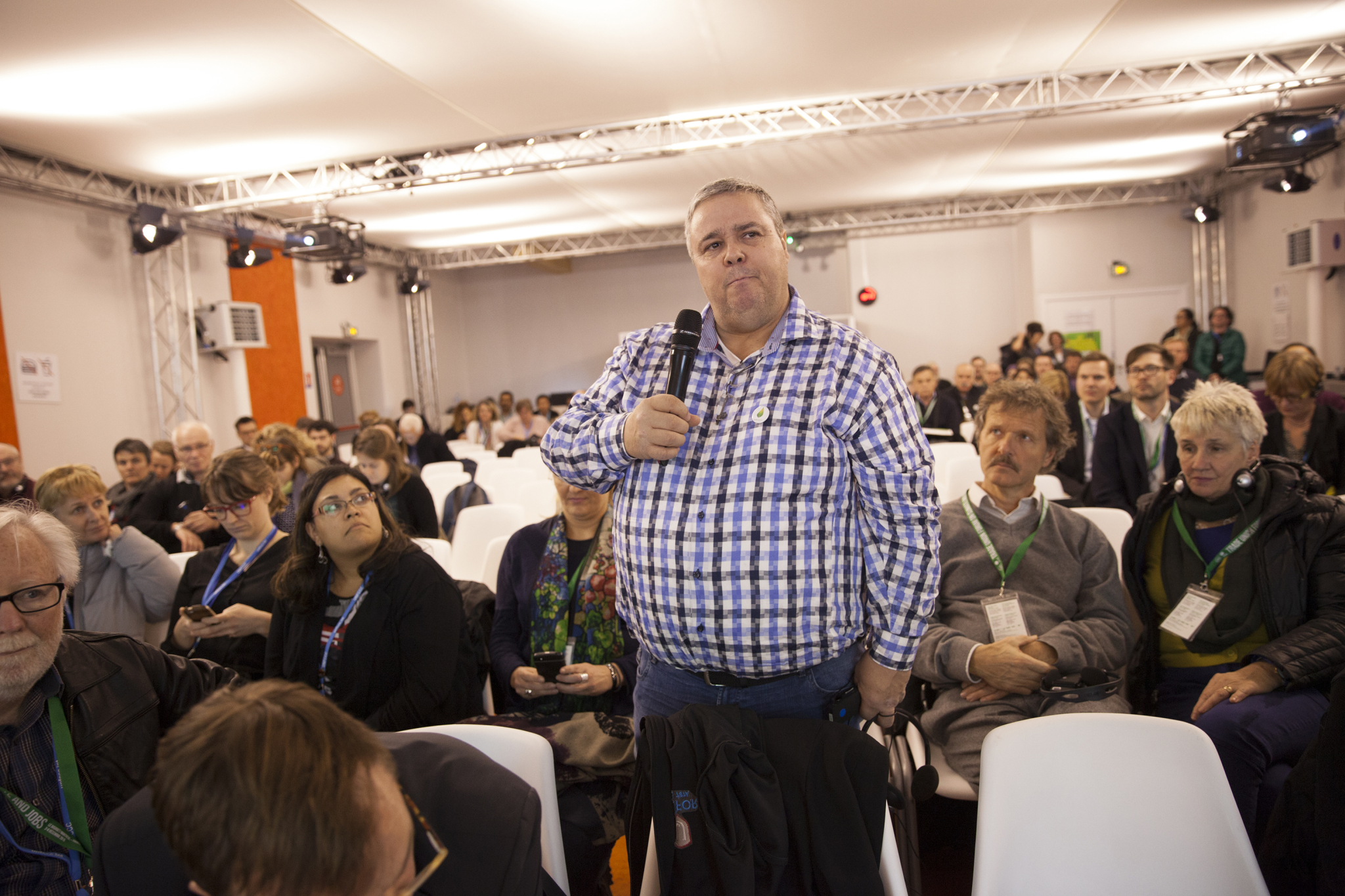 An unlikely climate change hero stood up at the Paris climate summit to urge the sunset of Canada's oil sands industry on Tuesday. He was neither an impassioned environmentalist, nor a panicked climatologist, but a 55-year-old Suncor heavy equipment mechanic from Fort McMurray, Alberta.

“We hope we’re seeing the end of fossil fuels for the good of everybody,” Ken Smith said into the microphone to a hushed room. "But how are we going to provide for our families?"

The father and tradesman, who also heads Unifor Local 707A, told a Canadian crowd at COP21 that oil workers "get it" about global warming. But if slowing down the industry is part of Canada's response, then don't leave workers behind in the process, he said.

“We’re going to need some kind of transition. We’ve moved out there, we’ve invested in that industry —and when it ends, we’re going to be left holding the bag,” said Smith, who had relocated his family to Alberta from Bathurst, New Brunswick in 2013. Smith's message comes amid news reports that suicide rates in Alberta had jumped 30 per cent in the wake of mounting job losses.

“Our employers will move on to the next shiny thing they see and make another billion dollars —but where are our workers going to go?”

Smith raised eyebrows in the room when he said he’s the union president for 3,500 oil workers in the heart of Alberta’s Big Oil country. Many workers' attitudes have shifted, he said, and know climate change is real and dangerous.

“Ten years ago, there was nothing but resistance from our workers. ‘This can go on forever, and it’s not so bad.’ But the science doesn’t lie, and we keep watching television. Last summer, northern Alberta and northern Saskatchewan were on fire. We’re seeing stranger and stranger weather.”

Video from One Million Climate Jobs event at COP21 in Paris last Thursday. Produced by Zack Embree for National Observer.

Smiths’ brave, honest words stirred a rousing standing ovation. The forum was put on by a unusual alliance of labour and environment thinkers: the Canadian Labour Congress, Climate Action Network (CAN-RAC), and the Green Economy Network.

The groups launched a "one-million climate jobs” campaign to spark serious dialogue about creating clean energy employment, while transitioning off the oil sands that were projected to double or triple in production and greenhouse gases.

The Pembina Institute said Canada will need to remove the “emissions equivalent of three oilsands” if Canada has any hope for decarbonizing the economy by 80 per cent by 2050 — a COP21 aspiration to avoid catastrophic sea-level rise, severe storms, and climate havoc. Oil sands represented 8.5 per cent of all of Canada's in 2013, according to the latest federal inventory.

While the previous Harper government advanced a pipeline agenda to expand the oil sector, new governments in Ottawa and Edmonton appear to be charting new climate courses. Environment and climate policy experts brag about now getting a welcome ear from politicians who once used to shun them.

Montreal-based Équiterre — one of seven environmental charities targeted for auditing under the Harper government — met privately with Prime Minister Trudeau last week in Paris. And Environmental Defence and Pembina Institute toasted the Alberta and B.C. governments on Monday at a Paris soirée also attended by Ontario’s and Manitoba’s premiers.

And while Alberta's new carbon tax and emissions cap measure have been applauded, the province's environment minister still suggested the oil sands will long be an economic force.

"Alberta is an energy producing jurisdiction, and will remain so for the foreseeable future. So what we need to do is exercise leadership to show that it can be done, and that our energy products compete for world markets and be sustainable, and demonstrably so," Alberta's environment minister Shannon Phillips said at the Paris party.

Yet as Ontario’s environment and climate change minister Glen Murray made clear, Alberta and its oil sands shouldn’t shoulder all the burden for tackling Canada’s still rising greenhouse gases.

"We can’t point fingers. Oil gets extracted in Alberta. But the thing that burns it up are automobiles made in Ontario,” he told the one-million climate jobs event audience Thursday.

Minister Murray is urging a national plan to retrofit millions of houses and buildings. "It’s really quite a sweet story. Buildings are about 20 to 25 per cent of emissions. We have to retrofit every single building we’ve ever built to get to net zero in the next few decades.”

“As the billions come back from cap and trade, we have to flow a lot of them back into buildings.”

He proposed that government and labour partner on re-training. Trades, he reminded, are highly unionized, and a national building retrofit effort would only expand good paying, pension-backed jobs with strong worker rights.

Merran Smith, executive director with Clean Energy Canada added that while the transition will be difficult, oil and gas workers will find lots of new jobs in renewable energy.

“The good news is that lots of the skills needed to work in the oil sands are going to be useful with clean energy," she said. "Electricians, welding, carpenters, engineers and more.“

"With electricity, renewable energy is the fastest growing job sector in Canada already – jobs were up 14 per cent in 2014. And as we transition to clean energy we will see that number grow," she said from Paris.

The Canadian Labour Congress — the largest labour organization in Canada, representing over three million workers — hopes a transition away from the oil sands will mean not a huge flight of billions in capital, taking the jobs out of the country.

"They will offshore their production to the extent they can get away with it,” said Canadian Labour Congress president Hassan Yussuff. "But make no mistake, we won’t let them leave workers behind. Or else there will be a fight, a fight we do not need, and do not want.”

Ken Smith said he was encouraged by the ambition of one million climate jobs campaign for Canada. But he pointed to a previous and failed industry-transition effort in Maritimes, where fisheries were shut down and governments trained workers in their sixties with computers skills for "jobs that weren’t there.”

A promised call centre boom for Atlantic Canada also failed to materialize as India took over that industry.

But he before he sat down, the Alberta oil worker told the crowd: "The scientists are saying [global warming] is not a fantasy, the fire is at our heels. So I'm asking everyone at this convention, help us build those bridges. We want to be full partners because we have no choice."