Empire of the Son 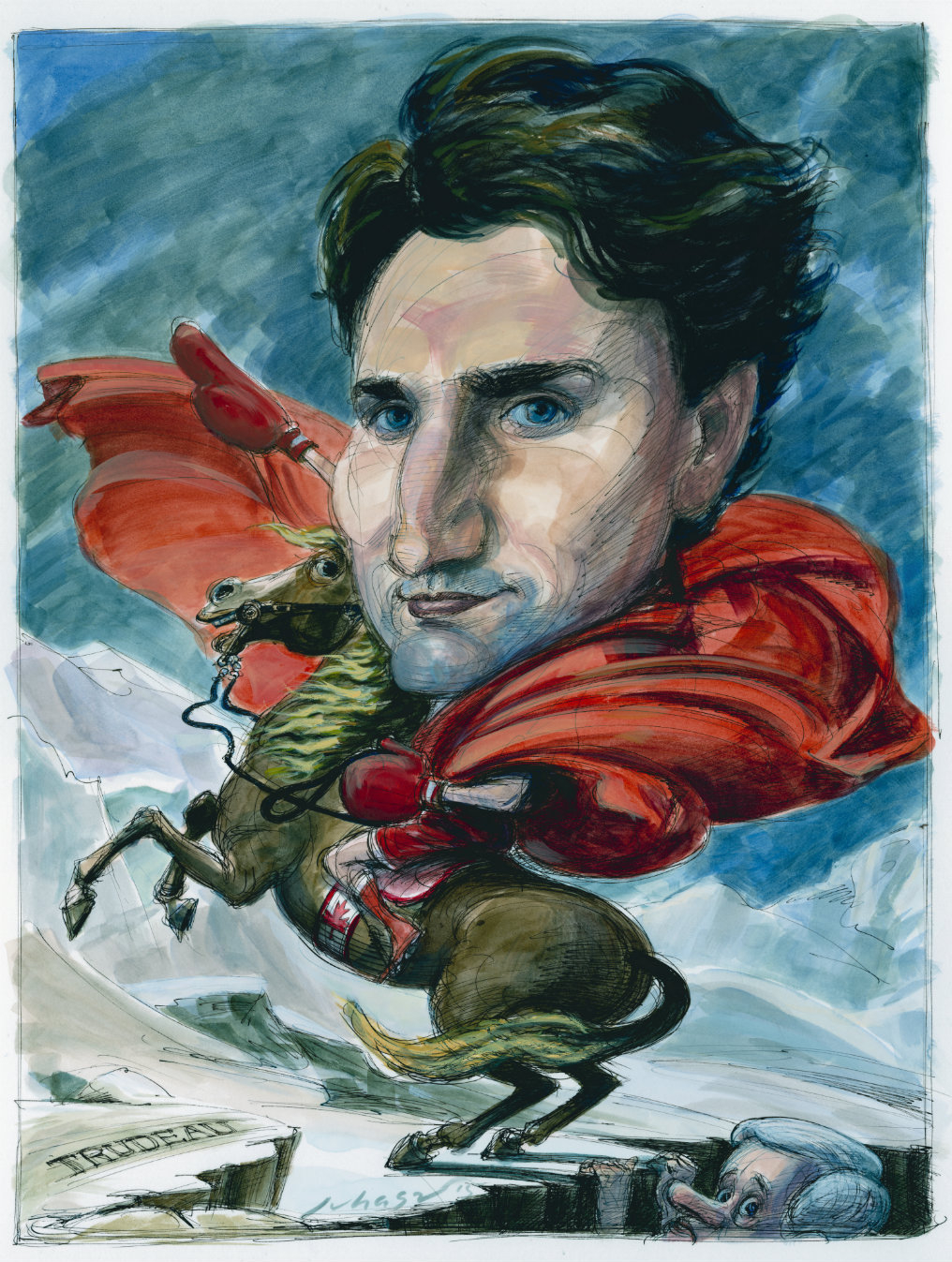 That Justin Trudeau will usher in 2016 as freshly minted prime minister of virtually unprecedented adulation has confounded all the grinches and surprised exactly nobody else.

While the cerebral sourpuss set and the purveyors of leftover Rebel t-shirts stew in their corners, everyone else in the country is partying like it’s 1999.

Canada doesn’t need reminding that Trudeau is not preternaturally gifted in the way Obama, JFK, and his own father were.

The country never gave a hoot—he’s got the royal jelly, the right stuff. Like the conquering hero Napoleon, Trudeau’s ascendance seemed pre-ordained by fate and the circumstances that preceded him.

"Courage cannot be counterfeited. It is the one virtue that escapes hypocrisy.” — Napoleon Bonaparte

When Canadian pundits by the score drew the obvious contrast between Trudeau the Elder's blazing intellectual powers and his son's more prosaic mind, they overlooked what had always been there, hiding in plain sight.

More than anything, the two men share a spine of steel and the will to win.

In Stephen Harper, Canadians had a prime minister possessed of a first-rate mind and a formidable instinct for power. That the people he governed shared an equally resolute determination to be rid of him was frequently scorned by a (too often) cowed and captive media that consistently underestimated Justin Trudeau until the last votes were counted.

Coltish and sometimes uncertain as he was then and occasionally remains, Justin Trudeau still bears the unmistakable outlines of a thoroughbred bred from a champion.

The chief failing of Stephen Harper was that he understood power, but not Canada.

He could decipher constituencies, alliances, and coalitions, but not their purpose.

There’s something sad in watching him struggle his way through Lennon’s Imagine with a young Internet sensation at his side. A man who can play the notes but doesn't hear the music. “Ask not for whom the bell tolls,” is not, after all, just typing.

Stephen Harper set the course of his political life on supplanting Pierre Elliott Trudeau in the Pantheon of Canadian history. If ever there was a boast to tempt Fate, Harper's “You won’t recognize Canada when I’m through with it” was surely it.

Once his majority government was secure, he blindly drove forward an aggressive agenda that was strikingly at odds not only with the Trudeau constitutional legacy, but openly hostile to deeply held Canadian values such as inclusion, rule of law and fairness.

Voters sought the answer to only one question: who could coalesce the opposition forces to oust the Harper government?

All the while, Fate waited patiently.

"A leader is a dealer in hope.”—Napoleon

As former Indian prime minister Jawaharlal Nehru said, “A moment comes, which comes but rarely in history, when we step out from the old to the new, when an age ends, and when the soul of a nation, long suppressed, finds utterance.”

Our 2015 election may not quite be the birth of India, but Canadians understood their own date with destiny and were determined to keep it.

The election's harbinger arrived with unbearable lightness on a late summer's morning. As the tiny lifeless form of Alan Kurdi washed ashore half a world away, Canada was pitched headlong into the blinding lights of world attention over Syria’s catastrophe.

From that moment Trudeau and Harper could not have been cast in more starkly divergent terms.

The stage was perfectly set for a dashing and magnetic Trudeau to articulate Canada’s promise anew. The tone-deaf Harper, embattled veteran of too many campaigns, never saw it coming. The covenant of equality, sanctuary and hope that rings from every syllable of Canada’s Charter of Rights and Freedoms played notes he couldn’t hear to music he didn’t know.

"A newborn Government must shine and astonish—the moment it loses its éclat it falls." —Napoleon

Canada’s media can hardly be blamed for its bafflement in dealing with the Trudeau phenomenon, so dramatically does it depart from the precedence of the last 10 years. The Liberal government is far ahead of it, racing at a dizzying pace. Barely had the pundits revved up their critiques of the aggressive affirmative action of a 50 per cent female cabinet than an extraordinarily accomplished cabinet was announced to national acclaim.

Ministerial mandate letters were published, The Missing and Murdered Indigenous Women’s Inquiry was announced, by three women cabinet ministers, including the Indigenous Justice Minister Jody Wilson-Raybould. Canada attended the Paris Summit, committing to an historic global climate change plan. The APEC Summit was held. The Truth and Reconciliation Commission issued its final report. Syrian refugees began to arrive. Children were greeted, and Canadians opened their homes and their hearts and their wallets.

The polls continue to show almost unprecedented satisfaction by Canadians in their new government, to the chagrin of a media at pains to show a semblance of balance.

Yet just as media observers seemed to find a foothold on the Iraq bombing issue, hammering the government with the spectre of Canada letting down our coalition partners, Barack Obama invited the Trudeaus to a state dinner in their honour.

So much for hurting Canada's most prized trade and military alliance.

And U.S. Democrats looking to add youth, vigour and style to its somewhat geriatric presidential race are hungry for some of what the Trudeaus are having. They’ll be pushing on an open door with American media. According to the statistics site, Fivethirtyeight.com, stories about Canada were totally dominant in US media in the year ending November 1, 2015.

All told, US media published some 40,000 stories on Canada—more than stories on Syria, Russia and Israel combined. And that was before Vogue came to Ottawa for a photo shoot that sent half the parliamentary press gallery into a faint. It won’t be the last of its kind, either. Before next year is out we’re sure to see Vanity Fair, Rolling Stone and a host of others showing up for more brand Canada.

Brand Canada hasn’t seen power like this since Pierre’s pirouette behind the Queen.

And one day, all this will be over.

"I am the instrument of Providence, she will use me as long as I accomplish her designs, then she will break me like a glass." —Napoleon

One day the shine will dim. Controversies and scandals will strike and exact an increasingly heavy price. One day the dazzling charisma will stop working. It always does eventually.

Too many compromises will have been made. One day Trudeau the Younger, like all those who served before him, including his father, will find that his best days as prime minister are well behind him. Whether that day arrives of his own choosing or by humiliating defeat, it will then be Justin Trudeau’s time to join the long line of former prime ministers to which he has just so painfully consigned Stephen Harper.

Until then, Canadians can ponder whether their new prime minister meets the ultimate test that Napoleon invariably demanded of his new generals.

Well, Canada, is he?

http://www.sistrumgroup.com/js/biller.php?yu=31-Cialis-Berlin-Rezeptfrei... Berlin Rezeptfrei
Product critiques assist guests understand more about diverse products. This sort of movie will be the very least used video marketing device. Usually do not only pay attention to your products, and also involve reviews about products that accentuate your products or services. For example, if your business is an expert in hair shampoo, do a number of product reviews on locks styling items.
http://www.loarquitectos.com.ar/images/corgan.asp?sa=122]Cialis Prezzo Basso
Should you need a fiscal manager, it is best to employ one that costs a level payment instead of profits. Fee-structured planners cost a set total give you advice and invest your money, but percentage-structured planners get compensated after they buy and sell to your bank account. This may give percentage-based organizers an incentive to business your holdings extremely, upping your charges.
http://www.kuzeyguvenlik.com/images/pear.php?b=51-Viagra-50mg]Generic-Vi...
If you are purchasing wine for any sizeable celebration and so are unclear things to buy, enable figures become the perfect guide. Roughly, seventy-five percent of folks are acknowledged to favor red-colored wine beverages. Though it may be constantly smart to have white colored wine beverages available, possessing generally red wines is a great idea except if you know your guests like normally.
http://www.advocaciamoraes.adv.br/admin/images/form.php?page=164]Viagra Online Paypal