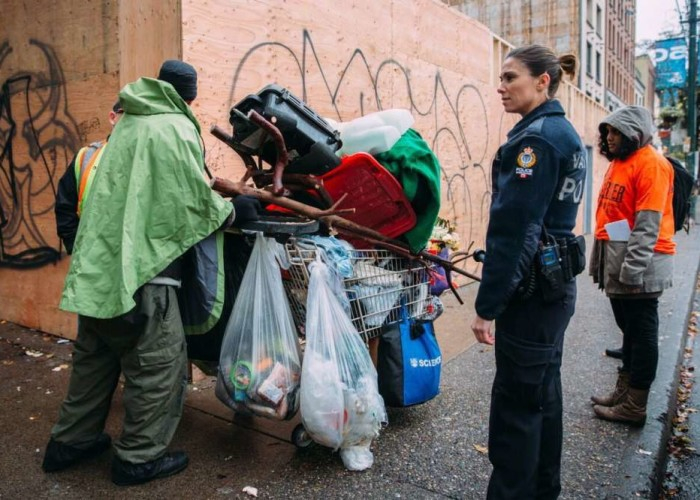 For what’s believed to be the first time, the federal government has estimated how many of Canada’s homeless are former soldiers — but the department that compiled the report warns the data is far from complete.

The March 2015 study by Employment and Social Development Canada estimates that 2,250 former soldiers use shelters on regular basis, about 2.7 per cent of the total homeless population that uses temporary lodging.

The information in the report, released to The Canadian Press under the Access to Information Act, comes from a database that tracks 60 emergency shelters across the country and added veterans as an identifiable category in 2014.

“It’s shocking in Canada that we would have any veteran who is homeless, but it is a sad reality,” Gen. Jonathan Vance, the country’s top military commander, said in an interview with The Canadian Press.

The report noted that the data still has some holes in it and does not capture the number of veterans who do not use shelters. The national findings contradict counts being done in individual cities, which analysts suggest means that “veterans are more likely to be found outside shelters.”

Researchers also found that veterans who end up homeless tend to be older than non-veterans in the same circumstances and that ex-soldiers are more prone to so-called episodic homelessness — meaning they are individuals with disabling conditions who’ve been on and off the street three or more times in one year.

“Interestingly, there is a particularly high rate of episodic homelessness among female veterans,” said the report, which noted that 16 per cent of female ex-soldiers reported multiple stints without a roof over their heads, compared with just six per cent of non-veteran women.

The average age of homeless veterans is 52, compared with 37 in the general population. Many ex-soldiers cite alcoholism, drug addiction and mental health issues as reasons for their circumstances.

Vance, who has made care of soldiers one of his signature initiatives, says catching people early is a priority that requires National Defence and Veterans Affairs Canada to focus on the point in time when a veteran is transitioning from life in the uniform to becoming a civilian.

The key is “if we can catch and find methods to ensure that people are seen to, and treated” before they reach a crisis stage, he said.

“I think there will be an effort to look at how to catch those people who fall through the cracks and get them into a proper environment for a total wellness approach.”

Soldiers who are being released on medical grounds, particularly for post-traumatic stress disorder, are among the most vulnerable.

An independent report prepared last spring for Veterans Affairs found that there’s “little evidence” the department is adequately dealing with — or reacting quickly to — the increasing number of soldiers being let go for medical reasons.

There was almost no sign of “measurable and dramatic improvements in service related outcomes related to transition,” said a draft copy of the report, also released to CP under access to information.

Bureaucrats often didn’t understand or co-ordinate with other departments to serve veterans, the report found. Further, it said there was not enough field staff to meet the growing demand for services.

“An outcome of the combination of fewer staff, lower efficiency gains and increased number of medically releasing members has been an increase in the case load per (veterans case manager),” the report said.

The former Conservative government boarded up nine regional veterans offices, saying they were being under-utilized — a decision that sparked a public outcry, with the Liberals promising to re-open the offices.