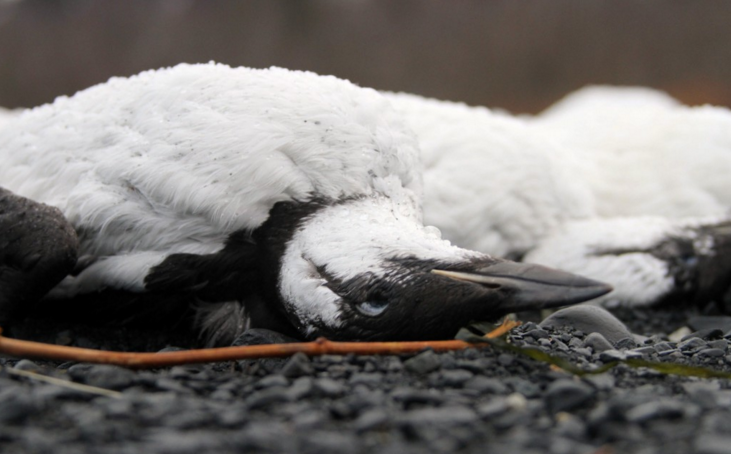 Around 8,000 dead common murres — one of North America's abundant seabirds — were found dead along a one-mile stretch near Whittier, Alaska this month, all apparently killed by starvation. Although seabird die-offs have occurred in past years, biologists are alarmed by the staggering number of dead birds found this winter.

“I never thought I would see that many dead birds on one beach,” David Irons, a retired seabird biologist from the U.S. Fish and Wildlife Services, told ThinkProgress.

Researchers say the cause of the birds' starvation remains uncertain, although climate factors may be involved. In addition to the starvation deaths, researchers have noticed unusual behaviour among the murres in Alaska over the past year. Although the birds usually have a breeding success rate of 50 to 60 per cent, surveys of breeding colonies in the region last summer showed no murres set up nests, leading to a total reproductive failure.

Murres were also found stranded inland, where it was impossible for them to catch fish.

Scientists took around 100 bird carcasses to National Wildlife Health Center in Wisconsin for testing, but found no toxins or diseases in their bodies. The starvation may be related to warming temperatures, as the average temperature in the U.S. in 2015 was found to be the second warmest on record at 54.4 degrees Fahrenheit (12.4 degrees Celsius), just behind the year 2012 (55.3 F (12.9 C) in 2012. Since the U.S. government started keeping records in 1895, 2015 was the 19th consecutive year that the the annual average temperature exceeded the 20th century average. Murres depend on forage fish such as capelin, which live mainly in cool water, and some suspect that their starvation is related to warming oceans.

The murre deaths in Alaska this year are the latest in a string of seabird die-offs in recent years, with starved birds found dead off the shores of the west coast of Canada and the U.S.