The hottest year in history: now what? 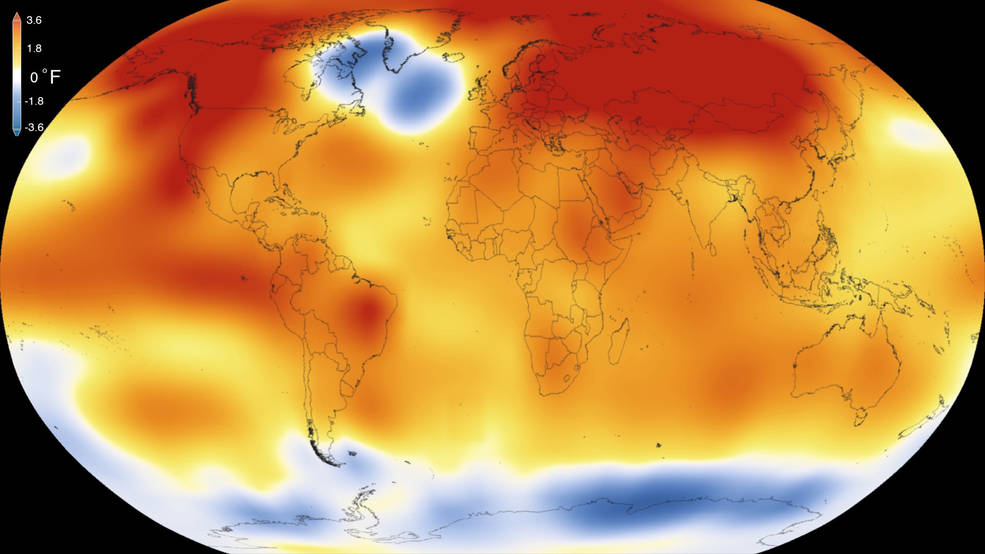 2015 was the warmest year since modern record-keeping began in 1880, according to a new analysis by NASA’s Goddard Institute for Space Studies. The record-breaking year continues a long-term warming trend — 15 of the 16 warmest years on record have now oc
Previous story
Next story

Announcing that 2015 was the hottest year on record, NASA issued a warning to policy makers that they need to act on climate change.

“Climate change is the challenge of our generation, and NASA’s vital work on this important issue affects every person on Earth,” said NASA Administrator Charles Bolden. “Today’s announcement not only underscores how critical NASA’s Earth observation program is, it is a key data point that should make policy makers stand up and take notice — now is the time to act on climate.”

Independent analyses from NASA and the National Oceanic and Atmospheric Administration (NOAA) confirmed 2015 temperatures were the warmest since modern record keeping began in 1880.

Globally-averaged temperatures in 2015 shattered the previous mark set in 2014 by 0.23 degrees Fahrenheit (0.13 Celsius). Only once before, in 1998, has the new record been greater than the old record by this much.

The planet’s average temperature has risen about one degree Celsius since the late 19th century. The agencies attributed the rise in temperature to increased carbon dioxide and other human-made emissions in the atmosphere.

Most of the warming occurred in the past 35 years, with 15 of the 16 warmest years on record occurring since 2001. Last year was the first time the global average temperatures were one degree Celsius or more above the 1880-1899 average.

“2015 was remarkable even in the context of the ongoing El Niño,” said Goddard Institute for Space Studies (GISS) Director Gavin Schmidt. “Last year’s temperatures had an assist from El Niño, but it is the cumulative effect of the long-term trend that has resulted in the record warming that we are seeing.”

The World Wildlife Fund’s director of climate science and integration, Nicky Sundt, warned that global warming is causing more climate extremes than ever with devastating impacts to people and wildlife from the Arctic to the Amazon.

Sundt called for a faster move to a low-carbon economy built on renewable energy sources. “Extreme events of the last year raise the urgency of slow the pace of future climate change.”

Aaron Packard, head of 350.org’s climate impacts program, said that a warmer atmosphere in 2015 resulted in floods in parts of India, the U.S., the U.K. and China; deadly heat waves across India, Pakistan and the Middle East; and severe drought from Africa to California.

“The sheer pace with which global warming is moving is truly alarming, yet more people worldwide are choosing to be on the right side of history and stand up for climate action,” Packard said.

“In short, we need to make 2016 the year that the world breaks free from fossil fuels.”

Weather dynamics often affect regional temperatures, so not every region on Earth experienced record average temperatures last year. For example, NASA and NOAA found that the 2015 annual mean temperature for the contiguous 48 United States was the second warmest on record.

These raw measurements are analyzed using an algorithm that considers the varied spacing of temperature stations around the globe and urban heating effects that could skew the conclusions if left unaccounted for. The result of these calculations is an estimate of the global average temperature difference from a baseline period of 1951 to 1980.

NOAA scientists used much of the same raw temperature data, but a different baseline period, and different methods to analyze Earth’s polar regions and global temperatures.

The 2015 temperatures continue a long-term warming trend, according to analyses by scientists at NASA’s Goddard Institute for Space Studies (GISS) in New York (GISTEMP). NOAA scientists concur with the finding that 2015 was the warmest year on record based on separate, independent analyses of the data.

Because weather station locations and measurements change over time, there is some uncertainty in the individual values in the GISTEMP index. Taking this into account, NASA analysis estimates 2015 was the warmest year with 94 per cent certainty.