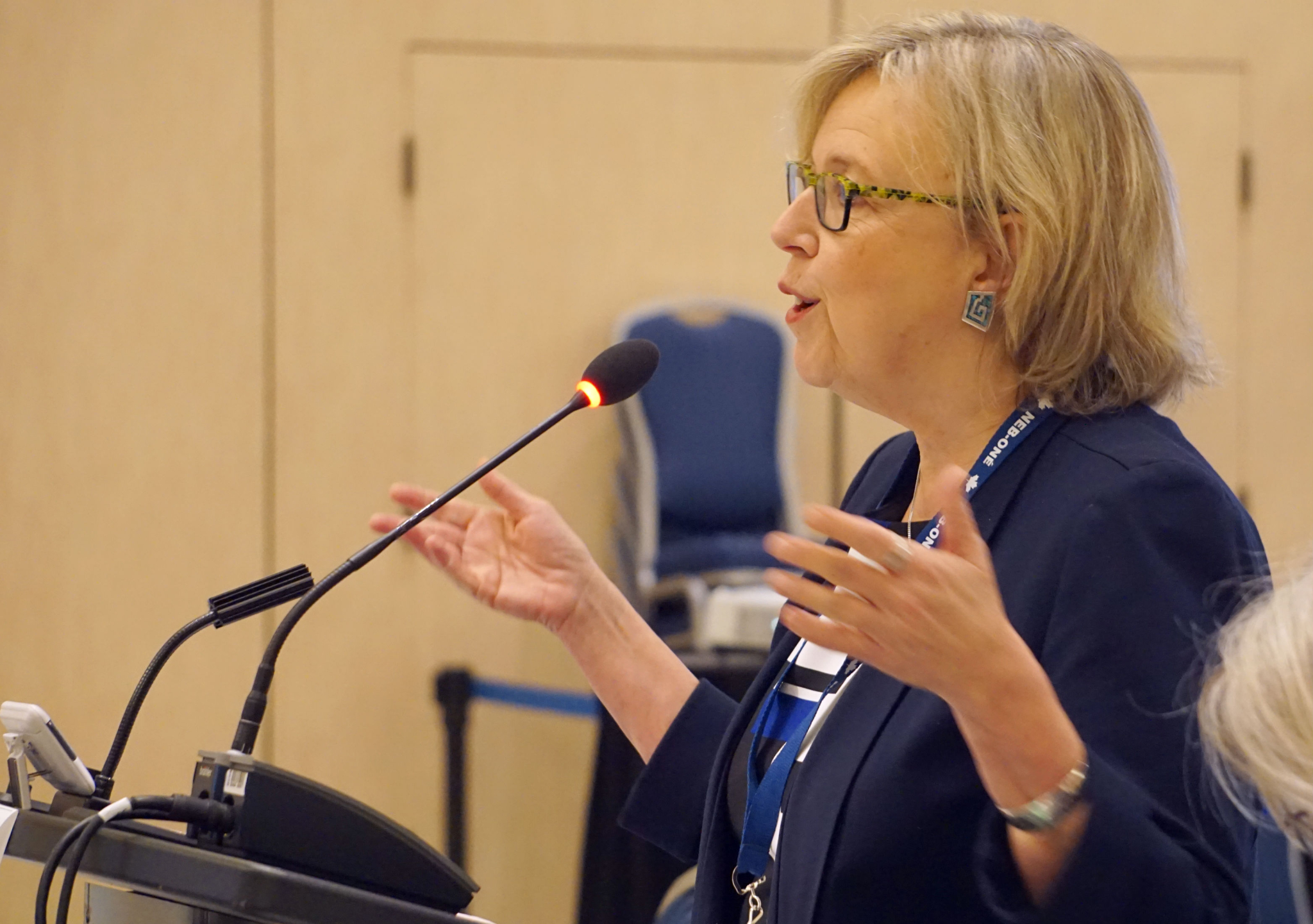 Elizabeth May begs the National Energy Board not to recommend approval of the Kinder Morgan Trans Mountain expansion during the hearings in Burnaby, B.C. on Thurs. Jan. 21, 2016. Photo by Elizabeth McSheffrey.
Previous story
Next story

Moments before Elizabeth May took the stand at the National Energy Board (NEB) hearings for Kinder Morgan’s Trans Mountain pipeline expansion, she admitted she was nervous.

“I don’t want to get too angry,” she told National Observer with a smile, organizing a massive stack of documents and pages upon pages of handwritten notes.

When she stepped before panelists on Thursday however, the Green Party leader and MP for Saanich-Gulf Islands was confident and comprehensive. She got straight to the point:

“I think the National Energy Board is completely unsuited and should never again be put in charge of environmental assessment,” she said boldly, criticizing the 2012 omnibus bill that put the board in charge in the first place. She first urged, then implored, and then begged to have the expansion proposal "die here" at the hearing in Burnaby, B.C.

The Trans Mountain expansion, if approved by cabinet, would triple the capacity of an existing pipeline that carries 300,000 barrels of refined petroleum and crude oil from the tar sands in Alberta to refineries and marketing terminals in Vancouver and Washington.

Application based on “untested evidence”

May covered many of the arguments brought up by previous interveners — the project’s potentially devastating impact to land and marine ecosystems, unwavering opposition from Indigenous people, and the safety risks posed to residents and wildlife if an oil spill or tank fire were to occur.

A trained lawyer however, she appealed to the panelists from a procedural perspective, and said the NEB should not make its recommendation based on evidence that had never been cross-examined:

“I submit to you that there is a significant frailty to the evidence that would not be in place had cross-examination occurred,” she said, referencing a U.S. Environmental Protection Agency oil spill modelling report that Kinder Morgan presented as scientific evidence to the NEB, despite the report being labelled a “draft.”

“It’s the only evidence they have for a terrestrial-based oil spill,” she explained. “Despite repeated effort and motions by [withdrawn intervener and economist] Robyn Allan to have that evidence removed, it stayed. “I think that contaminates the process by fraud.”

May carried on to accuse Kinder Morgan, a Texas-based oil company, of intentionally downplaying the possibility of devastating accidents like a diluted bitumen oil spill (which has happened before — see the Kalamazoo River oil spill) while overemphasizing highly unlikely scenarios like “curious milk cows” interfering with pipeline construction and “pipeline construction increasing the risk of avian flu.”

“I cant find any record of this happening in real life, unlike the 'low-probability' events of tanker leaks,” she told panelists as interveners in the room chuckled, and applauded. “Why are these fanciful low probability events treated as credible, but a worst case scenario in Vancouver is not credible?”

May learned about these pressing concerns of Kinder Morgan’s while pouring through the 23,000-page application it submitted to the NEB. She paid $900 to have the document printed at a local copy shop, so she could pore through it personally by hand.

“My conclusion is that Trans Mountain set out to make their application necessarily long with the intention of intimidating people from approaching it as I actually did,” she said.

“They made it long to discourage people from participating so they could brag and say, ‘We have a very rigorous process because we produced thousands and thousands of pages of evidence… of for the most part, repetitive useless garbage.”

May showed National Observer a picture of the 23,000 page document spread out on her kitchen table in the video below, which also provides her perspective on whether Prime Minister Justin Trudeau may have broken election promises by allowing the NEB hearing to take place in the first place.

WATCH: May sympathizes with Trudeau on NEB election promise

Green Party leader Elizabeth May sympathized with Prime Minister Justin Trudeau for having to deal with the NEB mess left behind by the previous government and showed off the 23,000-page document submitted by Kinder Morgan to the NEB. Video by Devyn Brugge.

May was joined in the hearing room by Simon Fraser University biochemistry and molecular biology department head Lynne Quarmby, who ran for the Green Party as MP in Burnaby-North Seymour during the 2015 federal election. She was defeated by Liberal candidate Terry Beech, who during the campaign, promised constituents that the Kinder Morgan expansion project would have to go through a "new, revised process."

As pointed out by many interveners, the proponent never did. At multiple points during the hearings, participants criticized the NEB review as a "sham." Quarmby — who was arrested during the Burnaby Mountain protests last year against the pipeline expansion— was nearly in tears at the thought of the project being approved.

Activist, politician, and scientist Lynne Quarmby was nearly reduced to tears at the thought of Kinder Morgan's Trans Mountain expansion being approved. Video by Devyn Brugge.

Both she and Elizabeth May sided with the British Columbia Civil Liberties Association (BCCLA), which today, called on the NEB to immediately open its hearings to the public and "let some sunshine in." According to the human rights watchdog, the board is legally a court, and like all courts, has a duty to make its hearings open and physically accessible.

“Under Canadian law, a public hearing should only be closed if there is a real and substantial risk to the administration of justice,” said Laura Track, lawyer for BCCLA. “There is no evidence of any threat to the proceedings that meets the legal test to keep the public out. That’s why we think closing these hearings to the public is potentially unlawful.”

The NEB hearings on the expansion, whose costs are now estimated to exceed $6.8 billion, will continue in Burnaby until Jan. 29.