By Elizabeth McSheffrey | News | February 1st 2016
#9 of 476 articles from the Special Report: State Of The Animal 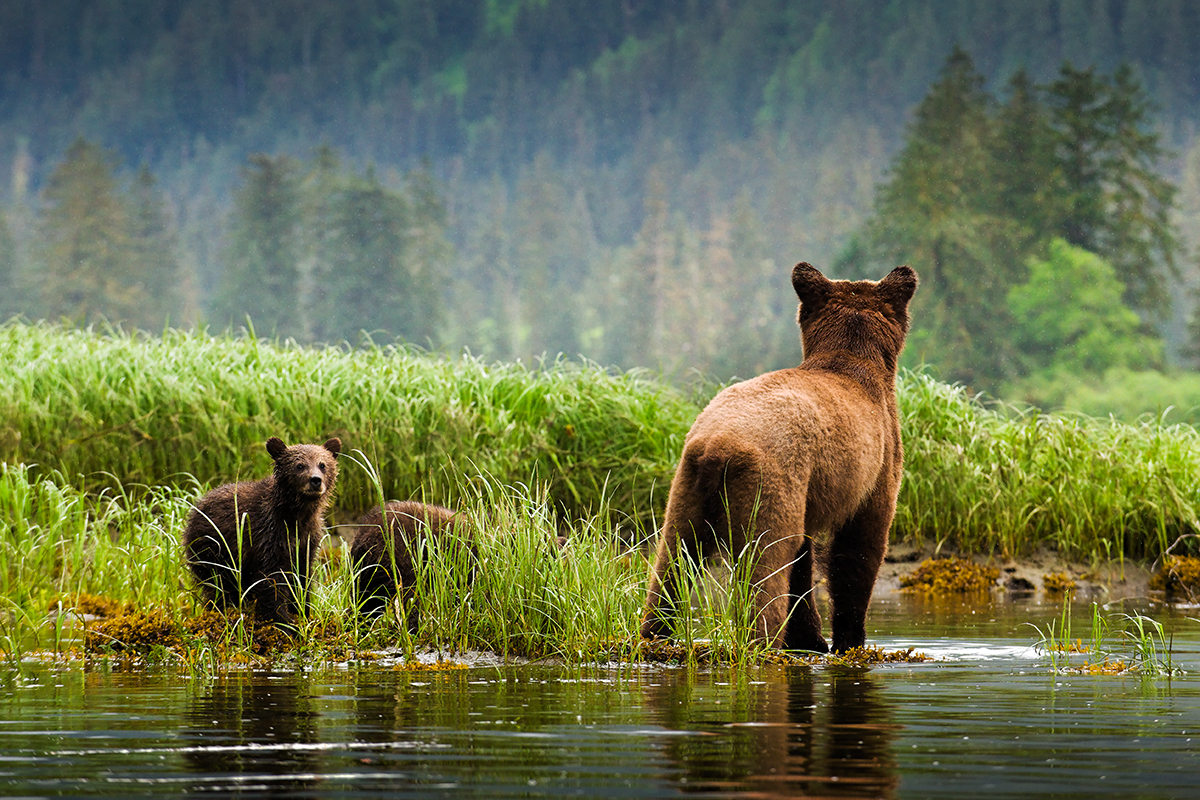 A mother grizzly bear tends to her cubs in the Great Bear Rainforest. Photo by Andrew S. Wright.
Previous story
Next story

Indigenous leaders, stakeholders, and the B.C. government celebrated victory today in an unprecedented collaborative agreement protecting 85 per cent of Canada's Great Bear Rainforest from commercial logging. According to the new arrangement, timber harvesting will be banned from 3.1 million hectares of rare coastal rainforest, with new legislation on its way to enforce it.

While the trees may be safe in this pristine wilderness area, it turns out that the wildlife — grizzly bears in particular — may not be. Despite the sweeping conservation agreement, trophy hunting grizzly bears will still be permitted in the southern parts of the Great Bear Rainforest according to the B.C. Ministry of Forests, Lands and Natural Resource Operations.

During the momentous announcement ceremony in Vancouver on Monday, Forests Minister Steve Thomson mistakenly told media that the new agreement will wipe out the controversial practice in the rainforest for good:

"The agreement today as we announced retires the commercial hunt for grizzly bear for the Great Bear Rainforest," he told reporters. "Protecting the species is the first principle and we will continue to manage the process elsewhere on a science-based approach to grizzly bear and wildlife management generally."

Speaking with National Observer however, ministry communications director Vivian Thomas later clarified that grizzly hunting will be banned in Coastal First Nations territory only. She could not confirm if this decision formed part of the Great Bear Rainforest Order announced on Monday or a private arrangement negotiated on other terms, but pointed out that grizzly hunting is already banned in more than 1.1 million hectares of the rainforest protected under bear sanctuaries.

"The ministry and Coastal First Nations reached a memorandum of understanding relating to the commercial grizzly bear hunt," she explained. "There are two licenses [for bear hunts] that are already held and the quota with those is retired. Then Coastal First Nations is looking to buy the four other guide outfitter certificates and that would be on a buyer-willing-selling basis. Then if they purchase those, the quota associated with those is retired."

But grizzly hunting is still allowed in all the areas of the Great Bear Rainforest that it is currently allowed, according to Raincoast Conservation Foundation marine operations program coordinator Brian Falconer. Although Coastal First Nations issued a ban on all trophy hunting in its traditional territory, the province still issues licenses to resident (B.C.-based) hunters to kill grizzlies in the Great Bear Rainforest.

"This false sense of relief is deadly," said Falconer. "Sixty per cent of grizzly kills in the province goes to resident hunters."

The Great Bear Rainforest — territory belonging to the First Nations of the Nanwakolas Council — is thus still open to grizzly bear trophy hunt hopefuls when the season rolls around later in the year. Dallas Smith, president of the council, confirmed that his communities could not afford to buy out the outfitters with hunting tenure in the region.

"Our nations — we have some relationships with some outfitting (companies) that we’re still clarifying and trying to work out," he said. "We aren’t anywhere near having the dollars to buy them out, whereas Coastal First Nations have been working on this campaign and they’re ready to buy out those tenures for the trophy hunt. It’s a little bit slower in our area."

More than 90 per cent of B.C. citizens oppose the grizzly bear trophy hunt, according to polls by Insights West. Coastal First Nations have further enacted a tribal ban on trophy hunting in their grounds since 2012, a move supported by more than 10,000 B.C. residents.

A Coastal First Nations representative could not be reached for comment in time for publication, but on behalf of his own First Nations, Smith said a province-wide ban on trophy hunting is something they hope to pursue.

"We still have a nation that’s not quite dead set against it, but in principle we’re not for trophy hunting as we need food and sustenance," he said. "We understand there are existing economies out there and it’s all part of our relationship-building process.

"You deal with the issues you can deal with right now, then use that as a figure head to keep moving forward and bring some of that sustainability to it. We look forward to broadening what Coastal First Nations has done and making that work throughout British Columbia."