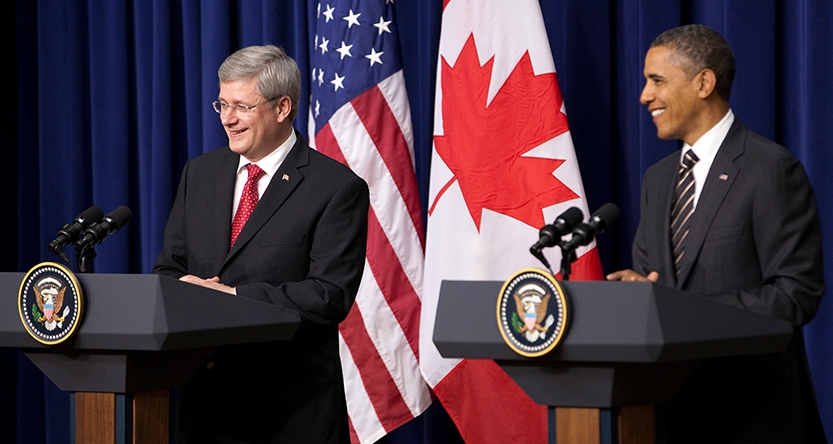 Former prime minister Stephen Harper wanted to pull Canada out of one of Europe's leading security organizations four years ago, but U.S. President Barack Obama helped convince him to stay.

Three European ambassadors described on Monday what happened in 2012, when Harper suggested Canada would withdraw from the Organization for Security and Co-operation in Europe, a 57-country alliance that includes NATO and European Union countries.

The diplomats said Harper believed the organization was no longer relevant because Europe was mainly peaceful, a view that was widely shared at the time.

The outbreak of hostilities between Russia and Ukraine would later change that.

The diplomats said Canada was persuaded to stay with Obama's help and would later become a major participant in the OSCE, especially when the Ukraine crisis began to escalate.

The German, Serbian and Austrian ambassadors recalled the events of 2012.

The Harper government echoed a widespread feeling that the organization didn't have a job to do because there was no more conflict in Europe, said Wnendt.

"The best news is we won't need the OSCE in the future, because everything will be resolved."

Arno Riedel, the Austrian ambassador, said Canada was only raising questions that other states also asked, because "we all thought we defused tension in Europe."

Conservative foreign affairs critic Tony Clement said the organization was one of several options the former government put on the table as part of its spending review across all departments.

"I guess we looked at it for a little bit, realized it was valuable for Canada to continue to be part of that organization. And so, we didn't cut the funding," Clement said in an interview.

"We thought we were at the end of history in Europe, but that proved unfortunately not to be the case."

The flare-up of the Ukraine-Russia conflict has since highlighted the importance of the group, said Riedel.

"We need to have channels where we can communicate. And that is the OSCE."

The organization has played a major role in monitoring on the ground since Russia annexed Ukraine's Crimea region in 2014, sparking the worst crisis between Russia and the West since the end of the Cold War.

Meanwhile, the OSCE is trying to gain more access to eastern Ukraine, which is held by Russian-backed separatists, to monitor what has been a shaky ceasefire.

Fighting between Russian-backed rebels and Ukraine forces in the eastern part of the country has killed 9,000 people since April 2014.

Riedel said Ukraine has been relatively quiet since December, but no one knows what Russia might do next.

The organization has a large presence on the ground doing technical work to keep the situation stable, he added.

In the last year, the number of OSCE monitors in Ukraine has grown to 600 from 200, said Mihailo Papazoglu, the Serbian ambassador.

The previous Harper government was a vocal supporter of Ukraine's sovereignty, as is the current Liberal government.

Both parties condemn Russia's incursions, but the Conservatives have accused the Liberals of cosying up to the Russians because they want to open diplomatic lines of communication.

There are about 1.3 million Canadians of Ukrainian descent, which makes them an important constituency domestically.

Wnendt said the current Liberal government is "keen to support" the OSCE.

He also noted that the new Liberal foreign policy has stressed the need for Canada to play a greater role in international organizations.