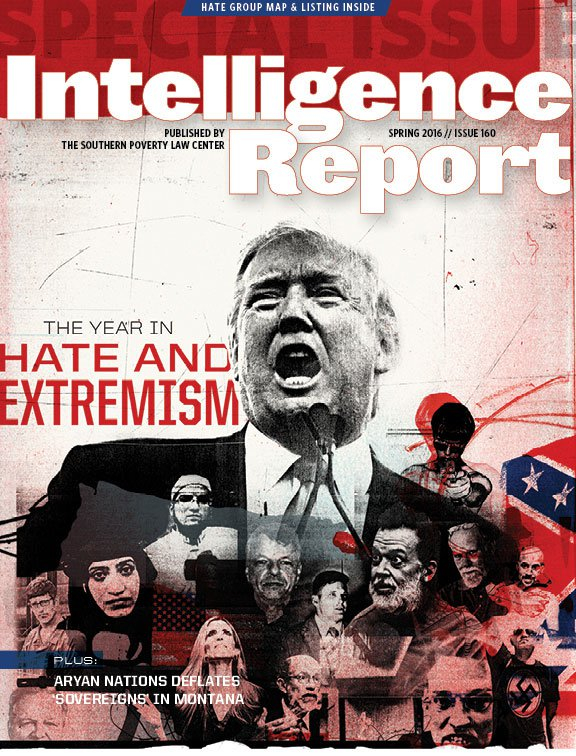 Donald Trump is depicted on the cover of a new report on hate in the U.S. Image courtesy of the Southern Poverty Law Center
Previous story
Next story

The SPLC released the statistics Wednesday in a new report, The Year in Hate and Extremism.

With the increase in hate groups came an increase in domestic political violence in the U.S., both from the radical right and from American jihadists.

“They used firearms, bombs, C-4 plastic explosives, knives and grenades; one of them, a murderous Klansman, was convicted of trying to build a death ray.”

Using statistics from a year-end report from the Anti-Defamation League, the SPLC said a minimum of 52 people died from extremist violence in the U.S. in the past 12 months.

That was the most in a year since 1995, the year of the Oklahoma City bombing that left 168 men, women and children dead.

The SPLC reports a growth in Klu Klux Klan chapters from 72 in 2014 to 190 in 2015 and attributes the rise in the 364 pro-Confederate battle flag rallies last year.

Those took place after South Carolina took down the battle flag from its Capitol grounds following the June massacre of nine black churchgoers by a white supremacist flag enthusiast in Charleston, S.C.

On the opposite end of the political spectrum, black separatist hate groups also gained strength, going from 113 chapters in 2014 to 180 in 2015. The SPLC says the growth followed the explosion of anger fostered by highly publicized incidents of police shootings of black men.

“But unlike activists for racial justice such as those in the Black Lives Matter movement, the black separatist groups did not stop at demands for police reforms and an end to structural racism. Instead, they typically demonized all whites, gays, and, in particular, Jews,” Potok writes.

Potok notes that terror can breed hate crimes. After a jihadist couple in San Bernardo, California murdered 14 people in December 2015, it triggered a string of physical attacks on mosques and Muslims.

To be sure, the report offered less than flattering portrays of the Republican presidential front-runners when it came to fanning the flames of dissent.

The SPLC went so far to use Trump’s image on the cover of its report.

Inside, the SPLC makes no apologies, noting: The armed violence was accompanied by rabid and often racist denunciations of Muslims, LGBT activists and others — incendiary rhetoric led by a number of mainstream political figures and amplified by a lowing herd of their enablers in the right-wing media.”

The group says that the right-wing politicians are fostering a sense of polarization and anger in the U.S. that might be unmatched since the political upheavals of 1968.

“White supremacist forums are awash with electoral joy, having dubbed Trump their ‘Glorious Leader.’ And Trump has repaid the compliments, retweeting hate posts and spreading their false statistics on black-on-white crime.”

The report noted that Donald Trump described President Dwight D. Eisenhower’s brutal “Operation Wetback” as a “very humane” way to accomplish mass deportation, and responded to the beating of a Black Lives Matter protester at a campaign rally by saying, “Maybe he should have been roughed up.”

And it also reported that Trump claimed to have personally seen “thousands and thousands’ of New Jersey Muslims celebrating the 9/11 attacks — something that both law enforcement and media investigations have thoroughly debunked.”

Calgary-born Ted Cruz was taken to task for “baselessly” suggesting in November that the man who murdered three at a Colorado Planned Parenthood was a “transgendered leftist activist.”

In Canada, two researchers just released a report in early February titled Uneasy Alliances: A Look at the Right-Wing Extremist Movement in Canada.

The report is behind a journal paywall and the lead author, Ontario professor Barbara Perry, could not be reached for comment, but according to a piece in the Georgia Straight the researchers found about 100 right-wing extremist groups currently operating in Canada.

The groups, only having three to 12 members each roughly, operate largely in Quebec, Western Ontario, Alberta and B.C. and have targeted Muslims, Jews, people of colour, First Nations and LGBT people, according to the Straight.