Race stumbles in its storytelling 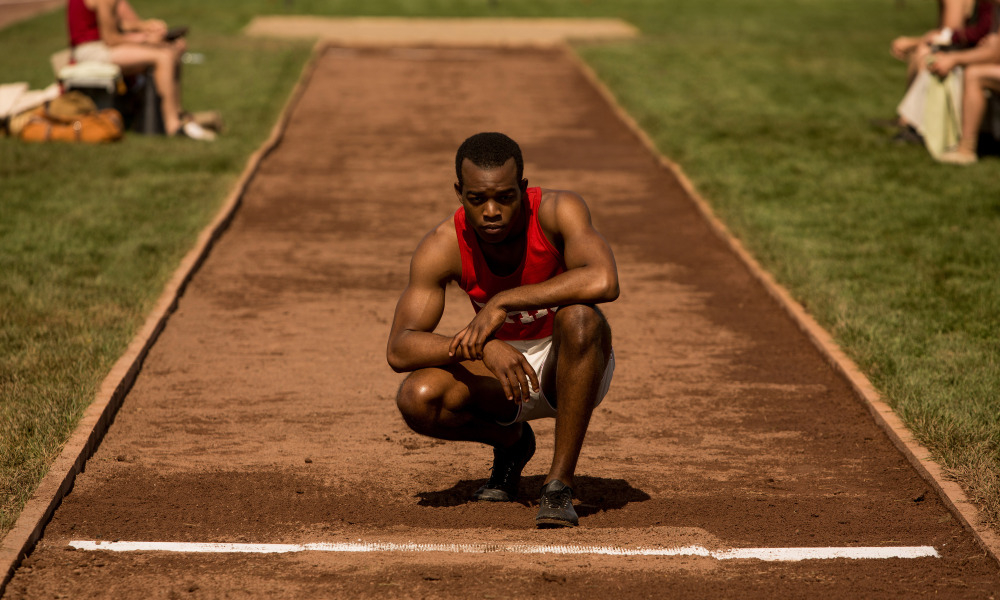 Race, the new biopic on four-time Olympian gold medalist and track star Jesse Owens, isn’t, like its subject, a clear winner. In fact, it’s safe to say that while the film is a crowd pleaser, it offers, at best, silver medal performances.

The subject matter in and of itself is certainly dramatic enough. The film spans three years, moving from the slums of Cleveland, Ohio in the Depression to the contentious 1936 Olympic Games in Berlin under the rule of Adolf Hitler.

During the early part of the film director Stephen Hopkins (best known for Predator 2 and Lost in Space) shows the reflexive racism of the time when Owens and another runner come off the track at the school for the first time.

The all-white members of the football team stride into the showers, and chase the pair out while viciously mouthing racist names at them. It's an eye-opening moment within the film.

While Owens trains at the track, in the background the American Olympic Committee is debating whether it should pull out of the 1936 Olympics with the rise of fascism in Germany.

A developer and Olympic committee member, Avery Brundage (Jeremy Irons) is dispatched to Germany to assess the situation.

If the drama is slow to build in the first half of the film, then think of it like a runner’s warm up: the muscles need to stretch and loosen a bit before a bolt to a satisfying finish.

That said, for a film about a sprinter Race certainly has its plodding moments.

The first half of the film teases with snippets of Owens training and rushes through his outstanding performance at the Big 10 championships in Ann Arbor, where he set three world records.

Instead, Hopkins chooses to concentrate on the relationship between Owens and his coach, and the track star and his soon-to-be wife, Ruth Solomon (played by Shanice Banton, best known perhaps for Degrassi: The Next Generation).

Neither relationship adds much depth to the characters. Snyder is the very stereotype of the well-meaning but gruff coach, while the film spends far too much time on a fling Owens has while at the track meet, which triggers a bout of jealousy in Solomon. (While Owens did, after his world record performance in Michigan, take up briefly with a woman while engaged to his wife, it seems almost a frivolous side note here.)

The more necessary back-story occurs with Brundage’s trip to Germany, where he witnesses Jews being rounded up in what is meant to be a clear parallel to the time’s racist treatment of blacks in America.

The second half of the film, set in Germany, offers the true drama and spectacle inherent in the gripping competition of the Olympics. One of the movie’s best scenes shows Owens entering the Olympic stadium for the first time, utterly overwhelmed with the sheer scale of the event and the thundering crowd gathered to witness history.

Early on in the film one of the members of the American Olympic Committee says that sport and politics don’t mix well. That’s certainly the case in Race.

The film leans heavily on the political side at the expense of the sport. With the exception of two scenes set during the Olympic competition, Owens’ running is shown only in short bursts - much like the 100 metre dash in which he excelled.

At the same time, Race - the double entendre in the title is well warranted - is better at the portrayal of the brutal casualness of American racism and its counterpart in the evil regime of Nazi Germany.

Yet even its German setting the film remains broad rather than specific. For instance, German filmmaker Leni Riefenstahl (Carice van Houten) is seen making her ground-breaking documentary of the games, Olympia.

But while Riefenstahl is shown directing and filming, no real sense is given to the viewer of just how revolutionary her style of filmmaking was at the time and how with Olympia she pioneered many of the movie techniques such as extreme close-ups which are now considered standard today.

In the same way, many of the performances in the film lack emotional depth. The one exception is German actor and director Barnaby Metschurat’s portrayal of Joseph Goebbels, Hitler's Minister of Propaganda. Metschurat’s Goebbels is a menacing character whose contempt for people radiates evil. It’s a chilling performance.

While Race is ultimately uplifting (the music near the end even swells and echoes that great running classic, Chariots of Fire), it doesn’t offer the best treatment of either running or of racism.

Last year’s McFarland USA - the moving, true story of an ill-tempered American coach who trains a team of poor migrant workers in a California barrio town to become champion cross-country runners - offered not only more stirring scenes of running and competition, but was subtler in its exploration of race.

And 2014’s 42, the story of how Jackie Robinson broke the colour barrier in baseball, and an obvious model for Race, was far more dramatic and compressed in its story-telling.

Despite all that, Race is a feel-good story that might stumble along the way, but certainly leaves its audience cheering at the finish.