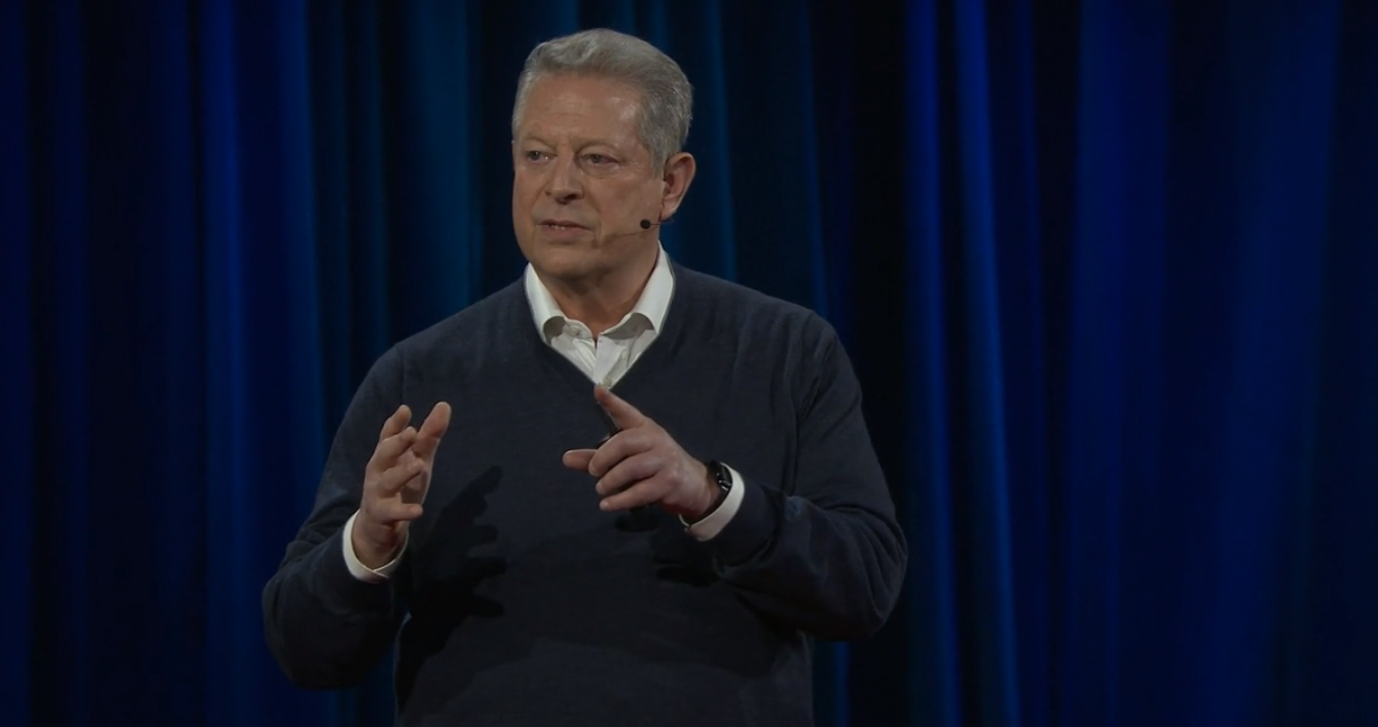 Amidst the struggle to control the steady rise in global warming; the constant stream of climate refugees from Syria and other countries; the massive, damaging superstorms that are a consequence of climate change, Al Gore is back—and he says there's reason to hope.

“Some still doubt that we have the will to act, but I say the will to act is itself a renewable resource,” Gore declares in a new TED Talk titled The case for optimism on climate change.

You might be forgiven for wondering where the silver lining is in the talk given by the Nobel Peace Prize recipient, author of the renowned book An Inconvenient Truth and former U.S. vice-president.

Gore doesn’t sugarcoat the reality of climate change. In compelling, eye-opening and simple language and using the most up-to-date data, he presents a picture of a planet in turmoil.

Joking to the audience at the TED Talk recorded in Vancouver and released in late February, Gore comments: “I was excited to be a part of the ‘Dream’ theme, and then I found out I'm leading off the ‘Nightmare’ section of it.”

Gore says because of the “dirty, carbon-based fuels” the world burns every year, global emissions have accelerated after World War II.

They’ve reached the point where the accumulated amount of man-made, global warming pollution in the atmosphere now traps the heat energy equivalent to 400,000 Hiroshima-class A-bombs exploding every 24 hours, 365 days a year.

“Fact-checked over and over again....it’s the truth,” Gore tells the crowd.

That’s led to 14 of the 15 hottest years ever measured all having occurred in the last century, with 2015 being the hottest of them all.

Ninety-three per cent of that heat energy is trapped in oceans, leading to destructive ocean-based storms and causing the average humidity from evaporated water vapour to rise four per cent globally.

That has created what scientists call atmospheric or “flying” rivers, which channels the water vapour over the land where they become massive record-breaking downpours.

At this point, Gore shows the audience some truly astonishing images on the large screen behind him. As he talks about record amounts of water cascading down upon cities and causing flooding, pictures of warehouses, cars and oil tankers are seen sliding along in rushing rivers of water spilling though city streets.

In July 2015, during a two-day period, 162 billion gallons of water fell on Houston, Texas.

“That represents more than two days of the full flow of Niagara Falls in the middle of the city,” Gore tells the crowd.

“Every night on the TV news now is like a nature hike through the Book of Revelation,” he says to laughter.

But Gore is only partially joking.

He continues on to talk about devastating droughts and their geopolitical consequences, including the creation of climate refugees; Arctic melts with associated rise in sea level; the spread of microbial diseases; and the mounting economic cost of the climate change crisis.

But just when you think it can’t get any darker, Gore begins to talk about the enormous strides made in renewable energy in the last five years. Since 2010, installations of wind and solar power have surpassed previous projections while at the same time the cost has dramatically decreased.

Renewables have reached what’s known as the grid parity point in business. Gore explains that, that is the threshold below which renewable electricity is cheaper than electricity from burning fossil fuels.

Another way he puts it is by calling it the difference between ice and water.

“And it’s the difference between markets that are frozen up, and liquid flows of capital into new opportunities for investment. This is the biggest new business opportunity in the history of the world and two-thirds of it is the private sector.”

At that same time, other nations are rapidly changing. China is instituting a cap-and-trade system for 2017 and that will likely link up with the European Union.

“We are solving this crisis,” Gore declares. “As I said before, we are going to win this.”

During his well-structured, persuasive talk, Gore presents a few other surprising facts. He thanks a handful of Republicans who broke away from their party to declare that climate change is real and a serious issue.

And he talks about the chairperson of the Atlanta Tea Party, Debbie Dooley. The Tea Party approached her in an effort to have a tax placed on solar panels and regulations.

“And she had just put solar panels on her roof and she didn’t understand the request,” Gore tells the audience to much laughter.

Dooley ended up forming an alliance with Sierra Club. Together they formed a new organization called — wait for it — the Green Tea Party, which went on to defeat the proposal.

Gore’s TED Talk is a marvel of concision, compressing a lot of very complicated data into an easy-to-understand format.

Gore himself is an entertainer. He holds the audience’s attention, doesn’t shy away from levity, and knows how to drive his points home in this beautifully structured presentation.

His latest TED Talk is educational, informative and ultimately uplifting. Do yourself a favour and watch it.