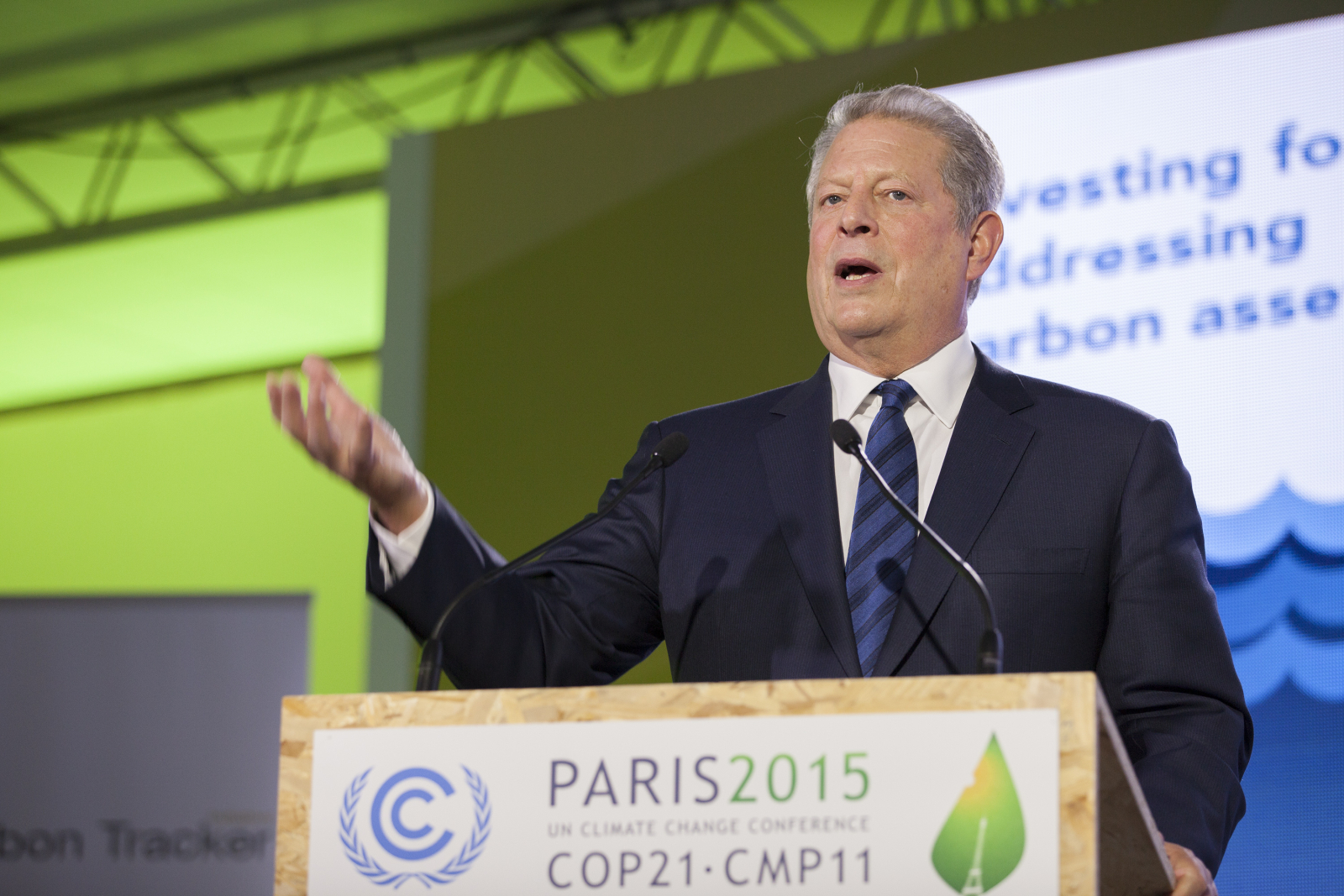 "We are seeing a tremendous advance in our ability to shift to renewable energy... [in] the explosive growth of rooftop solar, utility-scale solar, onshore wind and now offshore wind,” Gore said Thursday in a speech at the COP21 UN climate summit videotaped by National Observer.

Al Gore video on the cost competitiveness of renewables. Video shot by Mychaylo Prystupa, and edited by Zack Embree for the National Observer in Paris.

By contrast, Gore says, dirty fuels have become less competitive against wind and solar due to unforeseen technology advances— but also because of new carbon restrictions being imposed by nations this week in Paris to curb planetary warming to less than two degrees.

Fossil fuel companies are at risk of having their hydrocarbon reserves become “stranded assets,” Gore said.

“Many do understand, there are multiple pathways to stranding. Action at this conference is one. Action by the state of California, and Ontario and Alberta by the European Union and local governments [are others].”

The Pembina Institute says changes being implemented in Paris will reduce the global demand for Canada's oil sands bitumen over time.

"Canada's oilsands, as a high-cost oil fossil fuel reserve with above-average carbon impacts, are unlikely to remain cost competitive as demand for oil wanes," says Erin Flanagan, an oil sands analyst with the institute from Paris.

"These trends should give Canada and Alberta pause, and both jurisdictions should take note of the material risk stranded fossil fuel assets pose to investors and their own coffers alike."

As the world shifts to a clean-energy economy, a major part of COP21 involves negotiations over how to divvy up the room that’s left in the atmosphere for global warming pollution.

This means carbon taxes, cap and trade, and other climate measures taken by Canada and other countries are imperiling fossil fuel companies’ futures—and their stock valuation— by making their products more expensive.

This will create "explosive growth in demand” for renewables, said Gore, as the cost threshold of 'cheaper than’ is increasingly crossed. “[And] we’re seeing that threshold crossed in region after region, all over the world.”

This of course, is bad news for fossil fuel companies —and oil company giants have tried for decades to push back.

“There are active efforts to fool investors. The attorney general in the state of New York just announced a criminal investigation into ExxonMobil alleging the company misled investors into believing the climate crisis is not real —by paying pseudo-scientists and others to put out false information, to try to create the illusion that nobody needs to worry about the climate crisis.”

Gore said the “best” business predictions made in the year 2000 —the same year he narrowly lost the U.S. presidency to George Bush —were that by the year 2010, the world would add 30 gigawatts (GW) of wind energy.

Just like how one degree of warming at zero Celsius transforms ice to water, so too will a new lower cost for renewables unleash a clean energy revolution, he said.

“Because the explosive growth in demand, once that threshold of 'cheaper than’ is crossed, is quite remarkable.”

Renewables have even become cheaper than fracked natural gas —itself a major energy transformation. He pointed to open U.S. state pricing competitions in Colorado and Minnesota, that had new wind and solar power winning: both were cheaper for electrical production than burning fossil fuel.

Your next kilowatt hour is free

The secret is renewables’ zero marginal cost —meaning, “the next kilowatt hour is free once your solar and wind is in place,” he said.

That’s what led TXU —an investor-owned Texas power company to tell their customers 'From 9pm to 6am, the next morning, use all the electricity you want for free.'

The former U.S. vice president asked the Paris audience, 'Do we have to change?' He then cited global warming effects: Florida has seen fish swimming in its streets; Antarctica, the Arctic and Greenland are fast melting; and somewhere in the world, there’s a weather record being broken every day by a new extreme, such temperature, flash floods, mudslides, droughts and powerful storms.

He pointed to a flash downpour in India on Thursday that prevented a Hindu newspaper from publishing for the first time in its history.

“Watching the TV news every night is a like a nature hike through the Book of Revelation.”

Then Gore pointed to climate change's health effects with reference to Canada.

“The Canadian Medical Association did an analysis of how the climate changes are driving tick populations into areas that never had them before. Their prescription was to call upon doctors to become more politically active to work for change in Canada’s global warming policy.”

“I might note,” he chuckled, “they succeeded, as we heard in the plenary speech by Justin Trudeau on Monday.”

“Can we change? For anyone who doubts we have the political will to act, please remember that the will to act is itself a renewable resource.”