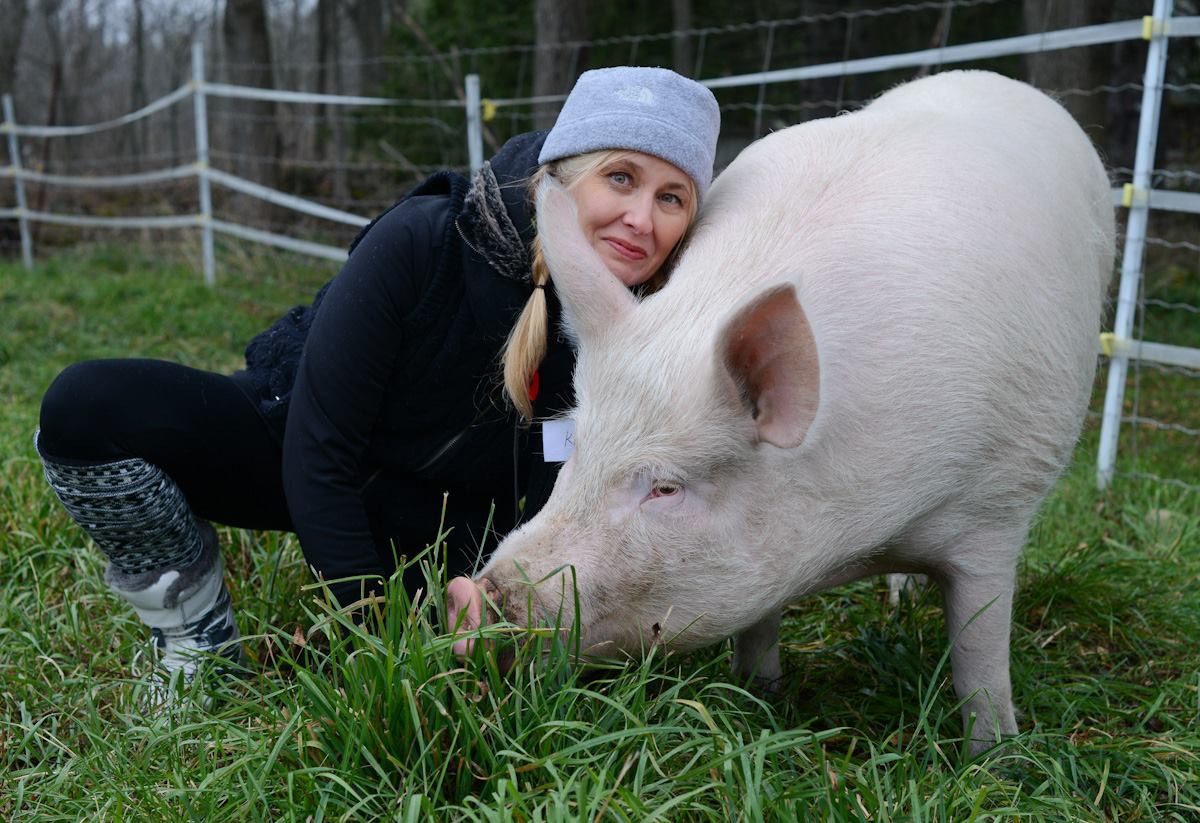 The video caused an uproar.

Maple Lodge got caught, but many other transport companies and processing facilities get away with murder because when it comes to transporting animals in Canada, the country lags far behind other civilized jurisdictions in the world.

And despite the best efforts and concerted lobbying of animal advocates, they’ve had no luck in getting the regulations changed for 10 years now.

Nearly 700-million animals were hauled from farms to slaughterhouses last year. The number of companies that transported them is unknown - a spokesperson at the Canadian Trucking Alliance said he didn't know of any statistics on animal transport - but one thing animal advocates insist on is that the birds, pigs and cows that go to the abattoirs suffer terribly before they're slaughtered.

An exterior shot from the hidden footage shot at Maple Lodge shows a semi-trailer pulling up to the plant. The truck is coated in snow and the chickens appear exposed to the cold and elements. Inside their cages, many have their wings, heads or other body parts trapped and smashed in transport cage doors.

Headquartered in Brampton, Ontario, Maple Lodge’s website declares its chicken comes “naturally from the farm, made with natural ingredients.”

The food processor, established in 1955, does over $50-million annually in business.

Undercover video showing the treatment of chickens. Video courtesy of Mercy for Animals

“What is particularly noteworthy is that in Canada we fall far behind every other Western country as it relates to animal transportation,” contends Krista Hiddema, the managing director of Mercy for Animals.

When it comes to how live, breathing animals are shipped to slaughter, Canada’s regulations fall well behind the standards of Australia, New Zealand, the European Union and the United States.

“I think it has everything to do with the Conservative government over the last decade failing to update the regulations,” Hiddema says, who estimates eight million animals die in transport annually.

Out of step with animal welfare science

Barbara Cartwright, CEO of the Canadian Federation of Humane Societies, agrees. She calls the transportation regulations out of date and out of step with animal welfare science.

“We have been calling and working for unfortunately more than a decade to get these transportation regulations updated to better protect the welfare of animals that are being transported to slaughter,” Cartwright says.

It’s obvious the laws need to be addressed. While from farm to table sounds appetizing, the truth about how chicken, pork and beef arrives on dinner plates is less than palatable.

It wasn’t the first time Maple Lodge Farms had come to the public’s attention for its transportation practices, for instance.

In 2014, the Ontario Court of Justice in Brampton, Ontario fined the processor $80,000, assessed additional victim fine surcharges of $13,800, and issued a probation order that required Maple Lodge to invest no less than $1-million over three years in its animal transportation operations.

The sentencing came after the Canadian Food Inspection Agency (CFIA) laid charges in 2010 against the company for injury and “undue suffering” of chickens caused by exposure to weather or inadequate ventilation during transportation.

Simply put, thousands of the birds froze to death on the trucks.

The court also ordered the company to post a summary of facts supporting the convictions in a prominent place on their website. Today, that summary is nowhere to be seen.

Maple Lodge does specify at length on its website actions it has taken in the transportation of animals. The company says it has spent more than $1.5 million on research to improve live bird transportation and has enlisted a committee of experts: veterinarians, ventilation experts, animal behaviourists and others – to find solutions to the “complex and challenging issue.”

The committee is researching such things as air-flow through trailers, and temperature and humidity gradients.

Maple Lodge also says it enforces a zero tolerance policy for any employees found in violation of humane care practices and has added two full-time certified animal welfare auditors to its team.

According to the company, the transportation of live birds is a surprisingly complicated issue. It notes that chickens pant like dogs to regulate body temperatures, creating a build-up of condensation in the trailers, which can later freeze in cold conditions or intensify heat in warm weather.

Maple Lodge says working to create micro-climates insides the trailers to maintain comfortable conditions for the chickens is controversial within the industry with conflicting research over how to achieve that goal. “It is not unfortunately a quick fix….”

But the company’s claims don’t fly with everyone. In April 2015, Animal Justice Canada filed a complaint against Maple Lodge with CFIA and the federal competition bureau. Among other things the complaint addressed Maple Lodge’s record of transporting live birds.

The Competition Bureau informed Anna Pippus, Animal Justice’s director of farmed animal advocacy, in late January that it was not going to pursue the complaint and would let CFIA handle the issue.

“In my opinion, this is simply passing the buck.” Pippus says. “The Competition Bureau has a mandate to address false advertising that impacts the proper functioning of a competitive marketplace.

“Lying to consumers about how chickens are treated is anti-competitive behaviour because, among other things, it prevents consumers from understanding why it's important to select ethical vegetarian alternatives.”

If Maple Lodge were the only company implicated in poor transport practices, it might not be an issue. But that’s not the case.

In 2014, Mercy for Animals released another video with undercover footage, this one filmed at the Western Hog Exchange, a pig assembly yard in Alberta.

The video showed pigs dying from stress, dehydration and severe injuries sustained during transport after being trucked hundreds of kilometres in overcrowded semi-trailers.

That video prompted a letter from a number of animal rights groups to then Conservative Minister of Agriculture and Agri-Food, Gerry Ritz. Calling for changes to the legislation, the groups wrote: “Canadians are compassionate people who have no appetite for animal abuse.

“Yet our transport regulations are at odds with Canadian values, allowing severe animal suffering to flourish.”

Canadians for the Ethical Treatment of Farmed Animals have repeatedly filmed video of animals being abused during transport. Their videos include footage of the overuse of electric prods on pigs, and turkeys being forcibly flung into crates by laughing workers.

Are these unusual examples, exceptional and rare cases of animal abuse?

Not according to Cartwright. "Yes, they do get away with it more often than not. And a lot of it has to do with lack of funds for proper enforcement, which has to be put in place along with modernizing the transportation regulations," she says.

While CFIA was unable to provide National Observer as to how many enforcement officers it has working in the field or its budget, a clue might be found in CFIA’s 2014-15 Report on Plans and Priorities under the guidance of then federal Health Minister Rona Ambrose. The "priorities" called for a $35-million cut to the CFIA, which was carried out, in 2015.

Within the industry, training is voluntary and largely provided through a group called Canadian Livestock Transport. They provide an industry-led program that offers drivers, handlers and dispatchers some five hours of training.

Livestock welfare specialists or individuals who previously hauled livestock teach the drivers modules that deal with cattle, sheep, hogs, horses and poultry. Some 2,000 drivers have taken the course, but Geraldine Auston, the national coordinator for the program, says they haven’t “touched” everybody. Auston is also the general manager for the B.C. Pork Producers' Association.

Auston says the program is the same for all the species. “I like to call it the sandwich,” she says. “The bread is all the same.”

The “bread” deals with the Canadian laws and regulations. The “filling” is instruction specific to the handling and behaviour of each species. The courses cover such things as pre-trip planning, things they may encounter on the road, and considerations when they arrive at the destination.

So is the program working? Are the animals experiencing better treatment?

“I would have never said they were poorly treated in transport beforehand,” Auston says.

She acknowledges that truckers have to deal with extreme weather conditions, but says if trucks are boarded up the proper way with enough ventilation, the animals are comfortable. “The animals are warm animals,” she says, meaning they keep each other warm during cold trips.

Auston believes drivers are doing their very best to fix the situation. Talking about the Maple Lodge incidents, she says, “We firmly believe things will go wrong in anything. Anyone does. It’s not specific to this situation.

“But it’s what you do about it when things go wrong that matter. We know that things go wrong in livestock transport as they do in everything. It’s about mitigating that for the future, so that we don’t have issues.”

Except that there are issues.

Currently, the legislation for the transport of farm animals is not adequate, according to the Canadian Coalition for Farm Animals. Pigs, horses and chickens may be transported 36 hours without water, food or a rest stop. Within Canada, cows, sheep and goats can go 52 hours without those amenities. Impatient truckers use electric prods on the animals; jostling in overcrowded trucks can cause some animals to be crushed, while others suffocate from inadequate ventilation.

Yet for all that the legislation remains unchanged. Cartwright points out the current legislation was written decades ago and is vague, making it difficult to enforce. Nor are the regulations in step with current animal science.

“There’s a number of issues that needs to be improved and the government has been dragging its feet on this for more than a decade,” Cartwright says.

Nor have the advocacy groups been able to determine the cause of the delay. Changing the regulations is a simple process. The regulations don’t have to go through a bill reading in Parliament; rather, they are subjected to a public consultation and then a gazetting process.

“What we’re missing here is the will to update the regulations,” Cartwright says.

Hiddema says Mercy for Animals is now calling on the new Liberal Agriculture and Agri-Food Minister, Lawrence MacAulay, to “stand up and quickly update these horrendous animal transportation regulations.”

The response from a National Observer query to CFIA media relations brought back the tepid answers that “The Government of Canada continues to review the humane transport provisions in the Health of Animals Regulations.”

The agency says the proposed changes will improve animal welfare, better align the regulations with international standards, reflect current industry practices and animal needs, and will improve enforcement capabilities, among other things.

There’s only one catch: there’s still no timeline as to when all of this might happen. And in the meantime the animals will continue to suffer.

“That’s unfortunately what we’ve heard for a long time, is that they [the regulations] are coming,” Cartwright says. “They’re working on it and there’s not a whole lot to say - which is unacceptable.”