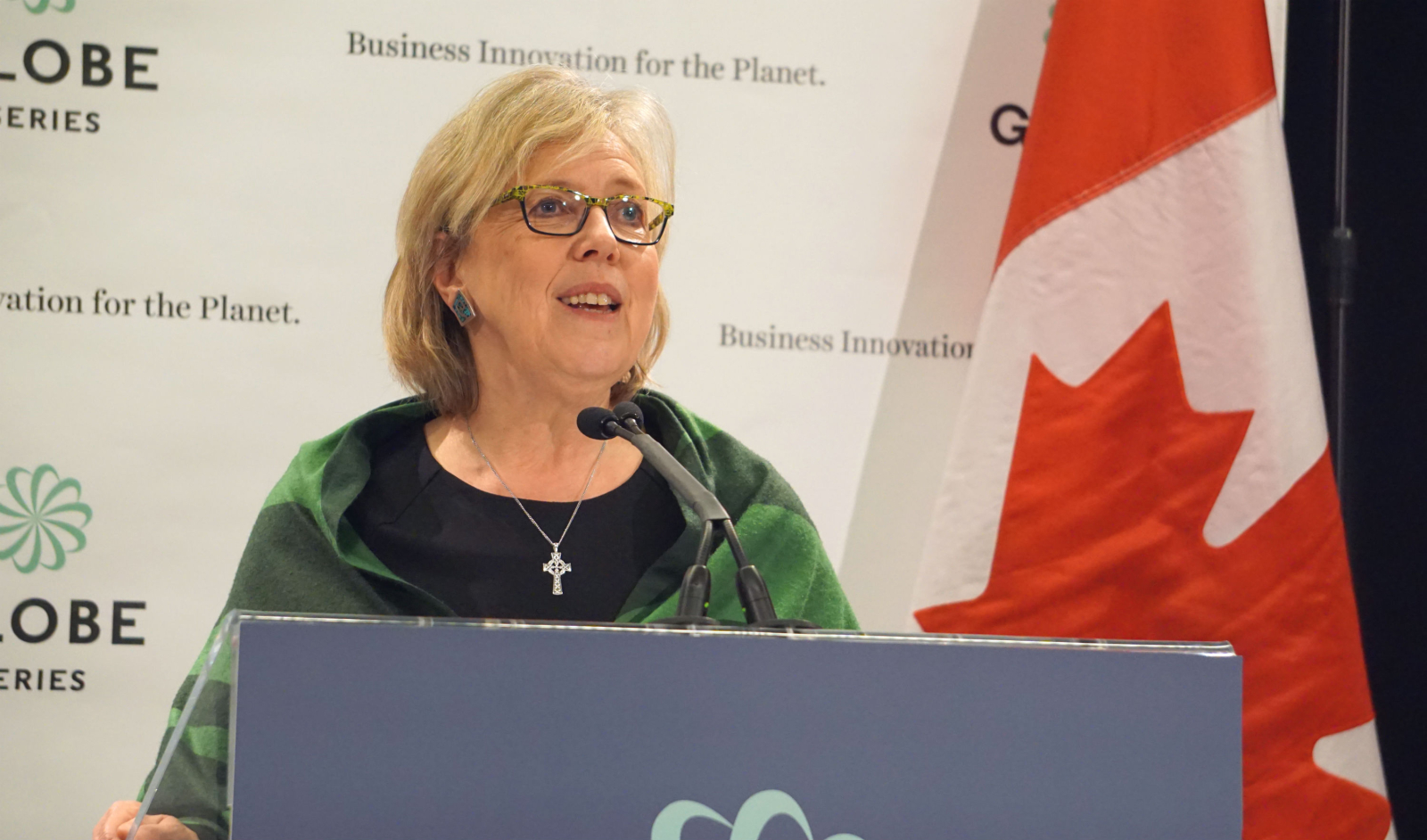 Green Party leader Elizabeth May calls on the federal Liberals to meet their climate action deadlines during the 2016 Globe Series in Vancouver, B.C. on Wed. March 2, 2016. Photo by Elizabeth McSheffrey.
Previous story
Next story

Speaking at the 2016 Globe Series in Vancouver, B.C., she added that the Kinder Morgan Trans Mountain expansion and Energy East pipeline proposals must not be approved or be considered an option for "funding" a greener future.

“We can’t be tying ourselves to bitumen and oilsands as an energy source for the future," she told reporters at the summit for sustainable business innovation.

"If you have an economic strategy for the oilsands that’s premised on high volumes of export on low-value product, you both ship jobs off-shore and drive up greenhouse gases. Those are inconsistent aims.”

While May appreciated Trudeau's appearance at the conference to begin with (he is the first prime minister attend so since Paul Martin in 2005), she called on the federal government to demonstrate bolder leadership on climate action.

As for its election promise, the deadline for coming up with a pan-Canadian framework on climate change — 90 days after the conclusion of COP21 in Paris — is March 12. It's time for the premiers to stop squabbling over their own economic interests, she said, and join in meaningful negotiations on carbon pricing.

"The premiers must now set aside narrow self-interest to endorse a new and more ambitious target for Canada," she explained. "Those renewed targets will pressure other countries to do more, and the global market will respond by increasingly betting on renewables and the future economy.”

Environment Minister Catherine McKenna recently announced that it would take another six months of consultations to come up with the framework, which is fine by May, as long as stronger greenhouse gas reduction targets come with it.

Even if all countries meet their below-two-degree global warming pledge negotiated in Paris, the United Nations has said that the planet would still experience an increase in global temperature ranging between 2.7 and 3.5 degrees Celsius.

"If we don’t have more aggressive targets soon in every country on Earth, we will be well past the danger zone and into a catastrophic range of climate impacts," she said, "potentially unstoppable, potentially runaway global warming.”

Canada's current targets — to reduce emissions to 30 per cent below 2005 levels by 2030 — were set by former Environment Minister Leona Aglukkaq in May 2015.

The NDP joined May in her call for bold government action to set ambitious, accountable emission reduction targets – with annual progress reports, a five-year review and accountability measures that are enshrined in law.

"Federal and provincial governments must agree to regulate polluting industries, put a price on carbon pollution, and ensure that Canada does its fair share to contribute to international efforts to combat climate change,” said NDP environment critic Nathan Cullen. “The federal government has both the ability and the responsibility to tackle this problem.

"Now we need to see if they have the will to follow through on their promises.”

All agreed that the "clock is ticking" for Trudeau to bring forth tangible action in his hefty set of environmental election promises, especially with the federal budget coming on March 22.

Though Trudeau announced more than $120 million in funding for municipal climate action and greener infrastructure this morning, May said if every investment dollar were tied to reducing greenhouse gas emissions, it would go a long way with the "heavy lifting" of emissions across the country.

Thirty per cent of Canada's emissions are in the transportation sector, she explained, and another 30 per cent come from "leaky buildings." These are weaknesses Canada can no longer afford, given the environmental legacy of the Harper government.

“For a decade, the previous federal government sabotaged work on Canada’s greenhouse gas emissions targets, and those targets sunk to the worst in the G7," she explained. What's leftover now, she added, is a "dispirited" civil service and "inertia in the system" when it comes to climate action.

Canadian citizens across all walks of life will play a vital role in putting the government's feet to the fire on climate commitments, she said, and encouraging the public to wake up from the slumber induced by the previous administration.

"What we really need is to recognize that Canadian citizens may have forgotten the tools of citizenship," she urged.

"You don’t give up, you push as hard as you can, and you make sure Justin Trudeau as prime minister, and Catherine McKenna, and Christy Clark, and absolutely everyone who has decision-making power knows that as citizens, we’re engaged and we will not take no for an answer.”