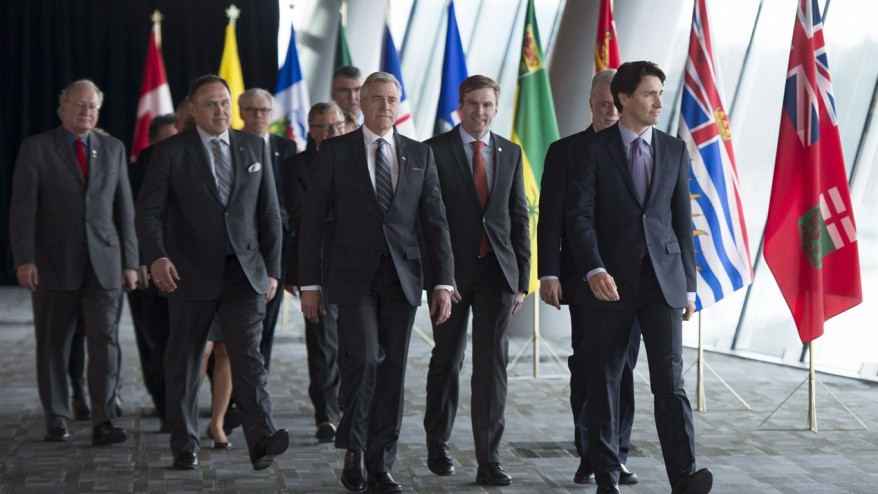 Photo by The Canadian Press/Jonathan Hayward
Previous story
Next story

Following this week’s meetings in Vancouver, we urge our federal, provincial and territorial leaders to consider the human health impacts of climate change as they continue to work towards a bold national climate plan.

Many health professionals consider climate change to be the greatest public health challenge of the 21st century. We want our leaders to know that many of the actions needed to slow climate change can improve human health, reduce chronic diseases, and cut health care costs right here at home.

In 2015, the International Panel on Climate Change provided strong evidence that climate change is happening, that hundreds of thousands of people are already being adversely affected by it, and that millions will be adversely affected by it over the coming decades unless we take aggressive and immediate action to dramatically reduce greenhouse gas emissions.

Motivated by their own recent experience of climate change impacts and by predictions for the 21st century, nearly 200 countries made commitments at the Paris Climate Conference in December 2015 to actions that would keep the average global temperature increase below 2°C (relative to pre-industrial times). Some countries, including Canada, offered to work toward goals that would keep temperatures below a 1.5°C increase.

To keep the temperature increase below 2°C, greenhouse gas emissions must be cut by 40 to 70% of 2010 levels by the year 2050. To keep it below 1.5°C, emissions must be reduced by 70 to 95% of 2010 levels by the year 2050. These goals will require a massive transformation in Canada’s economy and in the economies of countries around the world. The good news is that many of the changes needed in Canada can produce significant health benefits and health care savings.

Dr. Margaret Chan, Director General of the World Health Organization (WHO), identified the climate agreement sought in Paris as “the most important health agreement of the century“, and described it as “an opportunity to promote actions that can yield large and immediate health benefits, and reduce costs to health systems and communities.” For example, the phase- out of six coal-fired power plants in Alberta is expected to produce air pollution-related health benefits worth approximately $300 million per year or $3 billion over 10 years, while simultaneously cutting the province’s greenhouse gas emissions by 17%.

In 2011, WHO researchers concluded that significant health, health equity, and climate benefits could be realized by shifting a large percentage of people from private motorized vehicles to walking, cycling and public transit. They estimated that on a global scale, the transportation sector is responsible for approximately 5.8 million deaths per year: 3.2 million from physical inactivity; 1.3 million from vehicle-related collisions; and 1.3 million from outdoor air pollution.

They concluded that policies directed at shifting people to active modes of transportation would: reduce chronic diseases (such as type 2 diabetes), heart disease and cancers that are associated with physical inactivity; prevent traffic-related injuries and deaths; and reduce cardiovascular and respiratory disease from air pollution; while reducing greenhouse gas emissions in a cost-effective way.

In 2014, the Medical Officers of Health in the Greater Toronto and Hamilton Area (GTHA) estimated that a modest shift from vehicles to public transit (nearly 10%) and active transportation (5%) in the GTHA could prevent 338 premature deaths, 1000 cases of diabetes, and 90 hospital admissions for lung and heart conditions each year. These health benefits were valued at $2.2 billion per year.

The evidence is now incontrovertible; we need to act quickly and aggressively to slow climate change. But the actions needed to address global climate change can produce many local health and economic benefits for all Canadians. Our actions can help us to reduce air pollution and create new jobs. Together, we can create healthier communities that support active living and make services and jobs more accessible to all members of society. We can reduce chronic diseases and cut healthcare costs.

As a collective voice of health professionals, we call on our federal, provincial and territorial leaders to act with courage and conviction. Create a bold climate action plan that will transform our society, improve the health of Canadians, and pull us back from the brink of ecological disaster.