Trudeau: 'It's me sitting here as PM of Canada and not Stephen Harper' 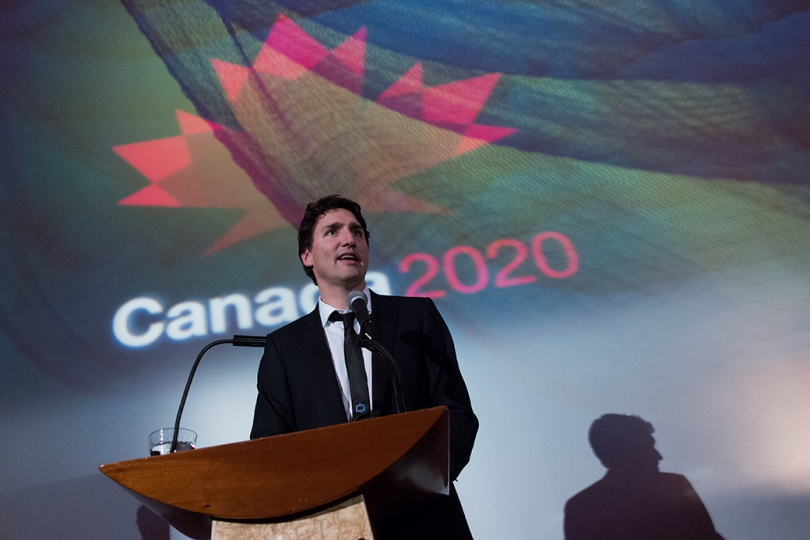 Justin Trudeau at a reception in Washington. Photo from Government of Canada
Previous story
Next story

In a lunch time question and answer session at the Centre for American Progress in Washington on Friday, Canadian Prime Minister Trudeau held the audience rapt as took questions on the economy, Canadian politics, women in politics and more.

Here are excepts from Trudeau's question and answer:

Trudeau on the middle class

"The core of the message that we put forward from the very beginning of not just the election, but for my run for the leadership of the Liberal Party, was a recognition….that’s there’s a wide swath of people in the middle of the income spectrum for whom the idea of progress…doesn’t seem to hold….

"What we’ve seen in the past 30 years is a flat-lining of median income for the middle class and that means people don’t feel like this idea of progress holds, that our kids would be better off than we would.

Trudeau on the Syrian refugees and the economy

"Therefore, highlighting for example, the 25,000 Syrian refugees we’re bringing over isn’t just about doing the right thing, helping the crisis overseas, of course. It is in part. It is also about strengthening our communities.

"Therefore with their hard work, with their delight at the opportunity…they’re going to boost our economy. Canadians got that."

Trudeau on Stephen Harper, the Conservatives and the politics of fear

Trudeau said attack ads and dirty tactics left the impression that it was the most efficient way of doing politics after a couple of election cycles. "I said we were not going to do any negative attacks. We would highlight and contrast various fundamental disagreements and call out our opponents on wrong-headed policy, but we wouldn’t get into character assassination or scare tactics or fear-mongering. And I got a lot of push-back from progressives….

"What I heard from Canadians across the country is we don’t like negative attacks, but they work."

Instead, Trudeau says he asked Canadians, "How would you like your politics to be in an ideal world? We’d like people to get along, be respectful. We’d like to see vociferous disagreements over issues done in a way that’s based on facts and different perspectives instead of cynical personal attacks.

He then spoke about the bill that took away the citizenship of convicted terrorists. "Suddenly we made citizenship conditional on good behaviour, on non-heinous behaviour."

Trudeau related how at one of the largest debates, Harper told the audience that Trudeau was willing to stand up and restore the citizenship of the one Canadian who under this law had his citizenship taken away. "He knew he had me on that. I’m actually standing there defending a Canadian stripped of his right as a terrorist to become once again a Canadian citizen. I stood there and I defended that principle.

"And that’s a perfect narrative for the politics of fear and aggression and yet it’s me sitting here as Prime Minister of Canada and not Stephen Harper.

"I’ve always look for opportunities to say something unpopular but right, as those moments that define any given leader."

Trudeau on women in Canadian politics

"We had an awful lot of work to do in 2014, 2013, 2012, to reach out and draw in strong women who would run for politics. There’s a couple of examples here. I had to pester Chrystia Freeland so many times.

Some of her first reactions were, 'Really, do you think I’d be any good?' Oh my God, if I asked a guy if he could come up and run for me, he’d say: 'Okay, do I have to wear a tie?'

"I have a 50-50 cabinet, but the Parliament of Canada is still way under where we need to be in terms of the proportion of women. There’s a lot more work to do. We’ll continue to work on that.

"It can't just be women who are feminists. We men need to be feminists too."

Trudeau told the crowd climate change presents a challenge, but at the same time offers the opportunity to innovate, the opportunity to develop solutions that folks around the world desperately need and he called it the "defining issue of our times.

"What we came together to agree on in Paris really does make a difference, the fact that everyone has accepted this is a priority, this is something we have to address. It’s vital for our species on our planet.

"How we keep moving needs to be continually to put pressure on.

"I have tremendous confidence in the capacity of human beings to innovate and solve problems and a certain degree of confidence in businesses ability to make a profit off of that. That’s the way we have to look at the challenge of climate change."