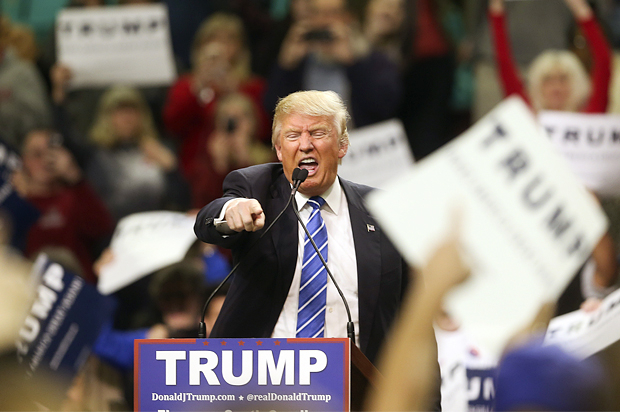 I don’t know about you, but I’m never going to be able to watch that old flick The Spirit of St. Louis again without thinking of Donald Trump and what he potentially means for Canada and Canadians.

You see, Lindbergh and Trump have a few instructive things in common: They’re both rich, white men turned cultural touchstones by a fawning, uncritical establishment press. Oh, and by the way, this pair of media-manufactured celebrities happen to be partial to fascists.

I know that drawing a line from Mussolini to Trump gets some excitable members of the punditocrisy into a tizzy. The usual suspects working at the usual newspapers wail that such historical comparisons are irresponsible and demeaning to, you know, real fascists. Well, I’m going to defer to historian Fedja Buric, who made this persuasive case in Salon recently showing how Trump and Mussolini share all sorts of disturbing rhetorical and authoritarian traits.

If Buric’s elegant essay doesn’t convince you of Trump’s iron-clad fascist bona fides, perhaps this picture of an elderly Trump supporter displaying her loyalty for the Manhattan Mussolini – as my talented friend, Michael Harris dubbed him – with a stiff-arm salute, will. (Not surprisingly, she later denied being a Nazi.)

Her obscene gesture has little to do with anger, and everything to do with ignorance and fear of the other. Trump claims that he’s simply channeling, not stoking, the simmering alienation and frustrations of his legion of Mini-mes. This is, of course, a lie.

From the day he announced his candidacy, Trump – like every other cheap demagogue in a well-tailored suit or uniform – has, by design, stamped a star of hate on children, women and men who don’t look, think, and allegedly pray like him.

Trump – by his words and deeds – has also been responsible for the bullying, intimidation and violence endemic at his hate-filled rallies. He soon may discover, however, that once unleashed, these dark, unpredictable forces will be hard to contain.

Anyway, Trump’s odious modus operandi is the latest, and perhaps most blatant, incarnation of the “silent majority” trope the Republican Party has played with a lot of success since…forever.

Stephen Harper adopted what, I suppose, he evinced was a slightly more palatable version of this this racially-infused venom. The former prime minister and his ever faithful (and still unrepentant) disciples in and outside cabinet, took their malevolent brand of division and doubt about the loyalty of millions of their fellow Canadians for a long, enthusiastic test-drive during the last election campaign.

As we know, it was the final, desperate gambit of a government that wasn’t just circling the drain, but the toilet bowel. That said, we ought to remember that Harper, his loyal gang, and their malicious message won the support of 32 per cent of Canadian voters. Sobering.

Since Oct. 19, we’ve witnessed an unconvincing metamorphosis by those same Haperites… who now insist that all that nasty talk about niqabs, “barbaric” cultural practices and “Old-stock” Canadians has receded into the rear-view mirror.

Interim Conservative leader, Rona Ambrose and company, tell anyone with a microphone that they’re so allergic to Trump and what he represents politically and philosophically that they all practically carry an EpiPen around just in case they ever come into contact with him.

What a load of revisionist crock. Trump is not only harnessing, but exploiting the same ugly, nativist impulses that motivated Harper to set up a “snitch line” to encourage Canadians to inform on other Canadians for the same, petty, parochial interests at the expense of the national interest.

I suspect that for all the feigned outrage, more than a few Conservatives share Trump’s poisonous politics and are all-in when it comes to building walls between people and places, denying climate change, and rabidly championing the wonders of unfettered, “free-market” capitalism with a bumptious, pseudo “successful” businessman firmly at the helm.

And, on cue, here comes the latest media-propelled Tory saviour lecturing us with his trademark smugness, loudness and condescension. Sound familiar? Yes, it’s that other reality TV star who’s also convinced that he can run a country on the fumes of his incoherent bluster, Kevin O’Leary.

Recall that several weeks ago, O’Leary took centre stage at the Conservative’s annual version of a political hootenanny – The Manning Centre Conference in Ottawa. The bald blowhard was treated with the kind deference and respect befitting his status as a leading leadership candidate.

But like their Republican brethren, I’m convinced that Conservatives will ultimately realize – albeit reluctantly – that they’ve placed their faith and hopes in a false, flamboyant prophet who isn’t that interested in serving them or the country, but in using them and the country as pliable vehicles to satiate his all-consuming narcissism.

If they don’t, other Canadians will do it for them by delivering an unequivocal thrashing to O’Leary at the ballot box.

It’s the kind of blunt comeuppance Donald Trump is headed for in November – whether he sees it coming or not.

Videos show Trump goading his fans to "rough up" protesters