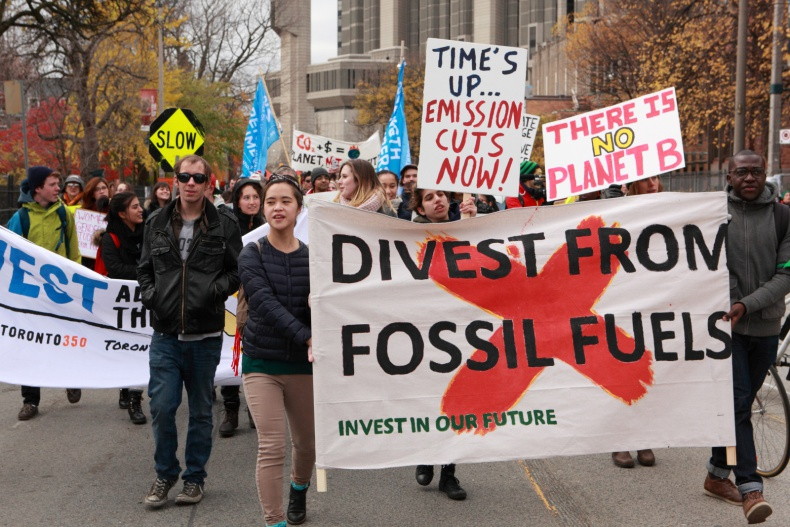 The University of Toronto has rejected recommendations to sell off its fossil fuel investments, but says it will consider environmental, social and governance factors in making investment decisions.

The decision was immediately labelled cowardly by the group that has been pushing the university to divest from companies that contribute to climate change.

"We have the support of hundreds of faculty, alumni and students," said Amanda Harvey−Sanchez of 350Toronto.org, which began the campaign with a petition in support of divestment. "For president Gertler to go against his own committee is shameful and appalling."

In a report released Wednesday, university president Meric Gertler said not investing in fossil fuels would have limited impact because such firms only account for one−quarter of Canada’s greenhouse gas emissions.

Gertler said it would be more effective for the institution to work with other organizations to increase transparency about carbon use and encourage companies to emit less.

He said the university will come up with principles to "enable consideration" of such factors in future investments, look for ways to use its shareholder influence to reduce climate risk and report annually on those efforts.

Outside consultants and the university’s own financial managers have been asked to come up with a set of responsible investing guidelines by July 1, said Gertler.

"We will be looking for investments that offer our beneficiaries the best possible return, understanding we have to appraise that long−term investment performance in a way that takes into account things like climate−related risk."

It will also consider signing on to the Carbon Disclosure Project as well as the Montreal Carbon Pledge, in which investors disclose the carbon footprint of their investments, said Gertler.

"These are all substantive measures that will actually have more impact on addressing the challenge of climate change than divesting will."

A divestment report by a panel of university faculty members presented to Gertler last December went much farther.

It suggested the university should drop investments in companies that knowingly distribute misinformation about climate change or get more than 10 per cent of their revenue from unconventional fossil fuels or "aggressive" extraction, such as open−pit oilsands mines, Arctic drilling or thermal coal.

Gertler said none those types of investments are likely to be approved once the university gets its new guidelines.

"We’ll probably end up in a pretty similar place (to the December recommendations)."

Harvey−Sanchez, a student at the university, said Gertler’s response to those recommendations assumes "we can reward people for doing a bad thing well.

"It’s cowardly because he has the support of the entire U of T community for divestment. His decision is going against all of that support and it’s a political move."

She said the issue isn’t dead.

"We have a lot of options and we’ll have to look at them all carefully."

The University of Toronto Asset Management Corp. had $7.4 billion under management at the end of 2014.

Universities across Canada have been weighing whether to dump their holdings in fossil fuel companies.

Concordia University in Montreal became what is believed to be the first Canadian university to adopt a partial divestment policy in December 2014, although that measure only applied to a $5−million fund — a fraction of the school’s $130−million endowment.

"University presidents across the country talk about this frequently," said Gertler.