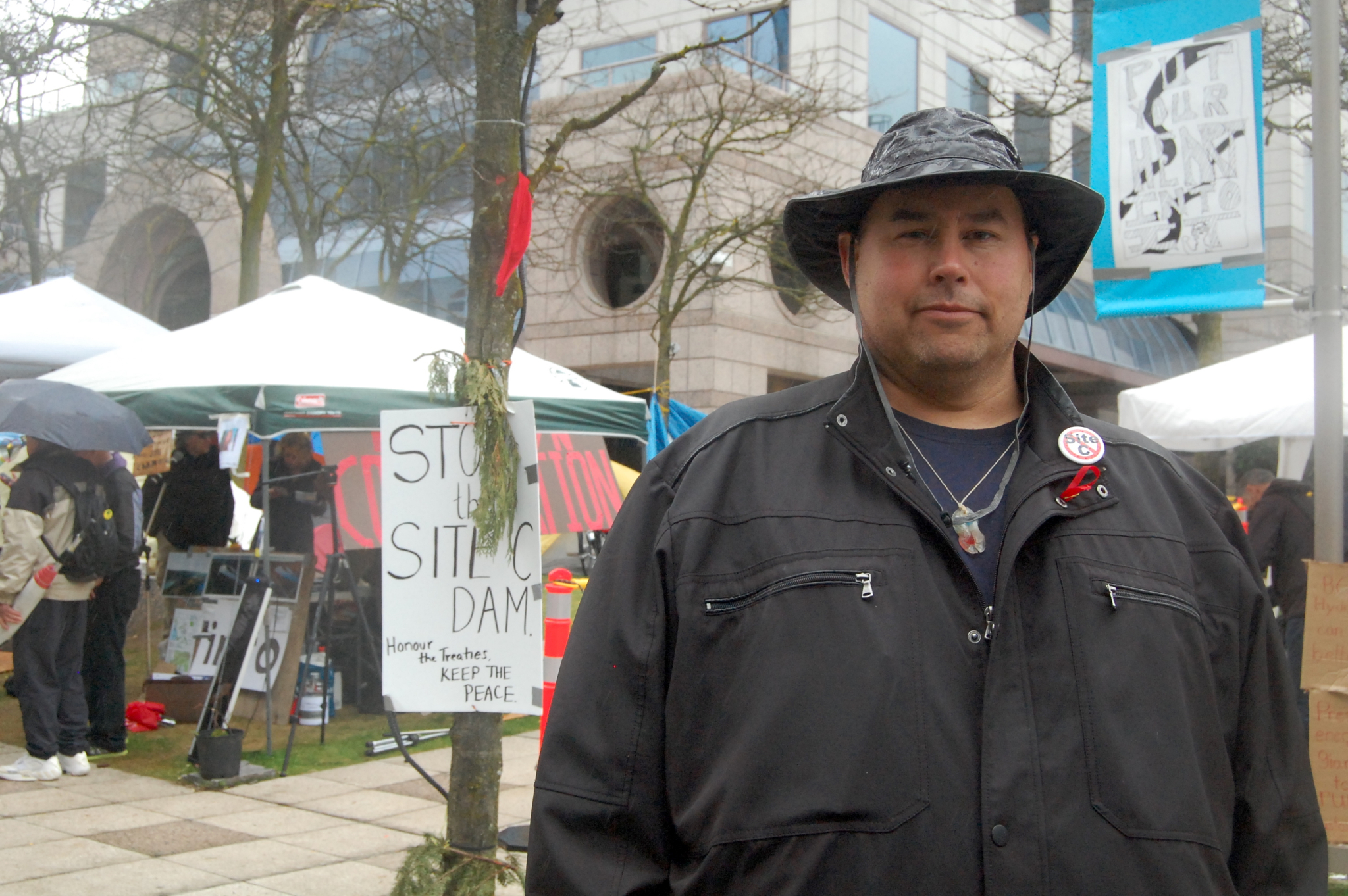 Under pouring rain, Chiefs from the West Moberly First Nations and the Prophet River First Nation — joined by Grand Chief Stewart Phillip from the Union of B.C. Indian Chiefs — met a dozen campers protesting the Site C dam project. They had traveled all the way from the Peace Valley to join protesters camped front of the BC Hydro office in downtown Vancouver.

“Site C is a stupid idea,” said Chief Roland Willson, from West Moberly. “We have geothermal capacity, here in B.C., that they don’t want to look at. We have wind energy here. We are not opposed to the development of the energy—we are opposed to the destruction of the Valley.”

Construction of the $8.8-billion "clean energy" dam began last summer on the Peace River of northeastern B.C., a river that flows right through the heart of Treaty 8 Territory belonging to the Doig River, Halfway River, Prophet River and West Moberly First Nations. Upon completion, BC Hydro claims it will produce enough power to light up roughly 450,000 B.C. homes per year. But critics contest whether that power is necessary for B.C., and say the dam's reservoir is expected to flood more than 100 kilometres of river valley bottoms along the Peace River and its tributaries.

Chiefs and farmers like Sage Birley —who has become a spokesperson for the Site C protesters—argued that the project was going to disrupt their livelihood and threaten B.C.’s food security by flooding highly productive agricultural land.

Willson also expressed concern that the dam would destroy "one of the longest freshwater fish migrations in all of the province."

Protesters also slammed B.C. Premier Christy Clark, who said she wanted to push the Site C project "past the point of no return." Indigenous leaders argued their treaty rights have been violated by decades of development on their territory.

When he finished addressing some 30 attendees and reporters, Willson approached Kristin Henry, the 24-year-old who held a hunger strike for 19 days to protest Site C. In a teary-eyed moment, he offered some traditional gifts that his community sent her.

Welcomed back into the camp with drumming and a round of applause, Henry said that she felt inspired by seeing the community coming together to oppose the “unnecessary and destructive project.” But she also said that more needs to be done, noting that she realized that most Canadians are unaware of the Site C project itself.

Henry lamented that, despite her own expectations, neither the B.C. Liberals nor the federal government acknowledged her protest and hunger strike.

“Neither of those parties has come forward and acknowledge that I put my health at risk to stop this. I’d like to say shame on them for that," she said. "I hope this will help expose the fact that this government is not working for the people of B.C., but for their own self interest.”

Still, she said that if it’d come to that, she would do it all over again. “Look at all the people that are here today. I absolutely believe that we have to stop this project.”

“I think it’s very fitting that we’re in front of this building that represents the sponsor, together with the Clark government, of a project that represents world class stupidity,” he said. 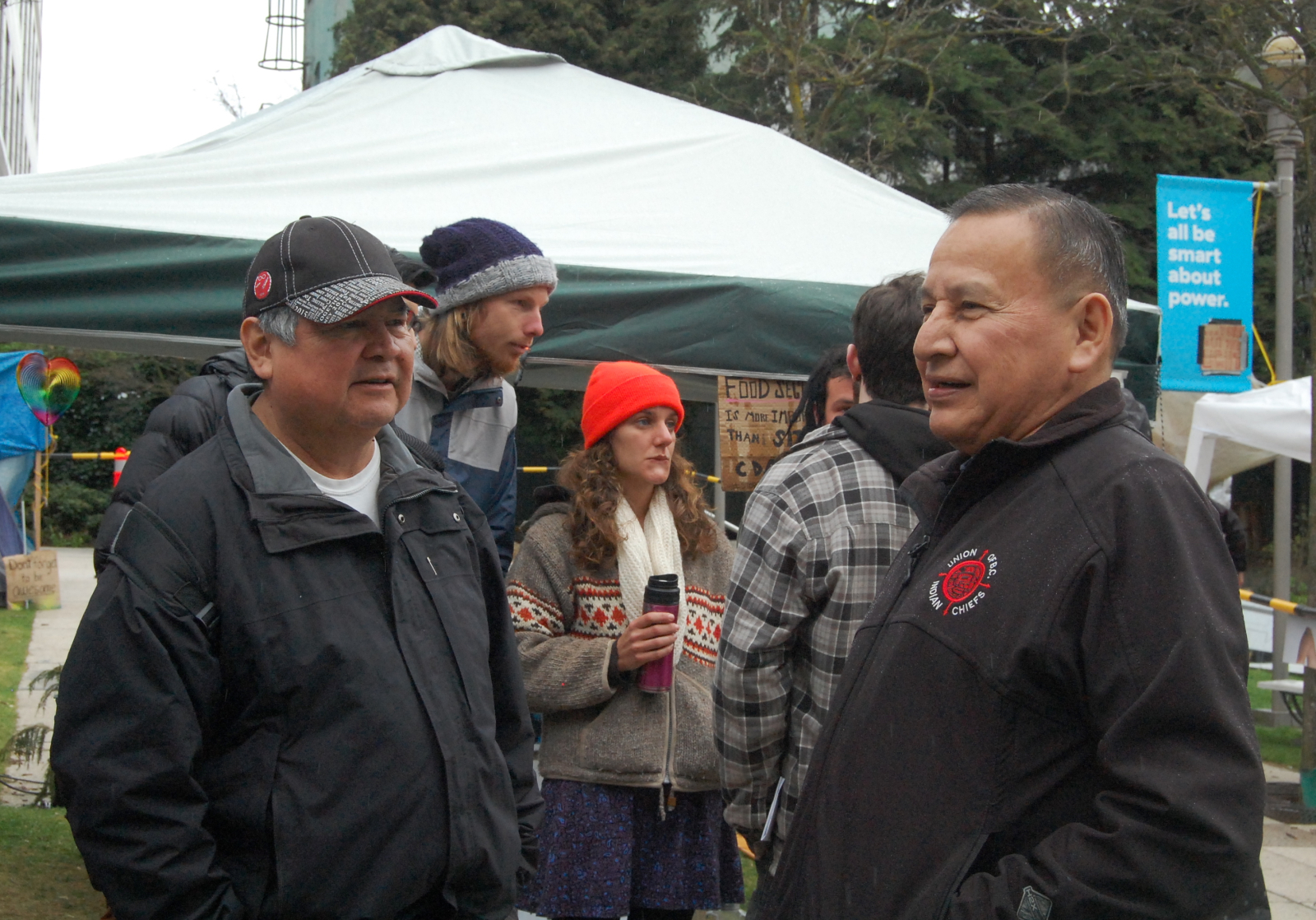 Phillip repeated that he would continue fighting against a project that “has been proven time and again, there’s not market [for], there’s no buyer for the power.”

Environmentalist David Suzuki was also expected to be in attendance, but a last-minute commitment didn’t allowed him to be at the press conference. Campers said he stopped there to show his support earlier in the morning.

In spite of this opposition, the Community Relations Manager for Site C, David Conway, stated in an email that out of the "13 Aboriginal groups that BC Hydro is engaged with, only two First Nations remain opposed the project in court (West Moberly and Prophet River)."

Conway also wanted to make clear that the camp outside the Dunsmuir office was not organized by First Nations and that it has become a health and safety concern. "We are working closely with health and safety officials like the local fire department and the health authority. We are presently reviewing our options for the next steps that we may or may not take," he wrote.