"The sky is gonna be blue!" Conservatives win big majority in Manitoba election 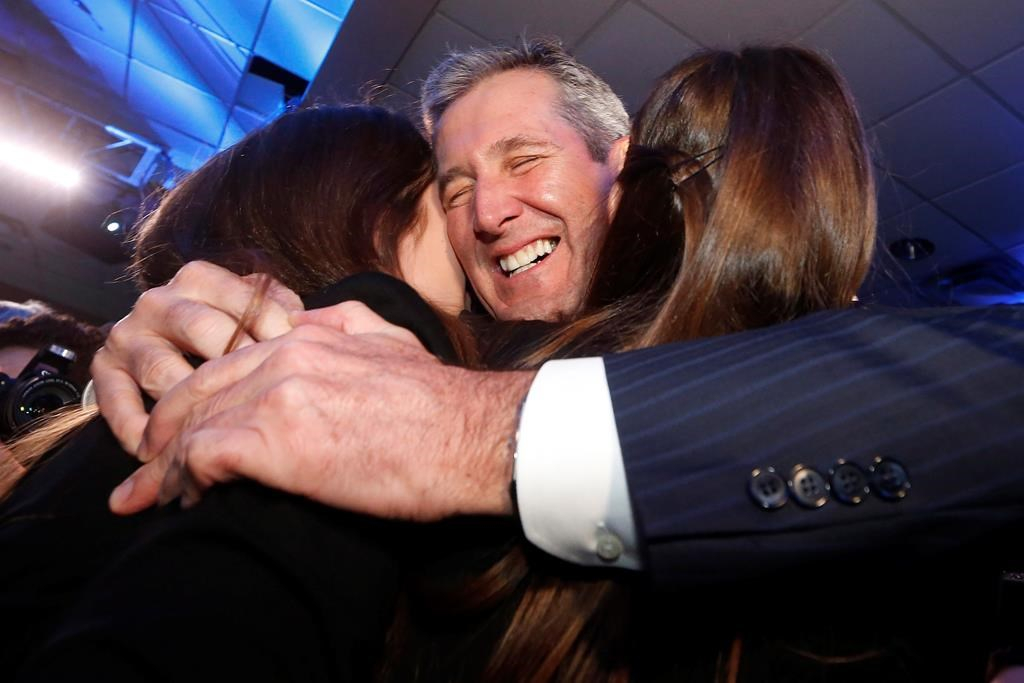 Brian Pallister's Progressive Conservatives will form the next Manitoba government. Photo by The Canadian Press
Previous story
Next story

An orange dynasty stretching back to the 1990s fell Tuesday as Manitoba voters painted the political landscape a hue of Tory blue.

Brian Pallister's Progressive Conservatives routed Premier Greg Selinger and the New Democrats to put an end to 16 years of the NDP in power.

Pallister, a former Canadian Alliance MP, joins Premier Brad Wall of Saskatchewan as another voice of conservatism on the Prairies.

The Tories won at least 40 of the 57 seats in the legislature and were gunning for more as late results poured in.

"What a great night!" Pallister told cheering and clapping supporters in his victory speech.

"The only thing better than tonight in Manitoba is tomorrow.

"And tomorrow all Manitobans are going to walk out into a beautiful spring morning and they're going to look up and the sky is gonna be blue," he said as the crowd roared.

"We'll be a government that finds and eliminates the waste, the overlap, the duplication, and returns the savings to Manitobans in the form of lower taxes and better services," he said.

"We're going to do this because we believe that our economy grows better when there's more money on the kitchen table and a little less on the cabinet table."

The New Democrats not only failed to win a fifth consecutive majority, they were heading for their worst showing since 1988. The party's percentage of the popular vote fell to the mid-20s, about half of what it was in the last election in 2011.

The Tory popular vote was over 50 per cent.

The result marked the demise of Selinger as leader, although he will stay on as member of the legislature for St. Boniface.

"Tonight, as we examine the results, I will and I have already, talked to the president of the party and I've offered my resignation," Selinger told subdued party supporters.

"I do take responsibility for the election outcome. I will recommend they appoint an interim leader after tonight as we go forward."

The defeat is another blow to the party in Canada. The federal New Democrats were reduced to third-party status in October's federal election and Alberta Premier Rachel Notley is the last NDP premier in the country.

Campaign director Jeremy Read said the party was "fighting a number of dynamics."

"I think we were fighting a lot of (desire for) change," he said. "We went into this campaign knowing that we were running from behind."

Steven Fletcher, a former federal Conservative MP, will be one of the new PC members of the legislature after winning in Assiniboia.

Bokhari lost to NDPer Wab Kinew, a former rapper and broadcaster who had to defend himself during the campaign for misogynistic and homophobic language in his rap lyrics.

Bokhari wouldn't say whether she planned to stay on as leader.

"Not a conversation to have ... right now. I want to celebrate with my candidates who have done a really good job," Bokhari said.

"My candidates did everything that they could and when Manitobans look at the kind of people that we brought together ... this party hasn't seen that in decades."

She suggested money and resources played a role in the party's showing.

The PCs swept the southern rural seats, their traditional base of support, and won by capturing a majority of seats in the traditional NDP stronghold of Winnipeg.

Pallister rode to victory on a promise to build infrastructure, increase trade and reverse a sales tax hike that many believe doomed Selinger and his NDP when they broke a promise and introduced it in 2013.

The decision prompted a number of Selinger's cabinet ministers to revolt and forced a leadership contest last year that he barely survived.

During the campaign, Pallister hammered on the broken promise of the tax hike, which took the levy to eight per cent from seven per cent.

Political scientist Karine Levasseur said the tax hike decision sent Selinger into a spiral from which there was no recovery.

"That decision has haunted Greg Selinger and has produced public opinion poll after poll where support has been declining, and with that declining support, that then sparked a very deep internal leadership crisis within the New Democratic Party," said Levasseur with the University of Manitoba.

"They kind of sat back almost. They kept repeating the mantra about broken trust and broken promises for sure, but they kind of let the NDP unravel themselves."

— With files from Rob Drinkwater in Edmonton.