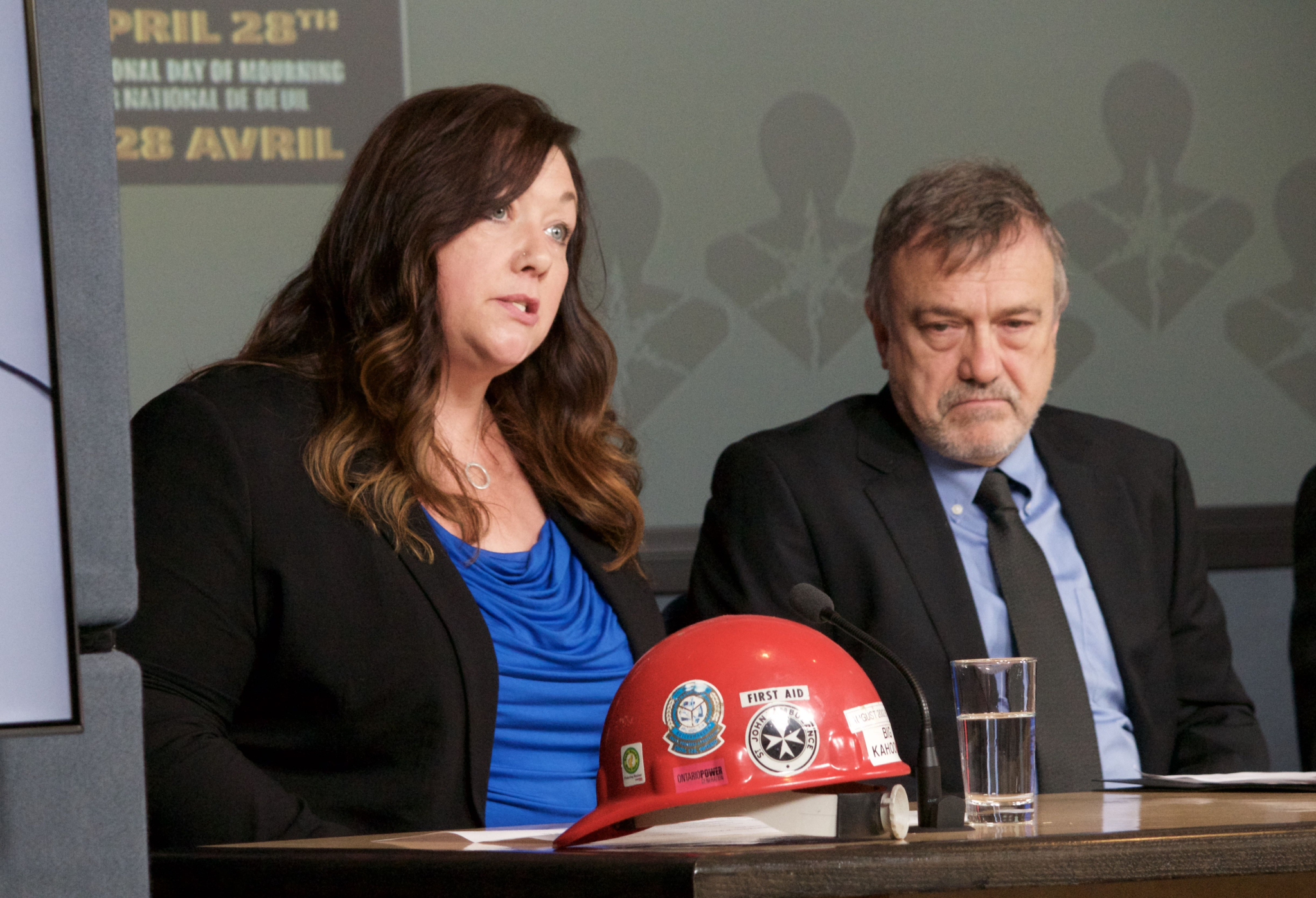 Michelle Côté, daughter of a boilermaker diagnosed with mesothelioma, and Paul Demers from Cancer Care Ontario call for the government to implement an asbestos ban. Photo courtesy of the Canadian Labour Congress
Previous story
Next story

Trade unions and affected family members say it's long past time to ban all asbestos products in Canada, calling them the country's number one workplace killer.

A tearful Michelle Côté, whose boiler maker father was diagnosed with deadly, asbestos-caused mesothelioma in 2014, told an Ottawa news conference that no one deserves to die this way.

According to studies funded by the Canadian Cancer Society, more than 2,000 Canadians die from asbestos exposure every year, with 580 new cases of incurable mesothelioma diagnosed in 2014.

Canada closed its last asbestos mine in Quebec five years ago but continues to import millions of dollars of asbestos products, including brake pads for vehicles and pipes used in building construction, with imports nearly doubling between 2011 and 2015.

Hassan Yussuff of the Canadian Labour Congress says he's been in discussion with the Liberal government and is imploring it to quickly pass legislation banning the import and use of materials containing asbestos.

Yussuff says every product currently used containing asbestos is easily replaceable, with many of the safer alternatives — such as ceramic brake pads — manufactured right in Canada.

"There is no reason for delay," Yussuff said Friday.

He was flanked at the news conference by several people with personal experience of asbestos tragedies.

"My dad, although still alive, is lost," Côté said of her 71-year-old father Clem, "the big kahuna" with a zest for life who now finds it difficult to speak.

"Dad knows we can't help those men and women who have already been exposed," said Michelle Côté. "This plea is something he, and we, can do to stop future generations from facing the same death sentence."

For every case of mesothelioma, there four cases of other lung cancers caused by asbestos fibres but less easily identified, said Paul Demers, the director of the occupational cancer research centre at Cancer Ontario.

Asbestos was recognized as a workplace carcinogen in the 1950s and has been banned in several Nordic countries for three decades, but remains legal for use in Canada.

"We can't undo the sins of the past but we can take steps to prevent cancer in the future," said the researcher.

Renée Guay, whose father died a "gruesome death" from mesothelioma in 2011 and whose uncle has since been diagnosed with the disease, said that in her current work she sees contractors who fail to shower after cutting asbestos pipes, potentially carrying deadly fibres home to their families.

"Why is it we let this well-known, proven killer walk free?" Guay said of asbestos. "Who are we really protecting, because certainly it's not our fellow citizens."