LNG and public safety: the elephant on the water 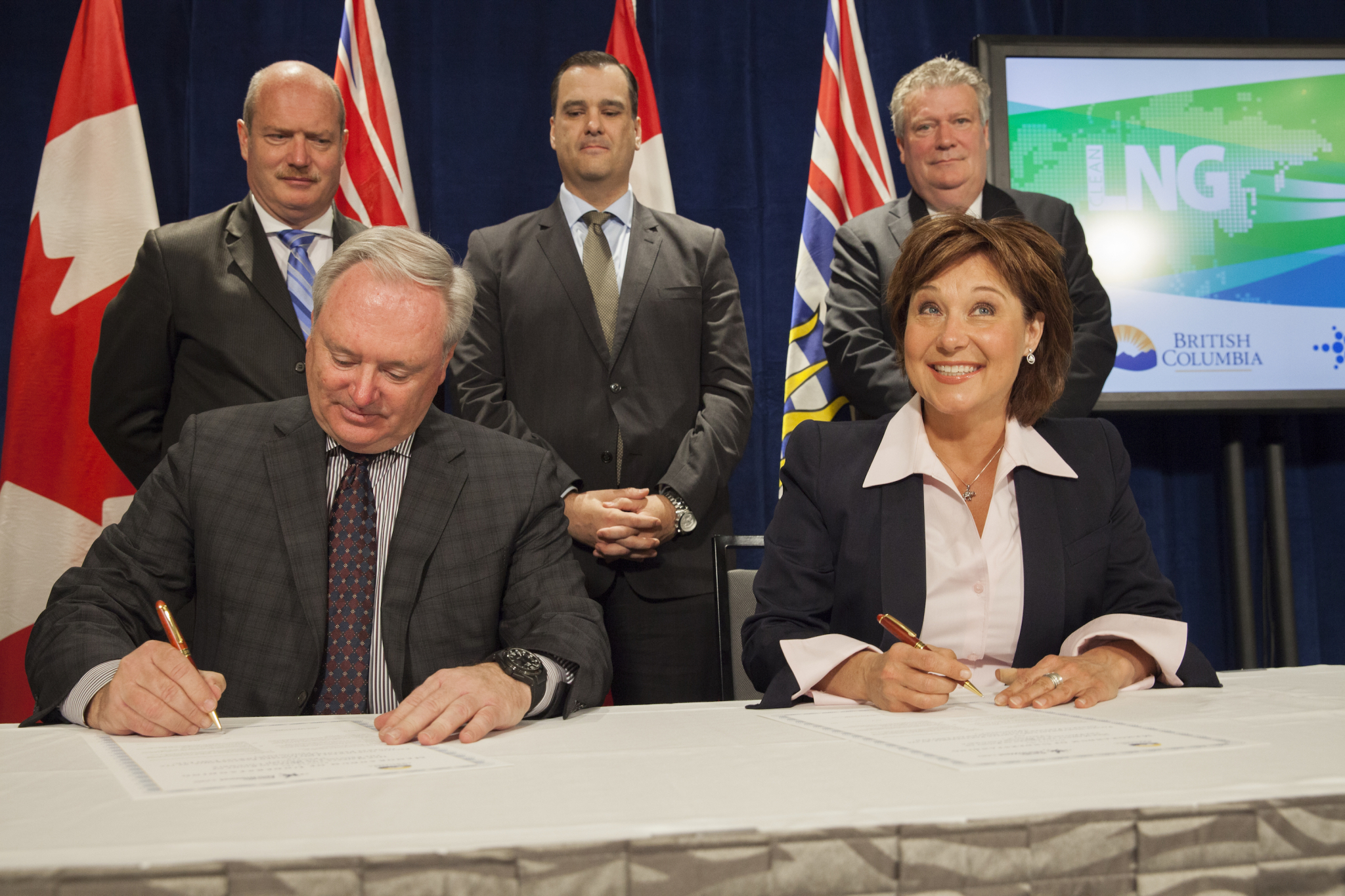 As the debate on British Columbia’s proposed liquefied natural gas (LNG) industry enters its fourth year, it's well past time we asked a critical question: Is it safe for people to live close to LNG vessels and terminals?

You could say that the LNG industry wrote its own handbook about the topic.

In 1997, the Society of International Gas Tanker and Terminal Operators (SIGTTO) published Site Selection and Design for LNG Ports and Jetties. The document listed clear guidelines:

Anyone familiar with the marine approaches to Howe Sound, Prince Rupert, and Kitimat will be aware that to propose marine transport of LNG from terminals in those locations violates all of the SIGTTO standards cited above.

Nonetheless, in March 2016 the federal government approved the construction of Woodfibre LNG near Squamish. If built, this facility would generate 40 round-trip transits of LNG vessels in Howe Sound each year. Six LNG facilities are proposed for Kitimat at the head of Douglas Channel. One has been approved for construction. Because of Douglas Channel’s marine hazards, critics of the Northern Gateway bitumen pipeline derided the channel’s proposed use by oil tankers. Yet up to 460 round-trip LNG vessel transits could take place in Douglas Channel each year. Four large terrestrial LNG export facilities are proposed for the Prince Rupert area, along with three, smaller floating facilities. None is yet approved for construction. At full build-out, the large plants could generate 796 round-trip transits of LNG vessels, the smaller facilities 208, almost tripling the current industrial vessel traffic in a confined waterway.

The likelihood of a tank breach – accidental or intentional – is low. It has not happened since LNG marine transport began in 1959. But LNG itself as a substance, through its manufacturing process and in storage, possesses innate hazards. LNG terminals and storage facilities have suffered catastrophic explosions. As more vessels are added to LNG fleets, making more voyages into confined and treacherous waters like on BC’s coast, the chances of at least an accidental breach in a marine setting will increase. World events of the past two decades indicate that the risk of an intentional breach cannot be dismissed. An attitude of “It won’t happen because it hasn’t happened” is not acceptable when addressing these risks.

What would occur if LNG were to escape from a carrier’s storage tank? In 2004 and 2008, the US Department of Energy commissioned Sandia National Laboratories to find out. Sandia reported that an instantaneous fireball would not be likely. A more probable scenario is a “cold explosion” known as a rapid phase transition. The temperature of LNG is -161.5°C. Escaping from a vessel, LNG would release a blast as it froze the ocean surface, then evaporate as it warmed and absorbed water vapour, to form a low, heavier-than-air cloud that would drift outward. The larger the breach, the larger the cloud.

Outright ignition of regasified LNG would require it to mix with air in a range of 5 percent to 15 percent LNG. If this cloud of LNG vapour were to spread from a vessel or a terminal with optimal conditions for ignition, an aerial fireball would be possible. That ignition would typically “backtrack” from the spark to the source of the cloud. But with an onshore wind a fiery blanket could disperse over land. Sandia’s research suggested that typical aerial dispersal distances from a small breach would be 3050 m from a near-shore source, and 4600 m from an offshore source.

LNG burns at more than 500°C. Sandia’s reports described three zones of hazard around an LNG vessel should a breach occur with ignition. Within 500 metres of the vessel, death to all living things on the water, surfacing from the water, in the air, or on adjacent land would be likely. This could result from shrapnel, incineration, freezing or from suffocation. Between 500 metres and 1.6 km from the vessel, these threats lessen but are still critical. Second-degree burns to exposed human flesh would typically result from 30 seconds of exposure. Structural fires, grass fires, and forest fires would be ignited. Effects would lessen moving from 1.6 km out to 3.5 km, beyond which the hazard is considered negligible. In the US, these hazard zones have been embodied in regulations governing LNG facility location.

All human settlement near Prince Rupert is within the hazard zones. More than 13,000 residents are at risk, along with up to 3,000 people who may be visiting at any given time. More than 60,000 passengers depart the port on ferries and water taxis each year in these hazard zones. Many of the islands in Howe Sound lie within the hazard zones, as do the communities of Horseshoe Bay and Lions Bay, and portions of the Sea to Sky Highway. Chiefly due to unresolved safety concerns, most municipal governments in the Howe Sound region have passed motions opposing Woodfibre LNG. The Union of British Columbia Municipalities passed a resolution in 2008 opposing LNG tanker traffic in surrounding waters.

When disaster strikes, the public expects that emergency infrastructure will be safe from massive harm, and that a back-up system exists to patch things together if key infrastructure is damaged or destroyed. This is not the case at Prince Rupert. LNG vessels transiting to the proposed WCC LNG facility on Tuck Inlet would ply the length of the Prince Rupert Harbour shipping lane and its approaches. The Coast Guard base, City Hall and its Emergency Operations Centre, the Fire Hall and its 911 call centre, the Prince Rupert Port Authority with its Port Security Operations Centre and Emergency Operations Centre, the BC Ferries and Alaska Marine Highway terminals, the Via Rail terminal, the Seal Cove Coast Guard Search and Rescue helicopter base and BC Ambulance medevac base, and the RCMP detachment all lie within 1.6 km of that shipping lane. Prince Rupert Regional Hospital and the BC Ambulance station are on the 1.6 km line. And to flaunt brazen disregard for the SIGTTO guidelines, LNG vessels approaching WCC LNG would pass other LNG vessels berthed for loading at the proposed Aurora LNG facility on Digby Island, at a point where the navigable waterway is scarcely 1 km wide. They would also pass LNG vessels docked at New Times LNG and Orca LNG on the Prince Rupert waterfront.

Boston is the only US city with an LNG facility. The Everett terminal in Boston Harbour imports LNG – meaning that vessels enter the harbour loaded and leave empty – the opposite to what is proposed for BC’s coast. Typically, only one LNG vessel every eight days makes the trip to Everett LNG, but the stir that each passage creates is instructive in terms of appraising risk. When four days from port, an LNG vessel approaching Boston must contact the US Coast Guard with a manifest and crew list. The Coast Guard runs checks on the crew. When 12 miles from port, the Coast Guard boards the vessel to inspect it and to begin surveillance to ensure that all other vessels keep 500 yards away. When five miles out, a pilot boards the vessel and four tugboats are engaged. Passage into port is only permitted in daylight and with clear visibility. Five armed boats, two from the Coast Guard and one each from three police agencies, escort the LNG vessel into harbour. Law enforcement officers patrol all piers and jetties along the route, with a helicopter or two dedicated to observe from above. Bridge traffic over the harbour is halted as the vessel makes way beneath. Marinas are shuttered and guarded for 20 minutes before and after each transit. The security cost? About 80,000 USD per transit. The economic cost? Unknown.

The Port of St. John, New Brunswick, is home to Canaport LNG, Canada’s only LNG import facility. Transport Canada has implemented Boston-like measures for LNG transits: mandatory security screening of LNG vessel crews; a “marine safety zone” of 0.5 nautical miles (926 m) around any LNG vessel; no anchoring within 1.5 nautical miles of an LNG vessel; and no overtaking of LNG vessels when they are underway in the harbour. When an LNG vessel is offloading at Canaport LNG, a 620 m radius from the centre of the terminal is off-limits to all marine traffic except tugs and service craft employed with that vessel. Given the large “sail areas” of empty LNG vessels, the harbour master may consider other “special provisions” to accommodate them, or may order them to leave port when they are empty and it is windy.

In 2006 and 2013, the Canadian government rejected plans for LNG vessel transits through Head Harbour Passage and Passamaquoddy Bay, New Brunswick, to a proposed LNG facility in Maine. Describing those Canadian waters as “a unique and highly productive marine ecosystem,” the 2013 letter from the Canadian ambassador to the US Federal Energy Regulatory Commission summarized concerns related to “the environmental, navigational, and safety risks as well as the adverse economic consequences…”. Which begs the question: What is so different about the setting for LNG vessel traffic proposed for BC?

Although piloting will be required, Transport Canada has not announced its plans for LNG carriers on BC’s coast. According to its website, the Prince Rupert Port Authority is considering implementing “safe transit zones” and “traffic separation patterns to define specific routes for specific types of vessels.” In other ports, separations of as much as an hour are required between LNG carriers and other watercraft.

What if, as is likely, setbacks and separations are mandated around LNG vessels approaching BC’s coast? With the possibility of three LNG vessels a day entering and three a day exiting the port of Prince Rupert, what would be the effect on BC Ferries, the Alaska Marine Highway, the airport ferry, the Metllakatla ferry, water taxis, commercial fishing (especially salmon and herring openings), tour operators, cruise ships, and recreational boating and fishing?

Although the public raised the issue during “consultation,” why weren’t restrictions to marine traffic spelled out in the various project descriptions? Was it because industry expected a backlash over public safety and the inconvenience? If disaster were to occur, what recourse would the public have? Who in government has investigated the insurance requirements for LNG carriers and ports? Each LNG vessel is typically its own limited liability corporation, flying a flag of convenience; its owners beyond the reach of law should calamity occur.

It's up to industry and government to do their due diligence and ensure that the public is not put in harm's way by these projects.

This is an updated version of a piece that originally ran in Common Sense Canadian.