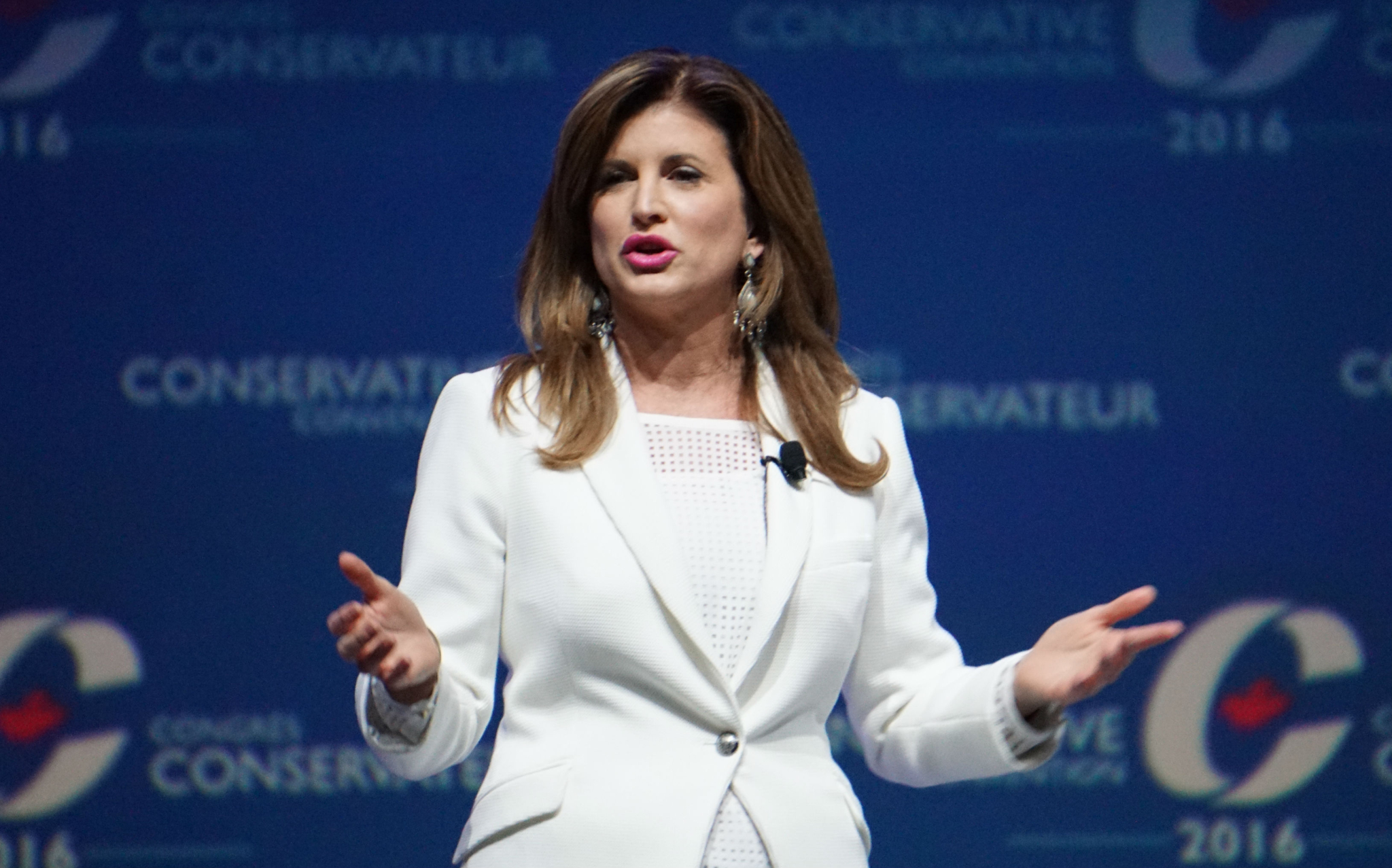 Rona Ambrose, Interim leader of the Conservative Party, gives glowing praise to Stephen Harper as he bids politics farewell at the Conservative Convention in Vancouver on Thurs. May 26, 2016. Photo by Elizabeth McSheffrey.
Previous story
Next story

In the day following former prime minister Stephen Harper's farewell speech from politics, delegates at the 2016 Conservative convention in Vancouver — while saddened by his departure — were ultimately satisfied with his short but focused presentation.

The recently retired Tory leader said more or less what he was expected to, offering little comment on the direction of party moving forward and no prescriptive policy suggestions. It was appropriate for an outgoing leader, said Ryan Tenta, a delegate from the B.C. riding of Cloverdale-Langley City.

"It’s up to the new interim and upcoming leader, and grassroots convention to set that tone," he told National Observer on Friday. “Harper is retiring, so it’s kind of his place to say, ‘Good job guys.’”

But as the MP for Calgary-Heritage exited the stage, turning his back on the crowd for what may be the last time as a politician, many Tories were left scratching their heads about what direction the party will take moving forward. Should they re-brand entirely, or simply refresh?

According to voters young and old, a little bit of both may be required as the Tories pick up the pieces from the 2015 election.

“Friends, the theme of our convention this year is looking forward," said interim leader of the Conservative Party Rona Ambrose during the festivities on Thursday. "Together this weekend we’re going to celebrate, we’re going to generate new ideas, and welcome proud Conservatives to be part of our families’ future.”

So far, new ideas already seem to be taking root within the party — not only is this the most media-friendly Conservative convention in its history, but a stage for some more progressive policy-making as well. On Friday morning, for example, 66 per cent of voting delegates supported a change to the Tory constitution that would broaden its definition of 'marriage' to include same-sex unions.

According to Tenta, gay marriage, climate change, poverty and youth involvement are only a few of the topics that must form a more "broadly palatable" policy plate for the Conservatives as they strive to appeal to a wider range of voters.

“What you want to happen and what is electable are two different things," he explained. "What’s the point in being so far right if you’ll never get elected? Principles don’t mean anything if you can’t apply them.”

Economics and taxes must still come first, he added, but the party must focus on offering a more balanced package that communicates its strengths to the public.

According to Bruce Anderson, an esteemed political pundit and former panelist for CBC's At Issue, the Conservatives made a mistake in the last election when they focused on branding Justin Trudeau as the enemy, rather than focusing on the strength of their policies. Instead of listening to public feedback that favoured the Liberal leader, the party sent a message: "No no no, you really don’t understand, he really is self-absorbed.”

In order to move past this, Anderson argued, and target a broad range of voters rather than the smallest number of steadfast Conservatives required to win the election, it must do a better job of packaging its policies.

"Mr. Harper created a party that was more bombastic and pugilistic than it needed to be to succeed," he explained. "People talk about tone, but really it’s about whether your orientation is to grow your franchise or reassure yourselves that everyone who is outside your tent doesn’t belong."

It's not an argument for more public opinion polling, he added, but for a communications package that includes less taxpayer-funded advertising that tells voters how they should feel.

Even Conservative youth delegates Mildred Bolanos, 18, and Alissa Furet, 17, of Montreal — both of whom support traditional Tory values — admit that the party needs a bit of a communications makeover. While the Conservatives should not work with Prime Minister Justin Trudeau necessarily, they explained, they should not work against him as they have in the past.

Taking a leaf out of Trudeau's book

"It’s true, bashing the other people doesn't make us look better, it just makes us look mean," said Furet. "The Conservative policies are already strong and we just need to make it so everyone hears them. The Liberals have this way of getting their ideas everywhere, so that’s what we need to be able to implement.”

Neither Furet or Bolanos approved of Trudeau's recent push-up stunt as marketing tactic, but both agreed that his strategy of doing weird, random things that appeal to young people has worked in his favour. On the topic of youth, they also believe the Conservative Party — which doesn't have a youth wing — should create an association that involves young people without alienating them from older party members.

In order to keep up in a rapidly changing political climate, added Tenta, the Conservatives must choose carefully when they elect a new leader next year. So far, the candidates — MP for Wellington-Halton Hills Michael Chong, MP for Simcoe-Grey Kellie Leitch, and Beauce MP Maxime Bernier — represent a broad range of views within the political right.

The latter for example, is widely recognized as the most libertarian-leaning Conservative caucus member.

"You need a charismatic leader who can compete with Trudeau on that level, because he won on being young and fresh," said Tenta. "The party has a reputation of being old, white and crotchety, so I think you need to engage the youth, and move a little to the left."

Tories vow to improve on 2015 election

In fact, the party's reputation was one of the most popular topics at a question and answer session with its executive director, Dustin van Vught, designed to examine and build upon mistakes made during last year's election. One delegate said persistent negative advertising in particular ended up "killing" campaigners, and should be heavily scrutinized if the tactic is to be repeated.

Van Vught admitted the party messed up and "has some work to do" in developing a new strategy moving forward. The reasoning behind the Tory attack he ads, he explained, was that they had worked in previous elections. Moving forward, he said staff at local electoral district associations will receive more robust media training.

"There are a lot of things on the plate and a lot of people who are very aware of it," he explained. "We're going to have to be talking to people to figure out the best way going forward."

Delegates also expressed their desire to expand the Conservatives' reach in months to come, so as not to alienate youth or ethnic voters, for example. One Muslim delegate — in tears — shamed the party for making her feel unwanted in her own country with bitter a campaign against the niqab and the introduction of the Barbaric Cultural Practices Act.

"For the first time I felt like I didn't belong here and this is my country," Uruzurum Heer of Brampton-South, Ont. scolded van Vught. "It's unfair to my people."

She implored the Conservatives to think about exclusion carefully in the years building up to the 2019 election and left the session before it was over.

Van Vught didn't apologize, but said in order to prosper going forward, the party must have a "very large tent that includes everybody."

Tangible changes already in the works for the party include a newsletter pilot program in Saskatchewan to increase public engagement, an online supporter program to generate online discussion, a revitalization of its membership renewal program, and addition of the word 'dear' before the names of subscribers it sends communications to in an effort to be more courteous.

While the Conservative leadership election vote isn't until May 2017, this weekend, the party will elect a new National Council and vote on 66 policy resolutions, and 85 constitutional amendments. These changes will play a large role in how the party fulfills its role as official opposition in the months to come, and eventually, how it campaigns in the 2019 federal election.