By Elizabeth McSheffrey | News, Politics | May 26th 2016
#29 of 32 articles from the Special Report: Assessing Stephen Harper
Fund this Report 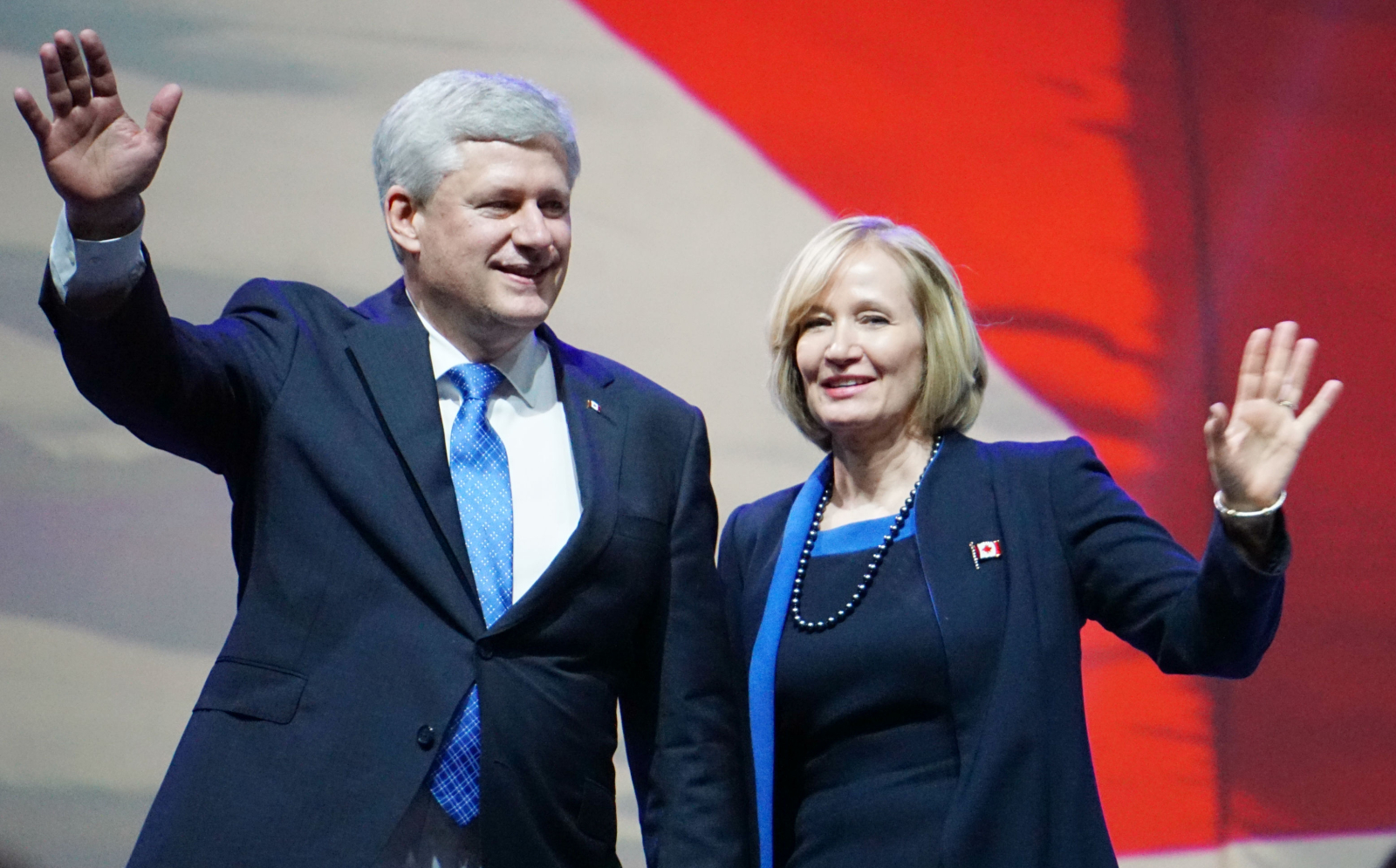 Former Prime Minister Stephen Harper and his wife Laureen bid the public farewell at the Conservative Convention opening ceremony in Vancouver on Thurs. May 26, 2016. Photo by Elizabeth McSheffrey.
Previous story
Next story

His exit from politics was as dramatic as his entrance. The famed, blood-pumping introduction to AC/DC's 'Thunderstruck' pounded speakers at the Conservative Convention in Vancouver, B.C. where former Prime Minister Stephen Harper made his first public address (see here for the full transcript) since the federal election in October last year.

The Tory MP for Calgary-Heritage — typically stoic in his presentation style — couldn't help but crack a smile. In fact, he waved, gave his signature 'thumbs up,' and beamed with pride during what will likely be his last speech as an elected official.

"We have a proud record, but the past is no place to linger," Harper told an audience of thousands on Thursday evening, handing off the torch to the future Conservative leader, who will be elected in 2017. "Now is the time to look forward. Our party's journey is only beginning."

His words were greeted by adoring fans and constituents, many of whom whooped, whistled, applauded, and rallied around cries of, "Harper! Harper! Harper!" The Conservative leader, who governed Canada for more than nine years, received a standing ovation.

He was poised, energetic, and almost appeared to be glistening in the bright blue lights of the Conservative stage.

Harper began his short address by thanking his constituents and supporters over the years, including Conservative staff and volunteers. He applauded in particular the work of the party's money masters, who ensured that despite suffering defeat to Liberal leader Justin Trudeau, the Tories remain in the strongest financial shape of Canada's major parties.

Without everyone's hard work, he said, his government could never have delivered Canadians the lowest taxes in more than 50 years, support for hard-working families, and record investments in infrastructure all while balancing the federal budget. He touched on a wide range of topics, including Canadian and Conservative unity and a "remarkable era of success" not seen by a longstanding Tory government in decades.

The same passion and enthusiasm will be required, he added, in order to seal victory in the next federal election.

"In 2019, perhaps more than we understand even now, our country will need a strong, united Conservative party ready to govern," said the ex-PM, "a party driven by hope, by hard work and by higher purpose that Canada can be and must always be the best country in the world."

Yet his speech, to no one's surprise, did not address his upcoming departure from the world of politics or what he plans to do next. Harper made a sly remark about enjoying his time "off centre stage," and left the audience with nothing but his confidence that they would make him proud in the years to come.

Times are changing, as they always have

Harper was known for running a tight and secretive government. Even when he resigned as Conservative leader on election night, no one saw or captured any images of him announcing his decision to step down from politics in his concession speech, as decided instead to allow his party to share the news of his departure through a press release.

But in a media package prepared for this weekend's party gathering, the Conservatives indicated it may chart a new course:

"This convention's theme is 'look forward,' and we can think of no better way to look forward than by making this our most open convention in party history," it said.

The cunning politician — who historically helped merge the Canadian Alliance with the Progressive Conservatives in 2003 — was Canada's 22nd prime minister and a major building block of today's Conservative Party. He touted this milestone during his speech as an example of the change the party has endured, and signalled that more changes will come:

"In the new Conservative Party of Canada, we broke with the past, broke with the failed systems of both legacy parties, by giving the people who are responsible for raising the money, the primary responsibility of managing the money," he explained. “This allowed us to move away from corporate money, from union money, from big money, and also yes — to significantly reduce taxpayer subsidies, and finally create a genuine, grassroots-based fundraising system.”

Harper is expected to resign as MP before the fall after more than 14 years in federal politics, and whether you were a fan of his policies or not, in the days since his defeat, his leadership has drawn praise from other esteemed politicians and Conservatives far and wide.

Perhaps the most glowing reviews of the evening came from Rona Ambrose, Interim Leader of the Conservative Party. She not only offered particularly strong praise for Harper's wife, Laureen, who has been a champion of volunteerism, veterans, animals, and Canadian wilderness for the last 10 years, but example after example of how the ex-PM has made Canadians proud both at home and on the international stage.

"Under Prime Minister Harper, clear principles guided our foreign policies," she said to applause. "We didn't just go along to get along — our principles were never for sale at the United Nations."

She cited his Universal Child Care Benefit, the introduction to the Victims Bill of Rights, and the Maternal and Newborn and Child Health Initiative, and touted Harper's courage in sending a direct message to Russian President Vladimir Putin to "get out" of the Ukraine in 2014. She complimented him for his strong show of support for Israel.

And her sentiments were widely echoed by delegates at the convention, all of whom had fond parting words for the outgoing Tory leader. In the hours leading up to his final speech, long-time Conservative voters Richard Wakefield of the Lambdon-Kent-Middlesez riding in Ontario and William Bird of Winnipeg-Central both agreed Harper was among the best prime ministers Canada has ever had.

“The fact that the [political] left demonized the man proves he was one of the best prime ministers we’ve ever had,” Wakefield told National Observer.

Speaking about the Tories moving forward, he admitted that in a Canada currently swept by 'Trudeaumania,' rebranding some of Harper's policies may be the best way to keep them intact. He disputed however, the notion that Conservatives across the country feel divided by the leader's legacy or somehow led astray.

“I don’t see that here," he said, looking around a hall of blue-clad delegates. "I see a bunch of people who are coming through that door who are glad to be here, and who want to push the Conservative movement forward.”

Cleaning up the media mess after Harper

Former Conservative MP Wai Young, who lost her seat in Vancouver-South to Defence Minister Harjit Sajjan, also rejected the widespread misconception that the October election was "devastating" for the party, and took the opportunity to thank the former prime minister for being an "outstanding leader" through tough financial times.

Young, now running for a coveted seat on the Conservatives' National Council, also shed some light on how the Tories can avoid a repeat of the media mess that took place leading up to the federal vote.

“I think in the next three years we need to be stronger with our message," she explained. "As a government we had so many accomplishments that didn’t seem to resonate because people didn’t seem to hear about them."

Suzanne Oel, a Tory delegate from the blue Calgary-Foothills riding, similarly encouraged the media and the public do their part when it comes to constructive, objective scrutiny. No party leader exits a position of power "smelling like roses," she said, and for his part — Harper was a "class act."

Moving forward, she said Team Canada needs to work together across all party lines, regardless of one's stance on the former prime minister of more than nine years.

“It's about getting on top of those issues that are so incredible we all need to work together to solve," she told National Observer. "So we [as Conservatives] might find we’re supporting our current government, finding out what we can do to back them up and how we can be really good at complaining about stuff we want done better.”

As the Official Opposition, the Tories have certainly complained loudly so far, holding the Liberals to account on topics like the C-14 assisted dying bill, protecting vulnerable salmon stocks, and the Trans-Pacific Partnership. In extreme opposition to this fierce resonance, their former leader is expected to fade quietly into private life over the coming year.

Sources recently told CBC that he has turned down multiple job offers from U.S. companies, including private equity giant KKR.

While Harper has been intentionally secretive about his plans post-politics, a second CBC report recently offered clues as to what the former Conservative leader may do with the rest of his career.

According to documents filed with Innovation, Science and Economic Development Canada, he has created his own corporation called, "Harper & Associates Consulting Inc." The paperwork was submitted in December 2015, and stars Harper as director along with former PMO staffers Ray Novak (closely implicated in Senator Mike Duffy's recent expense scandal) and Jeremy Hunt.

The former Tory leader also reportedly has a book in the works, involving “reflections on maybe which way the country should go, without getting highly political or partisan,” according to Ron Wood, a former political staffer and journalist who had lunch with Harper a few weeks ago.

This year's Conservative Convention represents the first policy assembly the party has held without holding power in more than decade and will involve more than 3,000 delegates, observers and officials. Over the next two days, delegates will consider 85 proposed constitutional amendments on how the party governs itself and 66 policy resolutions.

On Saturday, the party will will elect its new National Council. Keep checking National Observer for coverage of the event.