By Elizabeth McSheffrey | News, Politics | May 27th 2016
#30 of 32 articles from the Special Report: Assessing Stephen Harper 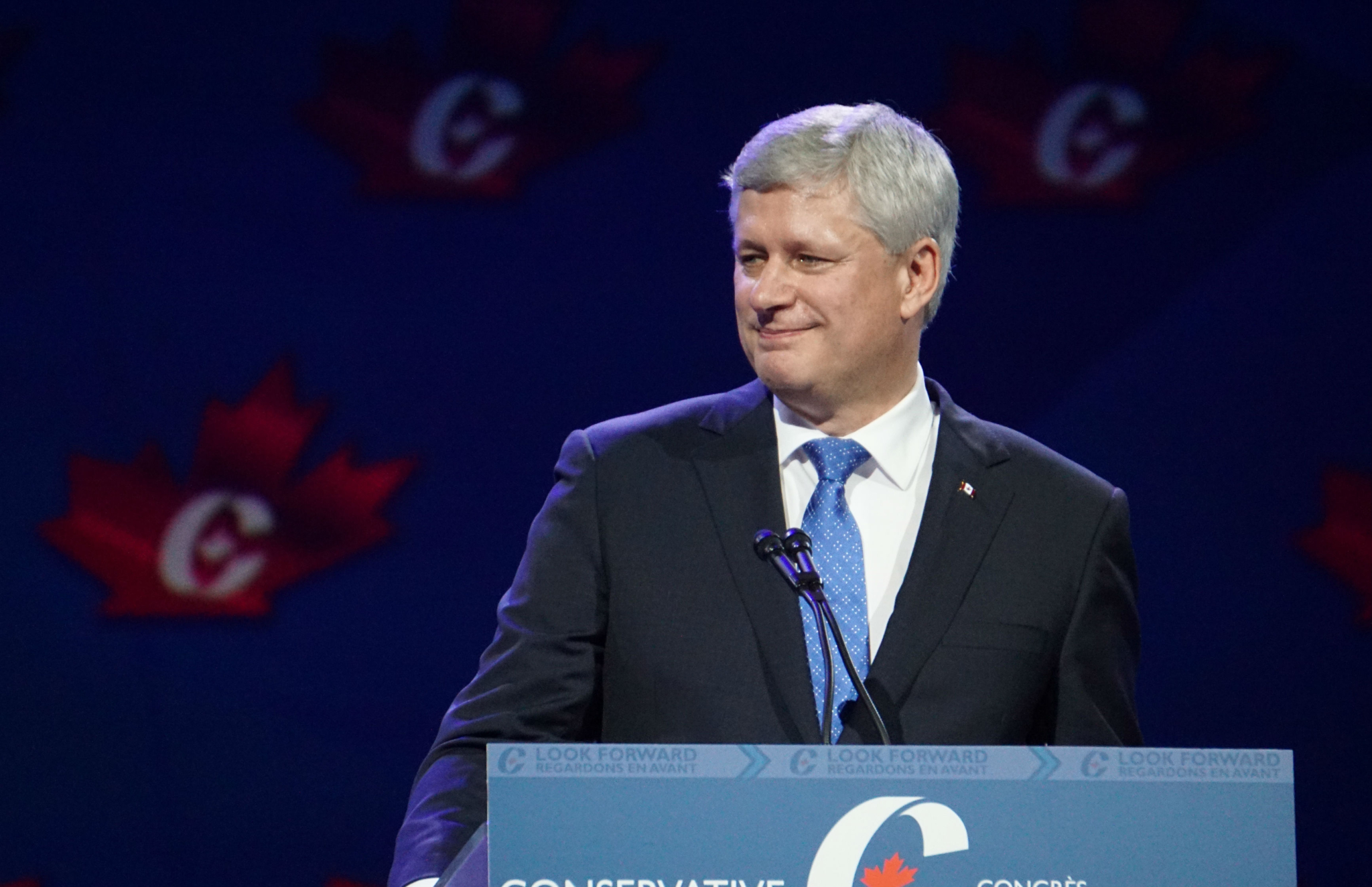 Former prime minister Stephen Harper cracks a rare smile during his farewell speech at the Conservative Convention in Vancouver, B.C. on Thurs. May 26, 2016. Photo by Elizabeth McSheffrey.
Previous story
Next story

It was a bittersweet goodbye for former prime minister Stephen Harper.

He took to the stage in Vancouver, B.C. on Thursday evening for a final farewell in the months before his formal resignation from politics. But needless to say, in a ceremony that included heavy bass, pop music, and cheeky swag, the ex-Conservative leader went out like a blazing comet.

His comments at 2016 Conservative Convention represent both the first time he has spoken publicly since the 2015 election, and the last time he will likely do so as an elected official. In no particular order, here’s what you missed from historic address:

After a touching slideshow detailing the former Conservative leader’s political accomplishments, Harper made an unprecedentedly high-octane entrance to his farewell speech to the wild guitar strings of AC/DC.

There's no denying the ex-prime minister wrapped up his political career in style as he entered and exited the Conservative Convention to the sound of 'Thunderstruck' in Vancouver, B.C. on Thurs. May 26, 2016. Video by Elizabeth McSheffrey.

An entirely surprising and dramatic performance by costumed Chinese dancers, who took to the stage at first accompanied by a traditional drum song, and wrapped up with their own personalized version of South Korean pop star Psy’s smash hit, Gangnam Style.

Interim leader of the Conservative Party Rona Ambrose couldn’t say enough good things about Harper and his wife Laureen, who has long been a champion of volunteerism, animals, and veterans. She applauded the former prime minister’s legacy policies, including the Universal Child Care Benefit, an introduction to the Victims Bill of Rights, and the Maternal and Newborn and Child Health Initiative.

She also touted Harper's courage in sending a direct message to Russian President Vladimir Putin to "get out" of the Ukraine in 2014, his unwavering stance on terror, and his strong show of support for Israel.

A brief endorsement from the B.C. deputy premier

Deputy Premier of British Columbia Rich Coleman — also minister of natural gas development and the minister responsible for housing — brought greetings from Premier Christy Clark to the Conservative Convention on Thursday evening. A personal fan of the ex-Conservative leader, he thanked Harper for his service before the final speech:

“As an admirer of yours, personally from me — thank you from the bottom of my heart and thank you on behalf of all the people of British Columbia for your significant commitment to the future of Canada, which I think you will have, and also what you have given us in service as our prime minister for the last decade or more.”

The wife of the prime minister distributed the prestigious Tory Maple Leaf Awards, which recognize the outstanding contributions of party supporters and staff in preparing for and winning election campaigns.

The first recipient of the evening was from Fort McMurray, Alta., a city recently scorched by raging wildfires that have resulted in catastrophic damage and mass evacuations. The entire audience took a moment to thank and remember those bravely put their lives on the line to subdue the flames, and all who have supported relief efforts.

From socks to sweats, from do-it-yourself elbowgate buttons to pot-promoting ‘Diefen-baker’ t-shirts, the swag at the 2016 Conservative Convention did not disappoint.

Lastly, one hell of a final speech from Stephen Harper

Despite the Conservatives' election loss, the crowd was left chanting "Harper! Harper!" and drowning out the former PM's last words with applause and cheers. See here for a partial transcript of his comments in English.