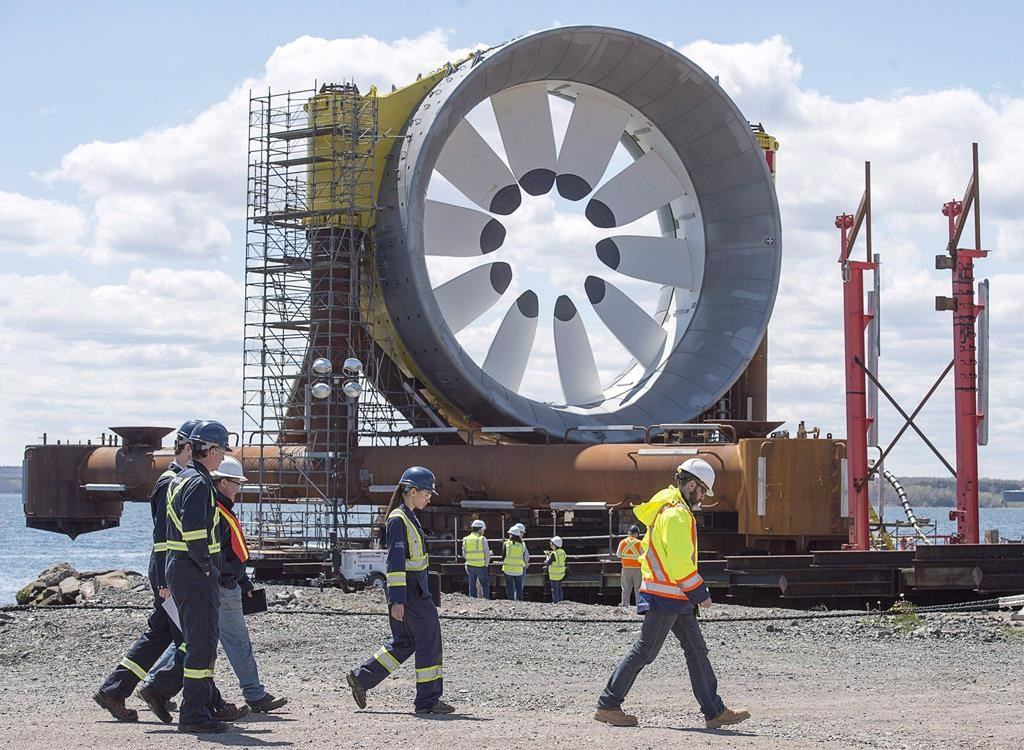 They flank the bay that is home to the highest and strongest tides in the world, but for hundreds of years Nova Scotia and New Brunswick have struggled to channel the awesome might of the Bay of Fundy into tidal power.

Aspiring entrepreneurs have tried everything from mill wheels in the 1600s to turbines in the 2000s, only to have their hopes dashed and devices casually battered to smithereens by the water's crushing force.

There has been limited success. In 1984, a form of hydroelectric dam — called a barrage — was built at Annapolis Royal, N.S. The 20-megawatt plant is one of only three tidal power plants in the world.

However, the next generation of projects is set to launch and onlookers say it's time for the tide to turn.

"It's happening in Europe and it's happening here at the same time in the Bay of Fundy," said Stephen Dempsey, executive director of the Offshore Energy Research Association, in an interview.

He says engineers around the world are poised to learn from and overcome the obstacles revealed in 2009, after OpenHydro and Nova Scotia Power deployed a one-megawatt turbine in Minas Passage to capture the powerful instream flow of the tides.

The speed and power of the water was so massive during that pilot project that the 12 two-metre blades were snapped off the 400-tonne turbine which resembled a giant aircraft engine until the tides took their toll.

Matt Lumley of the Fundy Ocean Research Centre for Energy (FORCE) describes the flow of water entering Minas Passage — where the FORCE site is located — like someone tightening their fingers on the end of a garden hose.

"The coastline pinches in to about five kilometres across and the water speeds up, and you've got about 14 billion tonnes of water moving over five metres a second," he said.

In short, the currents would easily generate enough power for all of Atlantic Canada's needs, but are too monstrously strong to be tamed — at least, fingers crossed, until now.

Cape Sharp Tidal, a partnership of OpenHydro and Emera, is betting on two towering turbines that will be installed starting in June. The two-megawatt turbines are 16 metres in diameter and each weigh 1,000 tonnes.

Sarah Dawson, the project's community relations manager, says they're poised to capture the clean, renewable and regular source of energy as the tides come into the Bay of Fundy and back out twice a day.

She said the new turbines are much more robust version of the 2009 design that was so badly battered.

"The strength of the tides there required a re-engineering, which is why this one is bigger and heavier and we're confident it will withstand the tides," she said.

Once in place, the turbines will be connected to Nova Scotia's power grid, and are expected to provide enough electricity for about 1,000 homes.

Meanwhile, Black Rock Tidal Power Inc., is preparing to install its TRITON S40, which uses 40 smaller turbines, each about four metres in diameter and designed specifically to survive the forces in the Bay of Fundy.

DP Energy and Minas Energy also have rights to berths at the FORCE site and access to the underwater power cable.

While most of the development is happening on the Nova Scotia side of the bay, New Brunswick's minister of economic development is hoping his province can benefit as well.

Rick Doucet says the deep-water, ice-free port in Saint John is an ideal location for staging, construction and shipping of the equipment out to the sites.

He's announced that a tidal power summit will be held in Saint John on June 27 to discuss the state of the developing industry.

"We're talking about opportunities that are right on our doorstep," he said. "What can we do to make this industry grow?"

The rush towards growth doesn't sit well with some area fishermen who want all activity put on hold until they have assurances that marine life is safe, and that they won't be pushed off their fishing grounds.

"We've never been consulted on this," said Chris Hudson, president of the Bay of Fundy Inshore Fishermen's Association.

Hudson said fish stocks have been hurt by the tidal project in Annapolis Royal and he worries more damage will be done to halibut, herring and lobster breeding when turbines are installed in the bay.

He said the association has launched a petition and begun raising money in case a legal effort is needed to halt the deployment of the turbines.

"Fishermen have been using this bottom for 100 years or more, and then somebody comes into your backyard and says, 'Nope, sorry, you're done and we're going to do our thing now.' It makes me mad just thinking about it."

Lumley said FORCE and the developers are conducting studies to ensure the ecosystem is not harmed.

Meanwhile, he's also noting that the potential for this energy source has turned out to be more than once imagined.

He said initial estimates for the potential of the Minas Passage site put it at around 300 megawatts, about 10 per cent of Nova Scotia's peak electricity demand.

"But once we actually got into the bay and started to collect some field data...that number went up significantly to about 7,000 megawatts of power. That is equivalent roughly to all of the needs of Atlantic Canada or about three million homes," he said.

Ralph Lauren Heren Schoenen Zwart
Although you may want to buy a automobile these days, purchasing away from the great deal may mean that they don't possess a vehicle together with the characteristics you desire. You can always make them phone affiliated dealerships to determine if they have the car in the good deal, but don't audio desperate or they'll enhance the cost.

Overweight individuals not only want to eradicate themselves weight, they also want to get rid of it very quickly. This leads to more unsuccessful diets than whatever else, and that's a huge reason why all dieters should check out these pointers well before undertaking to enter into a diet regime, blindly. The better information and facts you may have, the better your probability of achievement grow to be.

Hgh Wachstumshormone Bestellen
Don't get resting supplements. You could feel as if the answer to your sleeping problems would have been a tablet to help you sleeping, but it's not! Sedatives along with other sleeping aids result in your muscle mass, in addition to your neck muscles, to relax. Peaceful tonsils muscle groups are even tougher to manipulate whilst resting and therefore are a hazard to the people that are suffering from obstructive sleep apnea.
Hgh Hormon
Have someone that can be there for you personally when the ache is serious. Using a helping fingers, whether they are going to do light-weight duties for yourself or helping you make it through the home without having trauma or excessive strain on your important joints, may be the best way to make sure that you will almost always be equipped to cope with arthritis with out adding an excessive amount of on yourself.
hgh injections for menopause
Start in the middle of the measures. Don't start with stating, "Hi there, I'm so-and-so" or you'll shed the audience instantly. If you intend to operate with all the bulls, commence the video whilst you're jogging! If one makes the audience perform a secondly get, they won't move on to the following video.
buy jintropin mexico