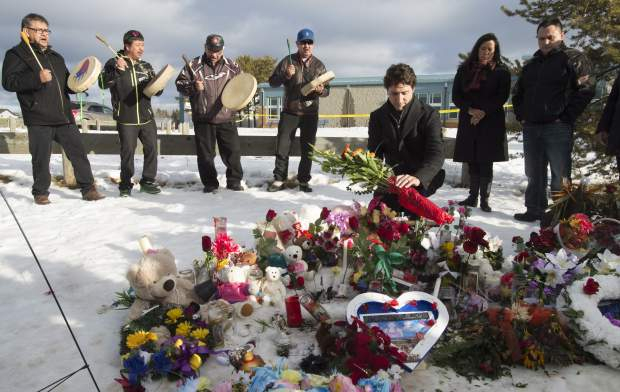 The member of Parliament for a northern Saskatchewan community where four people were killed in a shooting last winter says virtually no additional resources have been brought in to help people cope.

In January, two brothers were killed in a home before a teacher and a teacher’s aide were shot at the high school in La Loche. Seven others at the school were wounded.

A teenage boy, who can’t be named under the Youth Criminal Justice Act, is charged with first−degree murder and attempted murder.

He was to appear in court Monday. The Crown has served notice that it wants the accused teen sentenced as an adult if he’s convicted.

There’s a First Nation near La Loche and the community has a large aboriginal presence, but it is not on a reserve, so Health Canada says the province is responsible for providing mental−health support.

Jolibois says people in La Loche are showing signs of post−traumatic stress disorder. They’re frustrated with having to repeat their stories to mental−health workers who visit and residents would like permanent, consistent support instead.

"Even at the high school, the people coming in are not the same people who are coming in (every time), and so the youth or the staff or others may not necessarily feel confident now that they’ll get the assistance," said Jolibois.

Jolibois said young people and families seem to be struggling the most.

Health Canada said in an email to The Canadian Press that it continues to provide mental−health supports through the Meadow Lake Tribal Council to the nearby Clearwater River Dene Nation and is working with it to develop a long−term response and recovery plan following the shooting.

The Northern Lights School Division has six counsellors until the end of the term and says one will be available through the La Loche Friendship Centre over the summer.

The Saskatchewan Ministry of Health says there are two mental−health counsellors and two addictions workers that reside in and provide counselling services to La Loche. There are also three regional trauma counsellors who provide assistance and support when needed.

It says an additional community mental−health nurse is to start providing counselling services this month through the friendship centre.

The health region is also to hire a suicide prevention and community wellness worker who is to be based out of the centre.

Jolibois doesn’t question the number of positions, but suggests they’re not all staffed, so service is piecemeal.

"The health region has had a struggle in filling the positions for the required numbers," she said.

"There’s been virtually no movement in those areas. Residents require assistance and virtually there is very little to none available.

"The families are really struggling in the community."