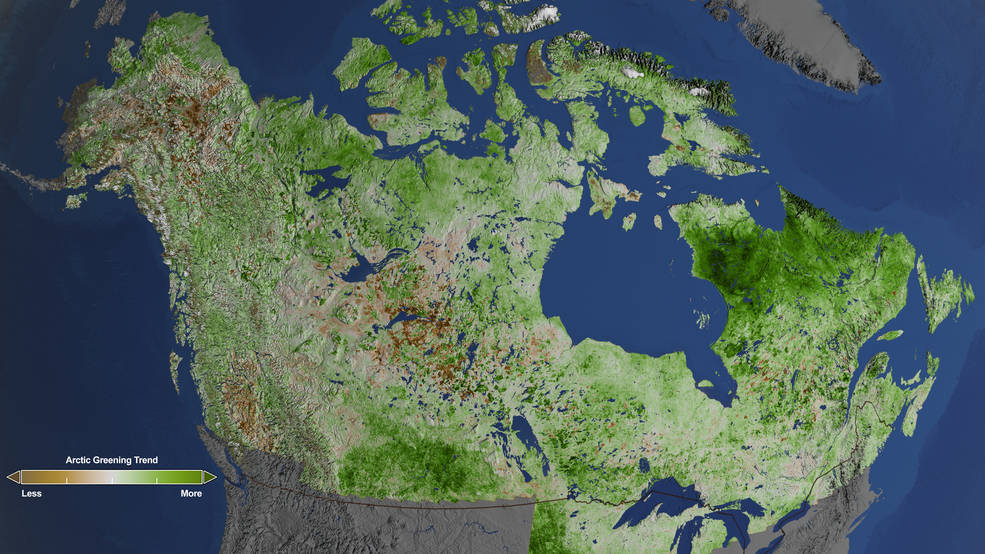 Northern Quebec is greening faster than other parts of the Arctic in North America due to climate change, according to new research released by NASA, but scientists are still trying to figure out why.

Nearly a third of the land cover - much of it Arctic tundra - is looking more like landscapes found in warmer ecosystems, according to the study that used 87,000 images from Landsat satellites to study the ground cover.

The researchers found that western Alaska, Quebec and other regions became greener between 1984 and 2012.

“It shows the climate impact on vegetation in the high latitudes,” said Jeffrey Masek, a researcher who worked on the study and a Landsat 9 project scientist at NASA’s Goddard Space Flight Center in Greenbelt, Maryland.

The Arctic’s fast-warming temperatures have created longer growing seasons for plants, resulting in grassy tundra changing to shrub lands and shrubs growing bigger and denser. Such changes could have impacts on regional water, energy and carbon cycles.

In fact the latter is the focus of a new study from U.S. Geological Survey that raises questions about what warming might do to the vast amounts of carbon stored in the north’s trees, water and soil.

While large, more intense wildfires may send up large amounts of carbon in the north, Arctic greening could pull more carbon out of the air.

While that might initially sound like good news, the report does not account for methane emissions from lakes, and carbon from the north’s wetlands could increase atmospheric warming, the report’s authors told the Washington Post.

"For those who have been following the climate debate closely, it’s an unexpected conclusion — and one that climate change skeptics and doubters might trumpet as a classic case of an alarmist climate scenario not coming to pass after all," Washington Post reporter Chris Mooney, wrote in an analysis of the new research. "If you dig down into the fine print, though, there remain many uncertainties — and many continuing reasons for concern about what will happen to stored carbon in Alaska and across the frozen north."

The Landsat data showed NASA’s Masek and his colleague, Junchang Ju, a remote sensing scientist at Goddard, extensive greening in the tundra of western Alaska, the northern coast of Canada, and the tundra of Quebec and Labrador.

The scientists found that 29.4 per cent of the region was greener, while only 2.9 per cent showed a decline in vegetation over the 4.1 million square-mile area.